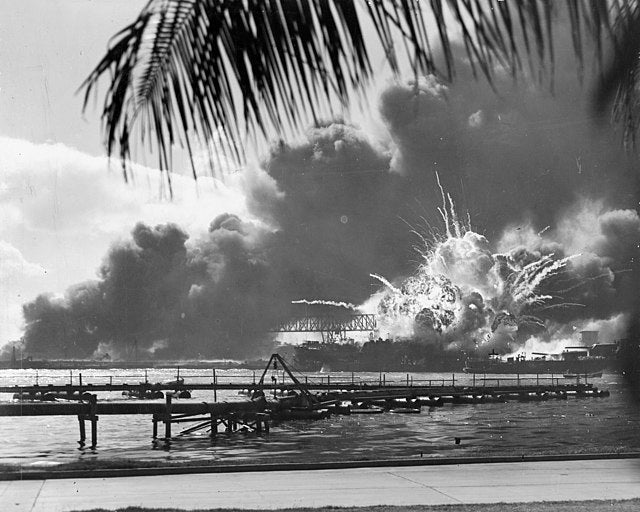 On December 7, 1941, the Japanese surprise attack on Pearl Harbor brought the United States into WWII. 2,403 Americans were killed, including 68 civilians. On that day, USS Oklahoma (BB-37) was moored in berth Fox 5 on Battleship Row. The Nevada-class battleship was a primary target for Japanese planes from the aircraft carriers Kaga and Akagi.

Oklahoma was struck by two torpedoes in quick succession at the start of the attack. However, her anti-torpedo bulge took the brunt of the hits. Neither torpedo penetrated Oklahoma‘s hull. As the crew poured anti-aircraft fire into the sky, a third torpedo struck. This time, the torpedo penetrated the hull, destroying fuel bunkers and rupturing boiler rooms. As Oklahoma began to capsize to port, two more torpedoes struck. Sailors attempting to abandon the sinking ship were strafed by Japanese aircraft. By the attack’s end, 429 sailors assigned to the Oklahoma were killed or missing. However, thanks to the tireless efforts of the Defense POW/MIA Accounting Agency, the remains of three missing sailors have been identified.

From December 1941 to June 1944, deceased crewmen from the Oklahoma and other sunken vessels were recovered and interred in the Halawa and Nu’uanu Cemeteries. In September 1947, the American Graves Registration Service disinterred the remains of these fallen servicemen and transferred them to the Central Identification Laboratory at Schofield Barracks. Although the AGRS was able to confirm the identities of 35 missing Oklahoma crewmen, 46 remained unidentified and officially missing.

In 2015, DPAA exhumed the unidentified remains for further dental, anthropological and DNA analysis. On April 23, 2020, Seaman 2nd Class Floyd D. Helton was accounted for. The 18-year-old Kentucky native is now officially listed as killed in action. On March 3, 2021, two of Helton’s fallen shipmates were also accounted for. Seaman 1st Class David F. Tidball, 20, and Fireman 1st Class Walter S. Belt, Jr., 25, are now officially listed as killed in action as well. DPAA announced the confirmations in separate press releases in June 2021. The names of the three sailors are inscribed on the Courts of the Missing at the National Memorial Cemetery of the Pacific. Rosettes will be placed by their names to indicate that they have been accounted for.

Featured image: A navy photographer snapped this photograph of the Japanese attack on Pearl Harbor in Hawaii on December 7, 1941, just as the USS Shaw exploded. The stern of the USS Nevada can be seen in the foreground. Wikimedia Commons.