7 solid reasons why combat veterans should open a business 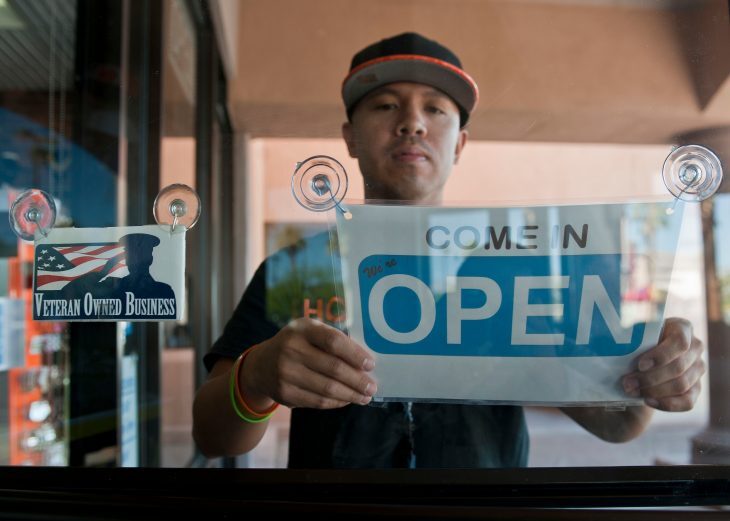 Whether it’s after four years or twenty plus years, everybody gets out of the military. It can be daunting to figure out what to do after. Of course, if one retires, that can be it. However, most veterans are uncomfortable being inactive even if they have that option. Which is a good trait to have in entrepreneurship. In fact, the past decade has shown an increased push to have small business training, mentorship and access to funding than ever before.

Naturally, the character traits honed in military service make veterans a force to be reckoned with in the workplace. Combat veterans often feel like they don’t have to prove anything to anyone, which is correct in theory but counterproductive in practice. Civilians don’t know what they don’t know about you. Some combat veterans are fine with doing the job to the best of their ability, getting a check and going home. There is nothing wrong with that.

Yet, combat veterans can always do more, they know they can captain the ship. Non-combat arms-related military occupational specialties provide the advantage of their service years count as experience, where typically grunts do not. In 2014, when I was a freshman in college I applied to a famous sci-fi themed electronic store in Burbank to sell TVs. The hiring manager told me that my military experience did not count as real job experience — to sell TVs — An entry-level job position. From that point on, I knew assimilation to the civilian world would require patience and understanding that is not given to veterans. Some employers just will not hire you because of your service and they hide behind the fact it’s almost impossible to prove it.

2. Be the boss a civilian can never be

“I want to hire veterans because they’re bad ass, not because somebody feels bad for them. No! You get some meateaters sitting at the table, you’re going to get a lot of stuff done. You’re going to do it and you’re going to have a lot of fun doing it. You can trust that they’re going to deliver, because they told you they were going to do it. That’s the advantage of hiring vets, as a vet, because you have this common starting place. They still have to earn their spot, but if I have a former grunt platoon sergeant or 0369 that doesn’t know how to get out after it, I’m going to know pretty quick. There are a lot more of the guys who do know how to get out after it and get it done responsibly with high integrity. Tons of opportunity there.”

Looking back at my own employment history, I do not think I ever worked for anyone who wasn’t a veteran. The stigma against combat veterans in particular makes the already small pool of jobs harder to break into. However, as a small business owner, you know what it takes to have been an 0311 or 11B infantryman. You know it’s more about problem-solving with limited intel and making it work with the resources and information at hand. Civilians have a hard time grasping that, and those that do, see you as a threat to their own jobs.

Veterans in a position of leadership often get the best out of their teams because they treat them like people. The end justifies the means, as long as the law isn’t broken. Improvise, adapt, overcome. As a veteran entrepreneur, you can pay your success forward by giving another veteran employment without worrying if they will let you down. Nine times out of ten you’re going to get a motivated warrior loyal to you and your business.

Business is trust. I trust you to do what you say you’re going to do and you trust me to do what I say I’m going to do – but here’s a contract in case that trust is broken. It’s about integrity.

“It doesn’t matter what you know, it’s who you know.” There is some truth in that saying because, unlike the military, your proficiency at your job is not enough. Even the field with networking with other veterans and civilians. Although I do not like that word, networking –because it sounds insincere — it is necessary as an entrepreneur. Networking in my mind is the process of finding allies in your industry or complementary industry that can provide a mutually beneficial trade of information. How can people support you if they do not know you exist?

Think back on your service. How many times were you able to do this or that because you had a buddy who was your connection? Same deal. You met at a sports club, a bar, through an acquaintance, school, event or a former job. Combat veterans have a form of charisma that is like magnetism for respect. Your service has earned you the benefit of the doubt, now prove you deserved it in the first place. Over the years, these business relationships can evolve into professional friendships. How many times have you heard a famous CEO say his friend is a CEO somewhere else? It doesn’t happen by accident and it didn’t happen overnight.

The SBA offers support for veterans as they enter the world of business ownership. Look for funding programs, training and federal contracting opportunities.

“I do not know the answer but I know how to find it” is my favorite phrase from the military. One of the first steps to creating a business is a business plan. The Small Business Administration was created in 1953 as a federal agency to provide counseling, capital and contracting expertise in regard to small business. It also has a mission to support veteran-owned businesses by guiding them to specific advantages one would not know of otherwise.

Combat veterans googling where to start will find their first step here. It takes initiative and follow-through but the information is out there. The SBA has gotten better at providing resources to veterans in the past decade. The only thing better than finding a job is creating one.

The Vets First Verification Program affords verified firms owned and controlled by Veterans and Service-disabled Veterans the opportunity to compete for VA set asides. During verification, the Center for Verification and Evaluation (CVE) verifies service-disabled veteran-owned small businesses (SDVOSBs)/VOSBs according to the tenets found in Title 38 Code of Federal Regulations (CFR) Part 74 and 13 CFR Part 125 that address Veteran eligibility, ownership and control. In order to qualify for participation in the Veterans First Contracting Program, eligible SDVOSBs/VOSBs must first be verified.

The VA is improving by leaps and bounds every year. The VA of today can and will help you with your small business attain government contracts by partnering with the VA itself or other agencies. It is safe to say that even the smallest of government contracts bring in a good amount of money, especially when you have multiple, recurring contracts with the peace of mind that Uncle Sam is not going to default.

Finally, the biggest advantage of starting your own business is that you do not have a chain of command to answer to. No bosses, no corporate ladder. Freedom to create your own client base and decide who you do or don’t want to do business with. You have the freedom to succeed or fail and it all rests on your determination. It is not easy and the road ahead is full of danger but veterans are cut from a different cloth. Combat veterans did not shy away from the insurgents, so why fear some paperwork?

If it takes breaking night with the coffee maker churning out beverages at the cyclic rate, veterans will get it done. You’ve been there, done that. When you’re on active duty, you do your best because anything less is shameful. You don’t want to fail others. In the civilian world, you do your best because you do not want to fail yourself. As a small business owner, you have the freedom to follow your dreams.