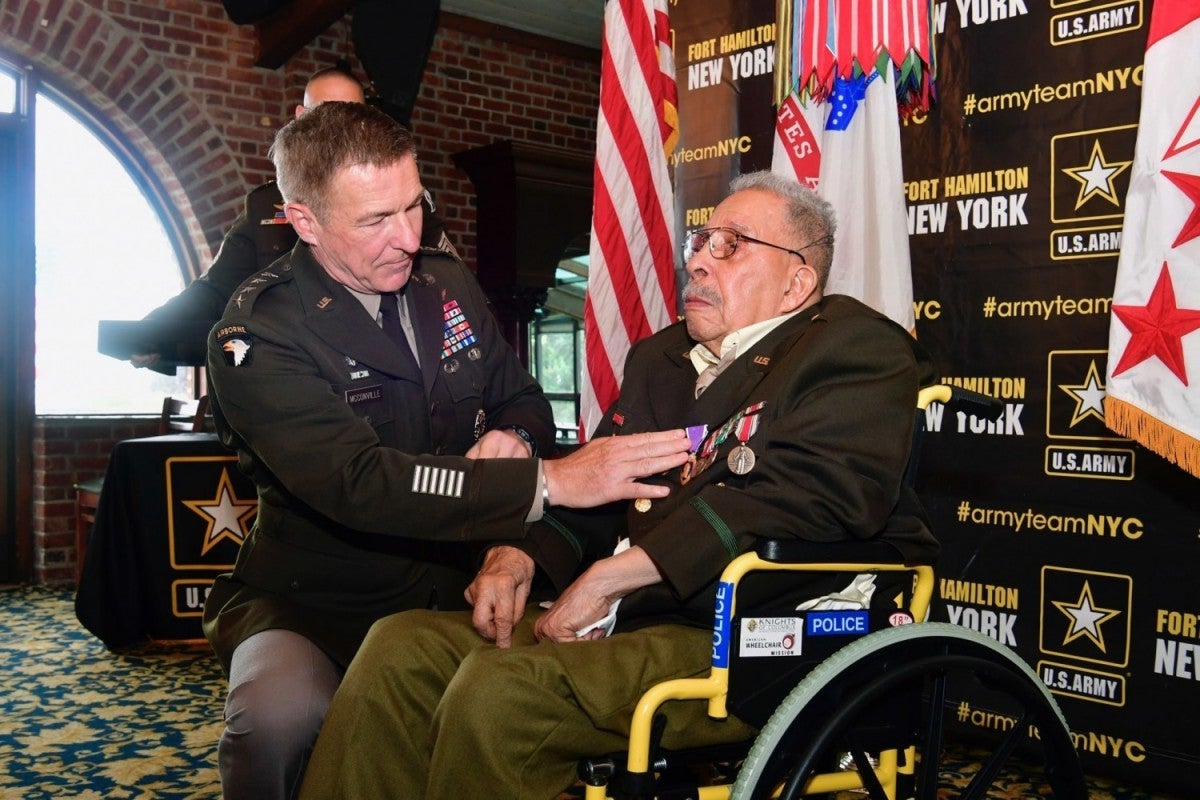 A 99-year-old World War II veteran was the guest of honor at Fort Hamilton in Brooklyn, New York this past June. Osceola “Ozzie” Fletcher was on hand to finally receive the Purple Heart for a wound he suffered on D-Day, June 6, 1944.

Fletcher was part of a vehicle convoy delivering supplies to fellow soldiers fighting in the fields beyond the beachhead that day. His vehicle was hit by a German missile attack, destroying the vehicle, killing the driver and leaving a large wound on Fletcher’s forehead.

“Soldiers tragically died that day, but Ozzie was thrown to safety and survived,” said Army Chief of Staff Gen. James. C McConville, who was on hand to present the wheelchair-bound veteran with the Purple Heart. “He suffered multiple wounds that day, including a head gash that still serves as a reminder.”

The elderly veteran was a member of the segregated 254th Port Battalion, and his wound should have earned him a Purple Heart. The racism that pervaded the U.S. military back in those days was part of the reason he was denied the honor.

To receive the award during World War II, the soldier’s wound must have been a result of hostile enemy action and require treatment by a medical officer. As such, it would have been documented in the soldier’s records, but Fletcher’s wound was treated as an “injury” and he was not seen by a doctor. He was never hospitalized and there was no official record it.

During his Purple Heart ceremony, Army leaders acknowledged the denial was the result of injustice and gave Ozzie Fletcher praise for his service and his sacrifice.

“Today, we pay long overdue tribute for the sacrifices he made to our nation and for free people everywhere,” said McConville.

According to Fletcher’s family, the old veteran was never really vocal about his wartime service in the decades that followed the end of World War II. He returned to the United States, first as a high school teacher and then with the New York Police Department.

Around the turn of the millennium, Fletcher began to speak out about his time spent in the war. After a visit to Normandy, he decided to start talking. He told his family about the racism and prejudice he faced in the Army during the war, and how he never received his Purple Heart.

“It really hit him that he wanted to be heard,” his daughter, Jacqueline Streets said. “He wanted the truth to be known. He wanted to be validated and acknowledged.”

The award finally came as a result of Fletcher’s participation in a World War II documentary film from producers Ryan Soref and Henry Roosevelt called “Sixth of June.” They learned about Fletcher’s denied Purple Heart and reached out to Chairman of the Joint Chiefs of Staff Gen. Mark Milley, who opened a two-month investigation into the issue.

Milley’s investigation revealed the injustice against Fletcher and another D-Day veteran in a segregated unit, 101-year-old warrant officer Johnnie Jones of Louisiana. The finding comes from two eyewitnesses and documentation of the incident. Both men were awarded their overdue medals.

“I’m exhilarated by the whole thing,” Fletcher said following the ceremony. “It shows that some of the records did get through… It’s about time.”