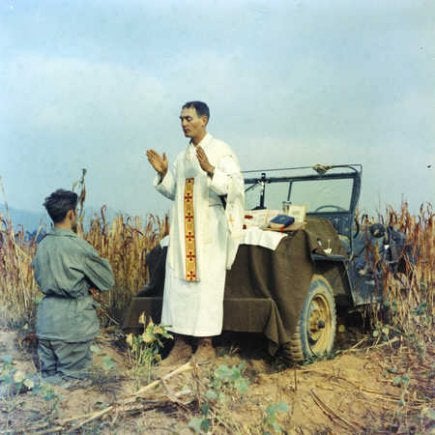 Kapaun was called to serve as a U.S. Army chaplain during World War II and he answered that call. As the war ended and the United States entered a conflict in Korea, he stayed in the Army to shepherd his soldiers through their most trying times.

He was with them until the end, but what exactly happened to him wasn’t really known until an entirely new century had turned.

As a new chaplain, Kapaun didn’t make it to World War II until 1945, when he arrived in the China-India-Burma theater of the war. But he didn’t turn around and go home. He crossed thousands of miles in little more than a year to go wherever there were GIs in the theater. He went home in 1946 and briefly left the Army to continue his education.

By 1948, however, he was back in a chaplain’s uniform, spending time at Fort Bliss before shipping off to occupied Japan in 1950. This was the year everything would change. North Korean tanks invaded South Korea that same year, and the war nearly pushed the South and its American allies into the Sea of Japan.

Emil Kapaun was in Korea a month after the Korean War started. Kapaun and his assistant did more than tend to the spiritual needs of the men in their care. They picked up stretchers and became litter bearers during combat as the Battle of the Pusan Perimeter raged around them.

When United Nations forces managed a breakout and Gen. Douglas MacArthur landed a significant western force at Inchon, Capt. Kapaun marched north with the rest of the United Nations. He was there when they crossed the 38th parallel into North Korea, when they captured Pyongyang. He helped rescue the wounded and retrieve the dead and dying.

When Kapaun and the 1st Cavalry came within 50 miles of North Korea’s border with China, the Chinese intervened in the war. His unit was surrounded by 20,000 Chinese soldiers and Kapaun stayed with 800 men who were cut off from the main force, despite pleas for his own escape. Braving the enemy’s unending heavy fire, he rescued 40 of his comrades in arms.

His daring rescues in the face of hostile fire earned Emil Kapaun the Medal of Honor. He would never live to receive the award, however. He and other members of the 3rd Battalion, 8th Cavalry Regiment were captured by the Chinese and marched more than 80 miles to a North Korean prisoner of war camp.

While a prisoner, Kapaun did everything he could to improve the lives of the men held there. As they fought hunger, disease and lice, their chaplain dug latrines for them, stole food and smuggled necessary drugs into the camp. But even he was feeling the harshness of prison camp life and eventually succumbed to malnutrition and pneumonia. His remains were left in a mass grave near the Yalu River, along North Korea’s border with China.

After the armistice that ended the fighting on the Korean Peninsula went into effect, Kapaun’s remains, along with the others interred at the mass grave site were repatriated to the United States. Since his were unidentifiable, they were buried in Hawaii’s National Memorial Cemetery of the Pacific.

In 2018, the Defense POW/MIA Accounting Agency launched the Korean War Disinterment Project, an all-out effort to identify the remains of Korean War remains in a seven-phase plan. On March 4, 2021, Capt. Emil. Kapaun, Medal of Honor recipient and future Catholic saint, was positively identified.