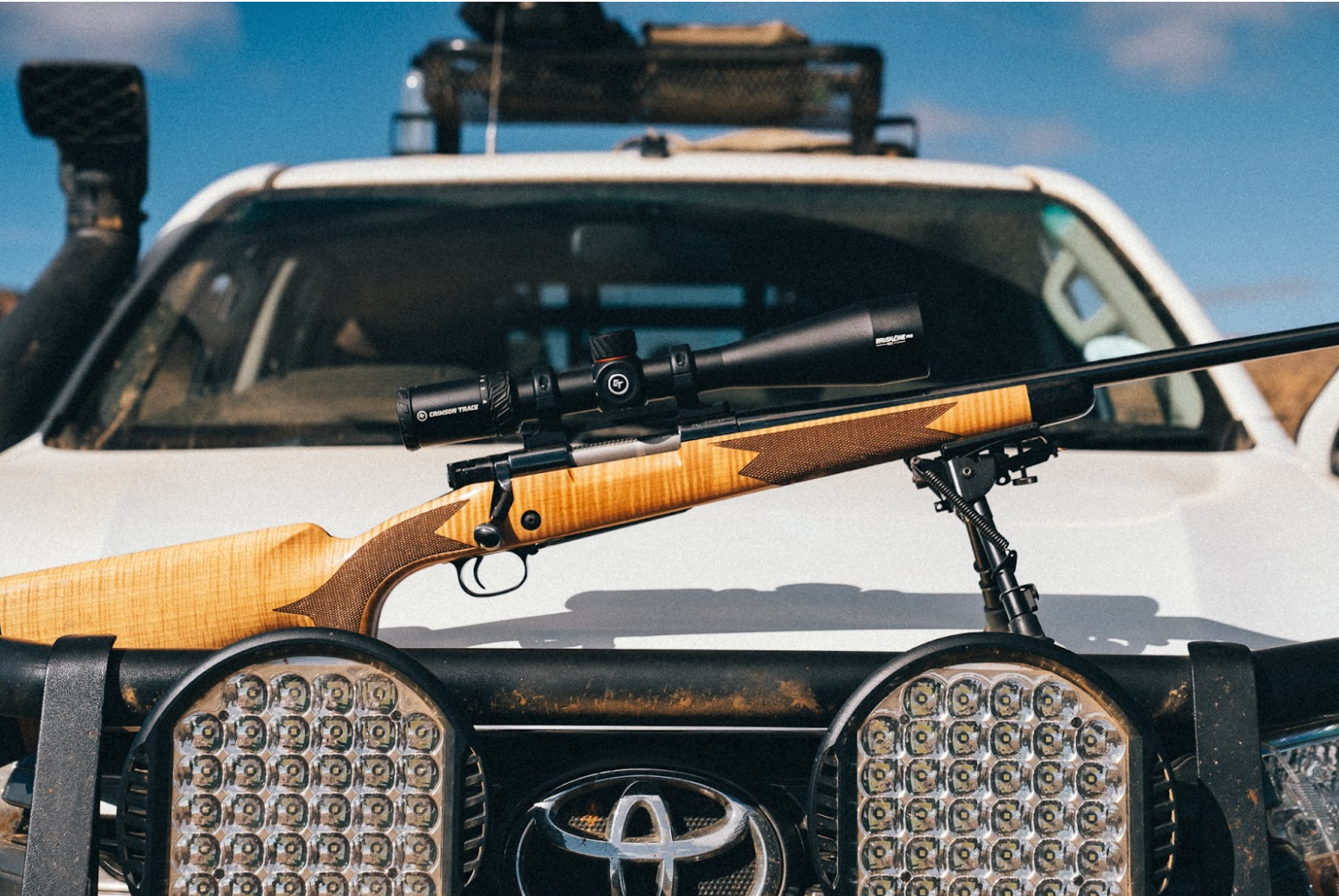 Ever hear the old saying, “Spend $100 on the gun and $1000 on the scope”? Sounds like something your grandfather would have said during a hunting trip as a young kid. Although there is some truth to that saying, spending $1000 on a scope is just not realistic for most people.

As technology has advanced, Crimson Trace has answered the call with an affordable line of hunting scopes, the Brushline and Brushline Pro series. Both Brushline series confidently stand toe-to-toe with many of the more expensive brands.

Let’s take a closer look at the Crimson Trace Brushline Pro BDC scope and see what makes it so great.

The 6-24x Brushline Pro covers everything from hunting whitetail deer in the midwest to taking larger game at distance out west. I spent 5 hours at the range with a friend of mine and we attached my new Brushline Pro 6-24×50 BDC scope to his legendary 71′ Browning BLR.

I’m a sucker for lever-action rifles and my friend’s Browning BLR didn’t disappoint with the Crimson Trace Brushline Pro scope.

I was incredibly excited to get a chance to shoot this rifle with the new rifle scope sitting on top. Hope you enjoy reading about the Crimson Trace Brushline Pro rifle scope as much as I’ve enjoyed shooting with it.

I’ve been a fan of Crimson Trace since the first laser grip that I bought a few years ago. Their customer service is great, packages always come in impressive packaging. This is no different when I opened the Brushline Pro packaging.

The Brushline Pro series features a unique style of BDC reticles that make it easier to adjust your shots, based on weather, elevation or distance.

My first thought when I opened this package was if a company is putting that much effort into their packaging, they must want to really protect what’s inside.

My first words when I opened the box and saw the packaging were, “Wow, I hope the scope is as nice as the presentation.”

The packaging with the addition of the stabilizing bands for the scope was a really nice touch. It’s great to know this scope is going to be in great condition upon arrival, you can’t say that for every company’s packaging and presentation.

How good is the BDC Reticle on the Brushline Pro?

Before we get too involved, I want to cover the basics.

BDC scopes work by using a reticle pattern that predicts how much a bullet will drop at a given range. One of the biggest reasons I bought the Crimson Trace Brushline Pro was due to its unique BDC reticle.

I love the idea of a BDC reticle because it takes a lot of pressure off my inability to do any kind of math whatsoever.

The Crimson Trace BDC reticle is so good because the diamond shape of the BDC makes it incredibly easy if you follow the manual and lettering of each mark.

How Many Shots to Zero the Brushline Pro?

The Crimson Trace BDC reticles are designed to be 100 yards apart for use with any centerfire rifle and 50 yards if you’re using a rimfire rifle, such as the most common .22LR.

At first, we shot about 10 rounds to see if we could zero the scope in without any help from the manual. It didn’t go very well for us because we were unable to zero in the scope without reading the manual first.

Once we read the manual, it took 1 shot to zero in the Brushline Pro 6-24×50 scope. As you can see from the target below, My friend’s first shot is right above the center target at 100 yards. I gave him the manual and he made his adjustment with the following 2 shots in the center of the bullseye.

He was able to make these fast adjustments, in part, due to the aggressive knurling on the turrets. These knurls on each turret allow you to grip them with either bare hands, spring lightweight gloves, or even winter gloves.

As you can see from the picture below, the markings for each adjustment are clearly stated and easy to make with the added texture of the aggressive knurling.

How Accurate is the Brushline Pro Scope?

There are many things to be impressed with this scope, but my biggest surprise was how accurate the BDC reticles were. Once we read the manual and realized we’ve never shot a BDC scope with a hunting rifle, our adjustments were spot on.

Shooting a rifle that was created over 50 years with commercial ammo and still is able to maintain the level of accuracy is incredible. Obviously, the rifle is a legend and deserves its due, but I’ve never seen a scope under $900 that performed like the Crimson Trace Brushline Pro.

We shot at 100 yards, and 200 yards with 20 shots each, and the accuracy never strayed. Since I wanted to get as accurate a test as possible, I used the exact ammo specifications that Crimson Trace recommends for this scope. We used Federal SP 150 Grain .308 ammo and each shot 3 boxes each after zeroed in.

At 210 yards, both of us were shooting consistently at just under 2 MOA. That’s on par with what Crimson Trace claims. As someone who reviews guns, gear and optics every week, I’m rarely this impressed.

For us in the Midwest and eastern United States, 200-yard shots on a living, moving animal is a long shot. Our forests are dense and rarely offer clear shots past 200 yards.

If you’re planning a western big game hunt where your shot could potentially be out past 300 or 400 yards, then you want the 6×24 Brushline Pro to be on top of your rifle.

Is the Brushline Pro the best scope under $600?

I almost feel like I’m doing a disservice to the scope by saying it’s the best one under $600. I asked my friend what he thought the scope was worth after shooting it and he said he’d pay $900-$1,000.

After shooting with this scope and knowing I can make an accurate adjustment anywhere from 50 yards to 500 yards reminds me of the rifle scopes that are 2-4x more expensive.

I’d love to find a scope for under $600 that can offer me the consistency, accuracy, and versatility that could match the Brushline Pro. However, If you want a BDC reticle for making quick and effortless adjustments while maintaining sub MOA accuracy at 100 yards, this is the scope for you.

Why should I buy the Brushline Pro BDC Scope?

It’s always nice when you receive a scope and it’s wrapped like the Brushline Pro, but it’s much better when the scope works exactly as they claim.

I’ve only owned the scope for a month, but it feels like it’s going to last and do great things for me this fall whitetail season. I can’t wait to see how all the nice features workout throughout over the next couple of years.

Which environment is best for the 6-24×50 Brushline Pro?

The 6-24×50 Brushline Pro is at home hunting large game out west in states such as Colorado, Nebraska or Wyoming where you have wide-open swaths of land.

Yes, you could use it on smaller game such as whitetail deer, but to really see this scope perform in its intended environment, schedule yourself a big game hunt.

A rifle scope is one of the most important pieces of gear you can invest in for the hunting season.

While this Crimson Trace scope might not catch the eye of a gun connoisseur, it will, without a doubt, perform when it needs to.

With clear glass, a crisp BDC reticle, and accurate adjustments, I would be confident in using this scope on any big game hunting expedition no matter the conditions.