Bob Dole, longtime senator and WWII hero, dies at 98 - We Are The Mighty 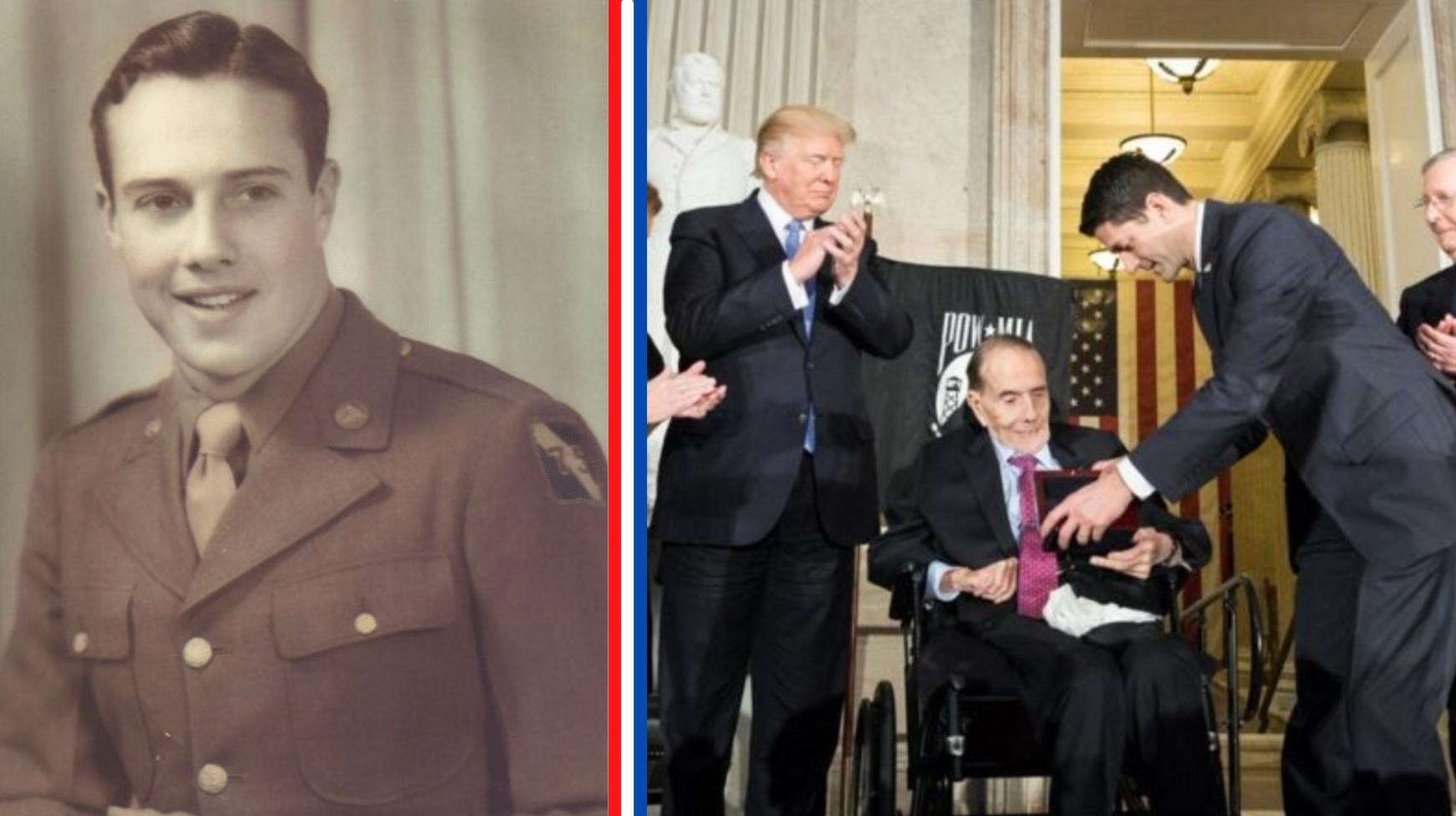 Bob Dole represented the state of Kansas in the U.S. Senate for 27 years from 1969 to 1996. During his time in office, Dole served as the Republican Leader of the United States Senate for 11 years, including three nonconsecutive years as Senate Majority Leader. Dole was also the Republican vice presidential nominee in the 1976 election and the presidential nominee in the 1996 election. Prior to becoming a lawyer and politician, Dole served in WWII with distinction in the Army’s famed 10th Mountain Division.

Robert Joseph Dole was born on July 22, 1923 in Russell, Kansas. He graduated high school in 1941 and was recruited to play for he University of Kansas basketball team. A star athlete, Dole was also on the school’s track and football teams. However, America’s entry into WWII interrupted his collegiate career and Dole joined the Army.

In 1942, Dole was commissioned as a 2nd Lt. in the 10th Mountain Division. In April 1945, during heavy fighting near Castel d’Aiano in the Apennine Mountains southwest of Bologna, Italy, Dole was seriously wounded. Shrapnel struck his upper back and right arm, shattering his collarbone and part of his spine. “I lay face down in the dirt,” Dole later recalled of the event. “I could not see or move my arms. I thought they were missing.”

When his fellow soldiers saw him, they thought Dole was done for. They gave him a large dose of morphine to make his death comfortable and wrote an “M” on his forehead in blood to indicate the administration of the drug. Paralyzed from the neck down, Dole miraculously survived and was transported to a military hospital near Kansas. Still, doctors did not expect him to survive his wounds. Blood clots, a life-threatening infection, and a fever of 109 degrees all threatened to end Dole’s life.

Depressed with the state of his health and the end of his athletic career, Dole was advised to see Dr. Hampar Kalikian, a Chicago orthopedist working with veterans returning from the war. Kelikian, a survivor of the Armenian genocide, inspired Dole to focus on what he still had and what he could do with his life rather than what he had lost. A skilled surgeon, Kelikian also operated on Dole seven times without charge and helped him recover from both his physical and mental wounds.

In 1947, Dole was medically discharged from the Army as a captain. His war wounds left him with limited mobility in his right arm and numbness in his left arm. Dole earned two Purple Hearts and the Bronze Star with “V” Device for valor for his attempt to save a downed radioman.

Determined to forge a new path for himself, Dole attended the University of Arizona from 1948 to 1949. He later transferred to Washburn University where he graduated with both undergraduate and law degrees in 1952. His first time running for office in 1950 was a success and he was elected to the Kansas House of Representatives. During his tenure, he was a supporter of the Civil Rights Acts of 1964 and 1969 as well as the Voting Rights Act of 1965.

In 1968, Dole was elected to the U.S. Senate. During his time in office, he served as chairman of the Republican National Committee from 1971 to 1973 and was elected as the Senate Majority leader in 1984. Dole resigned from the Senate on June 11, 1996 to focus on a presidential campaign.

In 1976, Dole unsuccessfully ran for vice president on incumbent Gerald Ford’s ticket. During the next election, Dole ran for the 1980 Republican presidential nomination but lost to Ronald Reagan. His third attempt at the nomination in 1988 ended much the same against George H. W. Bush. However, in 1996, Dole became the first sitting Senate Party Leader to receive his party’s presidential nomination. Despite a decisive loss to incumbent Bill Clinton, Dole remained magnanimous in defeat and decided to leave politics.

Owing in part to his good sense of humor, Dole’s post-politics career included writing, consulting, public speaking, and television appearances. His defeat as a presidential candidate made him a political celebrity. Dole became a commercial spokesman for Visa, Dunkin’ Donuts, and even appeared in a Pepsi commercial with Britney Spears. He also served as the head of an economic development council in Washington, D.C. and worked as a lobbyist. Dole was also involved with volunteer organization like the World War II Memorial Campaign which raised funds for the construction of the National World War II Memorial in D.C. In 2001, he teamed up with his former political opponent, Bill Clinton, on the Families of Freedom Foundation to award college scholarships to the families of 9/11 victims.

Dole was awarded the Presidential Citizens Medal by Ronald Reagan in 1989 and the Presidential Medal of Freedom by Bill Clinton in 1997. During the latter award ceremony, Dole joked, “I had a dream that I would be here this historic week receiving something from the president — but I thought it would be the front-door key.” He displayed his humor again in 2019 when Congress unanimously promoted him from captain to colonel at the age of 95. “I’ve had a great life and this is sort of icing on the cake. It’s not that I have to be a colonel; I was happy being a captain and it pays the same,” he said.

In February 2021, Dole was diagnosed with stage IV lung cancer. He received immunotherapy but forewent chemotherapy due to its negative effects on his body. Dole died from the disease in his sleep on December 5, 2021 at the age of 98. For all of his military and political accomplishments, Dole would likely want to be best remembered for his determination and sense of humor.