Dusty Kleiss, the aircraft carrier killer of World War II - We Are The Mighty 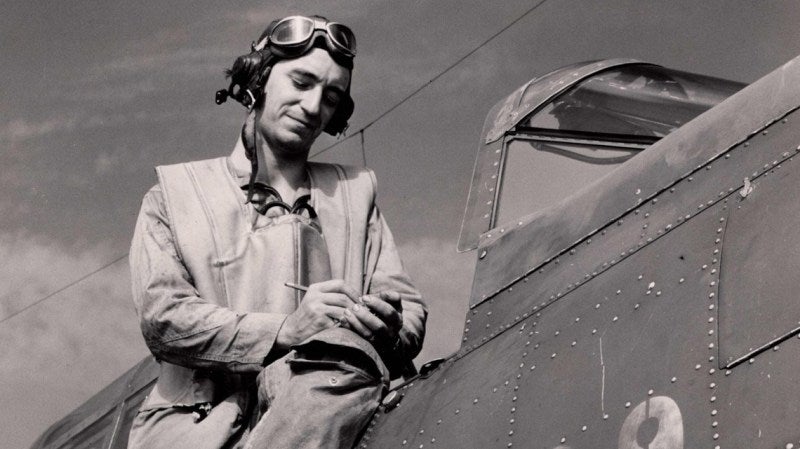 Norman J. “Dusty” Kleiss was a dive-bomber pilot in the United States Navy during World War II. He fought in the Battle of Midway where he was the only dive-bomber pilot to hit two Japanese aircraft carriers and a cruiser.

Kleiss was awarded the Distinguished Flying Cross and the Navy Cross. He served in the Navy until retiring as a captain. He lived to be 100 and the last surviving dive-bomber pilot from the Battle of Midway.

Dusty Kleiss was born in Coffeyville, Kansas on March 7, 1916. In his diary, he writes that he learned to be a crack shot with a BB gun before he could ride a bicycle. He worked as an apprentice toolmaker while waiting for his appointment to the U.S. Naval Academy.

At an early age, he learned of the importance of airpower. At the age of 15, he joined the 114th Cavalry of the Kansas National Guard. During an exercise at Fort Riley, KS, his unit was wiped out when the opposing force used aircraft to “strafe” his unit that didn’t have any aircraft of its own.

In June of 1938, he graduated from Annapolis. In those days, the Navy required new ensigns to serve in the fleet for two years before attending flight school. The reasoning was that aviators had to know the strengths and limitations of the surface fleet.

So, Dusty Kleiss served on the cruiser USS Vincennes and destroyers USS Goff and USS Yarnall.

At the end of the two years, Dusty went to Pensacola Naval Air Station, FL, for flight training. After 11 months of flight training, he earned his wings on April 27, 1941. One of the more important lessons that he learned was the art of dogfighting, which would serve him well later during the air battle over Midway.

Read Next: Book excerpt: ‘Never Call Me a Hero: A Legendary American Dive-Bomber Pilot Remembers the Battle of Midway’

After graduating from Pensacola, Dusty Kleiss was assigned to Scouting Squadron Six (VS-6), the scout-bombing squadron assigned to USS Enterprise (CV-6). Kleiss and the other Scouting Six pilots flew the Douglas SBD Dauntless Dive Bomber, a two-seater that had a rear-facing gunner in the back.

The Enterprise headed for Hawaii. There the men began training in earnest for the war that everyone knew was coming. Kleiss earned his nickname just a month later after a landing of his caused an inordinate amount of dust blowout.

The First Engagement of Dusty Kleiss

When the Japanese attacked Pearl Harbor on December 7, 1941, their primary targets, the American aircraft carriers, were not in port. However, the carriers’ scouting squadrons did engage with Japanese aircraft off the coast of Hawaii and lost six pilots and gunners during the battle. On December 8, Dusty Kleiss was fired upon by nervous American gunners over Pearl Harbor who had mistaken his SBD for a Japanese aircraft.

Kleiss saw his first action during the Battle of the Marshall Islands (February 1, 1942), where he attacked the Japanese base at Kwajalein Atoll. During the airstrike by the Enterprise’s aircraft, Kleiss’s Dauntless SDB dropped his incendiary wing bombs on a parked plane at Roi Airfield and then dropped his 500-pound bomb on the light cruiser Katori. During a second strike at the Japanese base at Taroa Island, his plane was hit by anti-aircraft fire, and his rear gunner John W. Snowden was wounded in the buttocks.

Kleiss also took part in the air raids during the Battle of Wake Island on February 24, 1942, attacking the Japanese who had captured the island from American Marines in the first few weeks of the war.

Upon returning to Pearl Harbor, Kleiss was awarded the Distinguished Flying Cross for his attack on Kwajalein Atoll.

The Battle of Midway and Dusty Kleiss Versus the Rising Sun

During the Battle of Midway,the United States had partially broken the Japanese Navy’s JN-25b code and had a good idea of the Japanese plans. This allowed the Americans to prepare. As a result, the American carrier force, consisting of the carriers Enterprise, Hornet, and the patched Yorktown, was already well on its way to meet the Japanese northeast of Midway.

But a mixup and early disaster set the stage for a crushing American victory. The Hornet’s torpedo squadrons attacked without fighter protection and were all shot down. The subsequent torpedo attack by the Enterprise’s antiquated Devastator torpedo bombers, with only six fighters as cover, was also shot to pieces.

Read Next: Doolittle Raid 75 Years Ago Was the Best Psychological Operation of the War

The Japanese carriers had their decks full of bombs and were preparing to attack the U.S. fleet. Dusty Kleiss was the second pilot to score a direct hit on the Kaga. He and his gunner Snowden lined up on the Kaga and used the red rising sun on the flight deck as their target. His incendiary bombs hit planes parked on the flight deck. His 500-pound bomb hit at the edge of the red circle and went four decks below before exploding, hitting long lance torpedoes. Kleiss nearly crashed into the ocean, barely pulling out of a dive as the Kaga erupted into a blazing inferno. A Japanese Zero immediately got on his tail, but tail gunner John Snowden shot it down.

Years after, Kleiss was asked to write an article about the battle. His excellent article is included in the 2012 Special Midway edition of The Daybook, the Hampton Roads Naval Museum’s quarterly publication.

“Wade McClusky waggled his wings and, in our Scouting Six planes, we followed him into a dive on Kaga, the closest carrier. This was the perfect situation for dive-bombing: no Zeros, no anti-aircraft fire. McClusky and our Scouting Six dive bombers attacked Kaga. Bombing Six planes attacked Akagi. Earl Gallaher scored the first hit on Kaga. I watched his 500-pound bomb explode on the first plane starting its takeoff. It was the only plane on Kaga’s flight deck. His incendiary bombs also hit the gas tanks beside it. Immediately, the aft part of the ship was engulfed in a huge mass of flames. I scored the next hit. My 500-pound bomb and two 100-pound incendiaries landed on the rear edge of the large red circle on the bow of Kaga. The bombs set fire to the closely-parked airplanes below deck, filled with gasoline; a huge fire started. (Note: my bombs hit the target at 240 knots, and exploded 1/100th of a second later!) I had dropped my bombs at 1,500 feet, and I pulled out at 9g, just barely skimming above the water.

A Zero came speeding for us. I gave my gunner John Snowden a good angle, and in two seconds, no more Zero! I sped past numerous ships shooting AA fire at me, so I changed course and altitude every second. I finally made a half-circle, heading towards Midway. I looked back and saw three carriers in flames: many bombs from Scouting Six and Bombing Six had hit Kaga; three bombs from Bombing Six had hit Akagi, and bombs from Yorktown’s dive bombers torched Soryu. Only Hiryu, 20 miles away, was unharmed.”

Dusty Kleiss and Snowden barely made it back to the Enterprise as their fuel was nearly gone. They quickly ate a sandwich, had a cup of coffee, and caught a quick catnap before they went back out searching for Hiryu, the remaining Japanese carrier.

The mission, commanded by Lieutenant Earl Gallagher, spotted the Hiryu who was conducting evasive maneuvers. But Kleiss knew that as a dive bomber, the key is not figuring out not where a ship is but where it’s going. Again, he lined up on the ship’s red circle, and in another steep dive, scored a direct hit.

“It was a bonfire that could be seen 10 miles away.” Although scoring direct hits on two Japanese aircraft carriers, Dusty Kleiss wasn’t done yet.

On June 5 they missed the Japanese fleet, but on June 6 Kleiss and the Enterprise’s dive bombers attacked the Japanese cruiser Mikuma. Kleiss’s bombs once again were spot on and struck near Mikuma’s smokestack. The Mikuna was a wreck, devastated from stem to stern with multiple bomb hits she soon sank.

Kleiss was the only pilot to score three direct hits with a dive bomber during the Battle of Midway. For his actions during the battle, Kleiss received the Navy Cross in November 1942.

That was his final combat mission. He was sent back to the United States to be an instructor assigned to an Advanced Carrier Training Group (ACTG) squadron stationed in Norfolk, Virginia. He then married his long-time girlfriend Eunice Marie “Jean” Mochon in Las Vegas and was moved on to the training squadron in Cecil Field, Florida.

The couple remained dedicated to each other until Eunice’s death in 2006. “She was three times as smart as me, that’s for sure,” Dusty said in an interview with CNN.

After attending the Naval Postgraduate School for aircraft design he worked on improving design features for aircraft, carrier catapult designs. He retired from the Navy on April 1, 1962, with the rank of Captain.

He worked as an engineer at the Allegany Ballistics Laboratory in Rocket Center, West Virginia for a few years before deciding to teach mathematics, physics, and chemistry at Berkeley Springs High School for 10 years. In 1987, he and his wife retired and moved to the Air Force Village, a retirement community located near Lackland Air Force Base, San Antonio, Texas.

Kleiss was frequently asked to be a guest speaker or guest of honor at functions regarding the Battle of Midway. Yet, he was not comfortable with being called a hero. He worked on his memoir Never Call Me a Hero: A Legendary Dive-Bomber Pilot Remembers the Battle of Midway. It was published after his death in 2017.

An excellent video interview with Kleiss can be seen here:

Dusty Kleiss lived in San Antonio until he died on April 22, 2016,  shortly after his 100th birthday. He is buried alongside his wife at Fort Sam Houston National Cemetery.