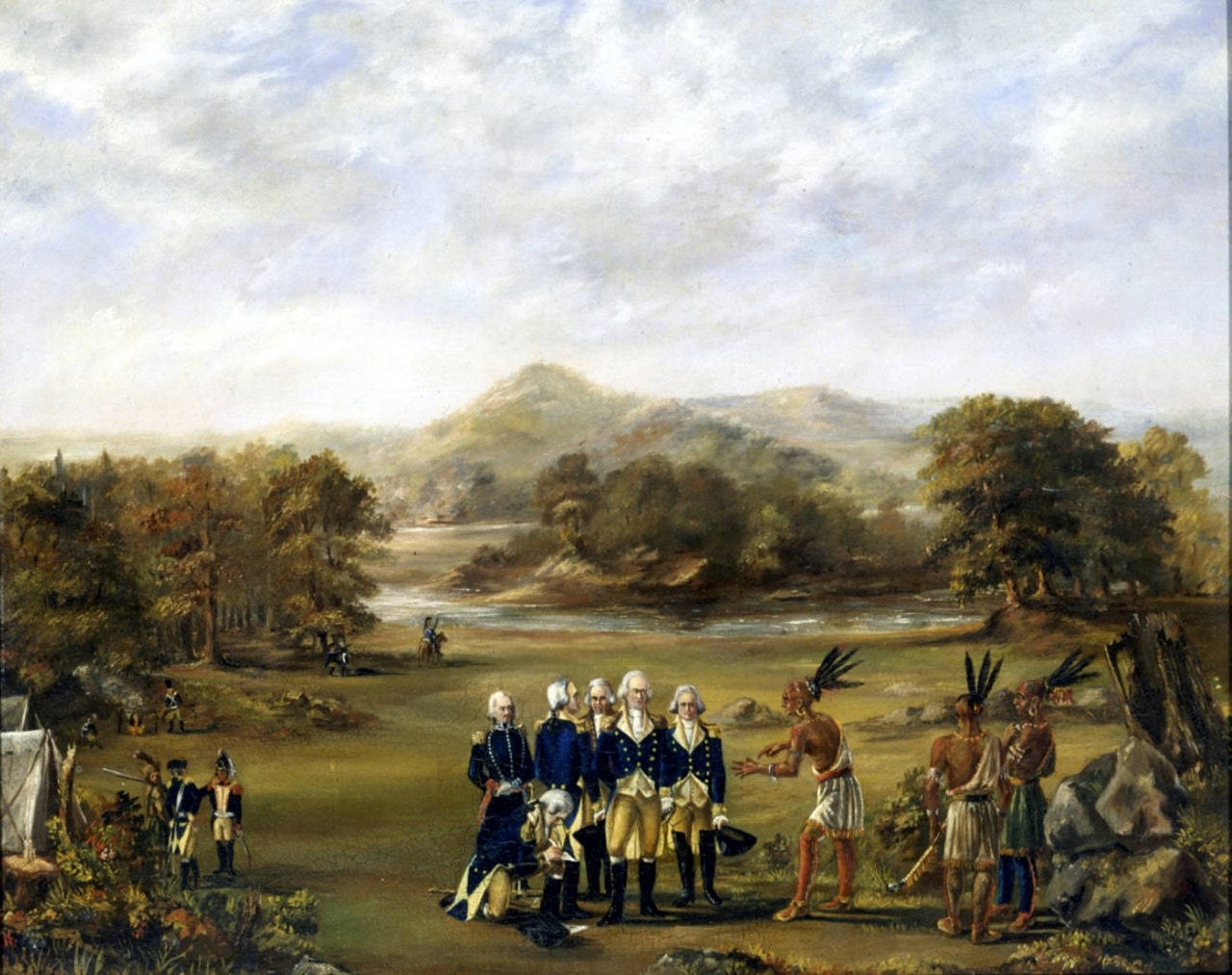 This depiction of the Treaty of Greenville negotiations may have been painted by one of Anthony Wayne's officers. (Public domain).

In 1791, the United States was still a very young country and its army was just as young. Just three years after the U.S. adopted its Constitution, Americans were facing their first crisis as an independent nation that came outside its borders.

American Indian tribes in the western frontier were attacking and murdering settlers in what was once called the Northwest Territory, an area that today is made of parts of Ohio, Indiana, Illinois, Michigan, Wisconsin and Minnesota. Many were sparked by British agents in the area, but some of the attacks came from genuine Indian alarm.

None of the tribes were more prominent than the Miami, led by the now-famous Sagamore named Little Turtle. The Miami tribe occupied parts of what is today Ohio, but was officially ceded to the U.S. government after winning the American Revolution. Little Turtle was among the first to push back against American encroachment.

To keep settlers from occupying the land controlled by his and other tribes, Little Turtle created a confederacy of tribes in the Ohio area that included the Shawnee, Delaware, Ottawa and Wyandot tribes. Little Turtle and his confederate forces won a string of victories over settlers and defenders in what became known as “Little Turtle’s War.”

As Little Turtle and his force won time and again, he gathered more warriors to his call to arms. A federal force ordered by President Washington and under Gen. Josiah Harmar marched on Ohio to put down the uprising but due to lack of supplies, they were soundly beaten. The failure of Harmar’s attack forced federal forces out of Ohio.

At the time of Little Turtle’s War, the founding fathers still believed that a standing army was a danger to the liberty of the people of the United States. This was one of the reasons the U.S. Army was all but dissolved at the end of the American Revolution. It also meant that the United States had to raise a sufficiently large enough force to counter the American Indian uprising.

In September 1791, Gen. Arthur St. Clair raised a force of around 1,500 men, including Kentucky militia and cavalry, to meet Little Turtle and his warriors where they live. St. Clair’s force met at Fort Washington in what is today Cincinnati and headed north in search of the Indian tribes.

At the time of the campaign, Gen. St. Clair was so sick, he could barely take command of the army. Along the way, he also instructed his force to build a series of fortifications that slowed his progress significantly. By November 1791, he was only 90 miles from Fort Washington and the temperature was beginning to drop.

With nearly freezing temperatures, dwindling supplies, and exhaustion from months of construction and marching, St. Clair’s force was weak and demoralized. The ailing general sent a detachment of troops out to find their supply wagons, which were much later than expected.

So of course, right after he further weakened his force, the enemy appeared. On Nov. 4, 1791. The U.S. Army found the nearly 1,000-strong American Indian warrior force at the head of the Wabash River. They had drawn St. Clair and his men into an ambush, far from its supply line and carrying captured rifles that were just as good as anything the army had brought along.

An estimated 900 U.S. soldiers were killed in the grim fighting along the Wabash as Little Turtle and his confederacy of tribes shot the men down where they stood. This is a particularly staggering number because it represented the bulk of the U.S. Army at the time. The tribesmen managed to kill half of the U.S. Army in a single day.