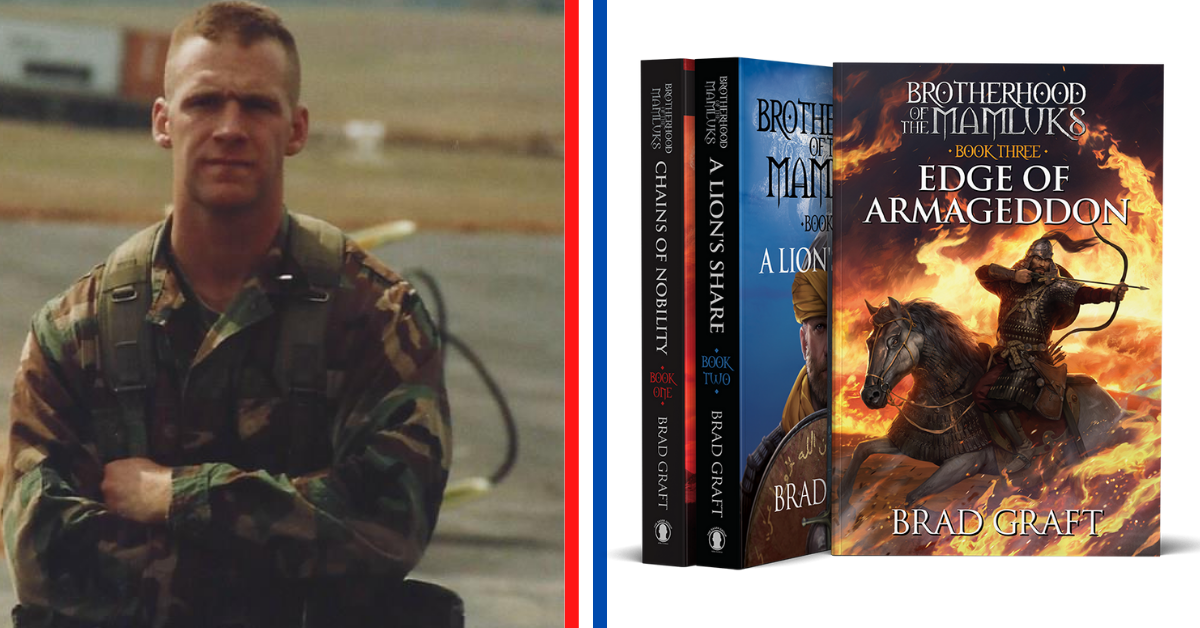 Though much has been written about the Roman Empire and its vast military conquests, the Mongols actually reign as the largest and deadliest. It would take a Marine veteran turned author to bring their history to life, woven through an extraordinary fiction book series.

Brad Graft was commissioned as a Marine in 1990 through 1994, serving through a dangerous deployment to Somalia for Operation Restore Hope, which would lead to the book and eventually blockbuster film, Black Hawk Down.

“We just did a variety of mind clearing missions and were blowing ordnance. But we also built an orphanage for a Russian educated Somali doctor,” he shared. ”There were little kids climbing all over my Marines and we built them swing sets and jungle gyms. Yeah there was a lot of ugly stuff but helping people like we did was really satisfying.”

The military wasn’t always on his radar, at first. “I was supposed to play some college football and I injured my neck,” Graft said.

His family had a small chain of minigolf courses throughout the country so football and running those was his plan before he got hurt. Instead, he joined the Navy ROTC in college and gravitated towards the small Marine Corps detachment. When he graduated, he chose to become a combat engineer.

While he was serving on active duty, Graft’s twin brother and dad had grown the business to 12 locations. After transitioning out, he was ready to go to work in the family business. But there was something missing.

“I was always reading nonfiction history books and was obsessed with things like the step-cultures of the American Indians. Someone had told me about Steven Pressfield’s work — he was a really famous historical fiction writer,” Graft explained.

At the time, he’d become enthralled with the history of the Mongols and wrote to Pressfield, imploring him to write about them. “But he turned the tables on me and told me to write it,” Graft laughed.

During its peak, the Mongols covered over nine million square miles, making it the largest contiguous empire in world history. Though Graft thought it was a crazy undertaking, he decided to write about it. But becoming an author wasn’t an easy undertaking, even for a Marine.

“It’s brutal. I think you have to be a pain merchant to stick with it,” he said jokingly.

It would take him 12 years to write the historical fiction story of the Mongols. He’d write early in the morning and late at night after working a full day for the family business.

Graft would do more than simply read research and write the stories in his head. He lived and breathed it by traveling to spend time with still present nomadic hunters in Mongolia, immersing himself in their culture.

In 2019 the first of the series, Chains of Nobility, was released. Set during the 13th century, it pulls the reader through the pages and into the unimaginable world of military slavery. Duyal, a teenager living in the Russian steppe, is captured during a Mogol invasion and forced into a deadly journey through the war-torn Middle East.

The book was awarded the Silver Medal in Historical Fiction genre by the Military Writers Society of America that same year. It was also selected as a finalist for the Colby Award and 2020 National Indie Excellence Award for Military Fiction.

A Lion’s Share was released in 2020 and garnered another Silver Medal from the Military Writers Society of America. This time readers were brought into the Seventh Crusade and its told through the Egyptian perspective.

The last and final chapter of the historical series, Edge of Armageddon, releases on January 25, 2022. Here, readers will see the main characters from the first two books brought together while introducing a female lead, Esel, to the trilogy. A bowmaker for her nomadic tribe, she is captured and enslaved by a wealthy Syrian merchant.

This is an excerpt from Graft’s website, detailing the story: A gripping tale of betrayal and love, retribution and mercy, and abandonment and redemption, Edge of Armageddon is also a compelling account of the historical Battle of Ayn Julut— an unheralded clash whose outcome leaves crucial repercussions still felt today.

Graft couldn’t explain why he was so called to the Mongols and the history of their empire. But just a year after he finished his books, he discovered a startling connection. His own family history traces back to the Volga River, where his first book takes place. “I wrote all these before I even knew I had ancestors in the area,” he said.

As for what Graft would advise other aspiring veterans out there hoping to write, it was simple. “Just do it. Learn as you go, sometimes you’ll fail and that’s okay. Just don’t stop.”

To learn more about this extraordinary Marine veteran author and his books, click here.