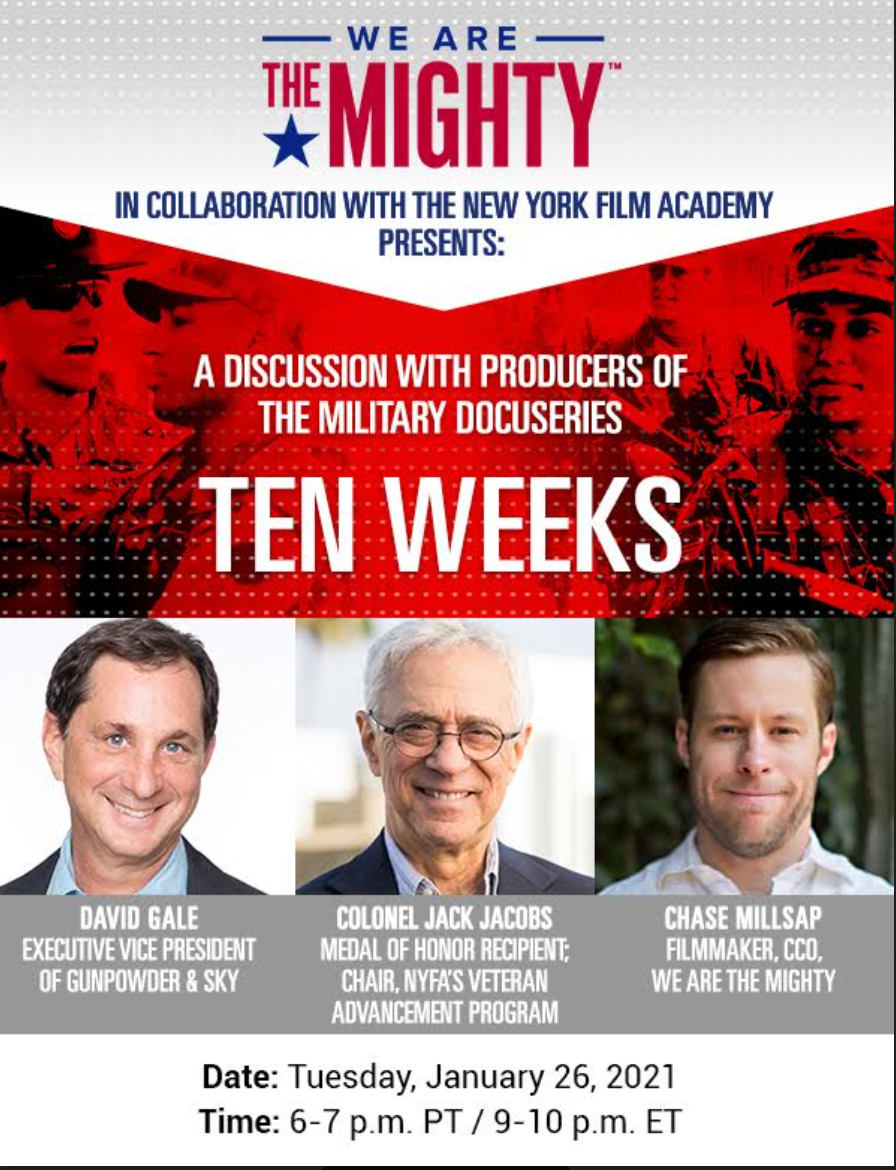 WATM’s very own Chief Content Officer and veteran Chase Millsap just wrapped up filming and producing the incredible docuseries, Ten Weeks, that takes you inside the Army’s basic combat training.

Millsap worked alongside David Gale (WATM’s founder) and retired Army Col. Jack Jacobs, Chair of NYFA’s Veterans Advancement Program a Medal of Honor Recipient, to bring viewers deep within the life of five potential soldiers during their boot camp journey. The series offers a stunning and raw look at the humanity of these everyday citizens and their extraordinary rise to becoming one of America’s protectors.

To celebrate the project, they’ll be hosted by the New York Film Academy College of Visual & Performing Arts on January 26, 2021, for a virtual event open to students, military members and veterans. The team will share an exclusive trailer and then host a live discussion on the making of the series. Leading the panel event is Tova Laiter, Director of NYFA Q&A Series. She has interviewed hundreds of Hollywood luminaries including Adam Driver, Steven Spielberg, Martin Scorcese and industry professionals at NYFA’s theaters in Los Angeles and New York City. We spoke with Eric Brown, Sr. Veterans Outreach & Recruitment Advisor, who has been instrumental in staging the January 26 panel event.

Brown enlisted at just 18 years old. With a laugh, he told WATM that his first choice had actually been the Marine Corps. His mother talked him out of it, too afraid of him being at the forefront of the war. “I served in the Navy for about seven years and deployed for efforts in Iraq and Afghanistan,” Brown shared. “I like what the Navy stood for and loved the opportunities I had as a Gas Turbine Technician.” After leaving the service in 2010, he attended the NYFA for a degree in fine arts and has been working for them over the past eight years. Working in support of this docuseries was an honor, according to Brown.

NYFA is a frequent partner with WATM and Brown shared that the school often involves their students in these types of collaborative projects. When the opportunity to showcase Ten Weeks came about, he jumped on it immediately. “Within the Division of Veteran Services, we host multiple events to connect with the veteran community,” Brown explained. Delivering good content to veterans is important to him, he said.

Another passion of his is getting more veterans involved in filmmaking. “I think there are a lot of stories out there that should be told … veterans are a very unique breed. We are civilians but we’ve transformed,” Brown shared.

When asked if watching the trailer for Ten Weeks brought back any fond memories of his own bootcamp experience, he laughed. Brown grew up in Miami and was a first generation American whose family immigrated from the Caribbean islands. Snow was not a word he was familiar with using. His basic training for the Navy took him to the Great Lakes in the middle of winter. “I caught pneumonia twice and I still had to go out there and PT. It was a pretty brutal experience,” he shared.

Although nothing as harsh as what he went through happens in the docuseries, Brown said the entire process for the prospective soldiers was completely relatable. Despite the hardship of training, he loved it. “I thought it was a very unique challenge and something I’d never be able to replicate again,” Brown said. This response is similar to what viewers will see from soldiers at the end of Ten Weeks. An incredible transformation and experience that changes them all, forever.

What does Brown hope the viewers of this docuseries take away from the project? The understanding of the weight and meaning of service. “I would like the audience to walk away with understanding the honor and commitment it takes. The integrity and courage for these service members to give up four years or 20 years or even ultimately … unfortunately those who may make the ultimate sacrifice for this country,” Brown said. “I want them to have an understanding of that and what it means, to serve. It isn’t just an incredible education. It’s about giving of yourself wholeheartedly to a cause that like-minded individuals believe in and to honor that.”

Those who watch Ten Weeks get a window view into the making of United States soldiers. The often young and bright-eyed graduates will head off to fight, for you and everyone else in this nation. They don’t do it for accolades or money, but for love. Brown’s last words are poignant and should be ingrained in every citizen of this country: “The uniform is not just an article of clothing, it’s a rite of passage and something that echoes through eternity.”

If you are a military member or veteran, sign up to take part in the virtual event to premiere the WATM-produced Ten Weeks trailer and join the discussion on the implications of service.