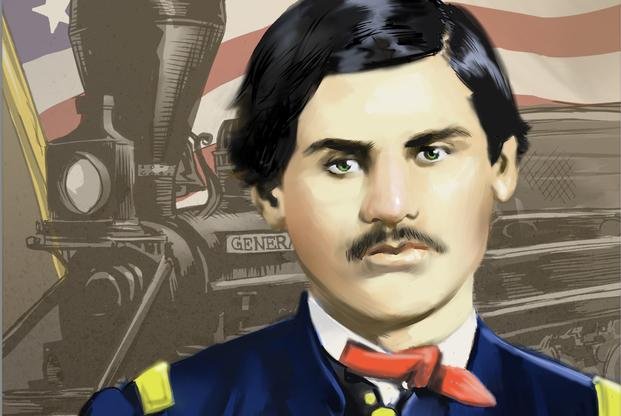 Jacob Parrott was a U.S. soldier who participated in the legendary Civil War mission popularly known as the Great Locomotive Race. His bravery as a member of the Union crew that stole a Confederate train led to recognition as the nation’s first Medal of Honor recipient.

Now, Parrott’s story is told in “Medal of Honor: Jacob Parrott,” the latest issue of the Association of the United States Army’s graphic novel series. You can view or download a free copy at www.ausa.org/parrott.Advertisement

Prior to the Civil War, the democratic peoples of the United States resisted the very idea of military medals. Americans connected a chest covered in fruit salad with the kind of European traditions the new nation was designed to eliminate.

Give the credit to Lt. Col. Edward D. Townsend for first suggesting a medal of honor to his boss Commanding General of the U.S. Army Winfield Scott in 1861. Scott resisted, but the idea took hold. After Secretary of Navy Gideon Welles supported legislation for a Navy version, the Army got on board with the concept and Congress passed legislation that created the award.

The April 1862 mission, led by civilian spy James Andrews, was designed to cut off Confederate supply lines by destroying rail tracks and telegraph communications along a route between Marietta, Georgia and Chattanooga, Tennessee. Andrews’ raiders boarded a train in Marietta and hijacked it when passengers got off for breakfast at the first stop heading north.Advertisement

If Confederate troops holding Chattanooga could not be resupplied from the South, Union generals believed they could take the city and speed up the South’s defeat, ending the war at least two years before the actual surrender at Appomattox.

Confederate soldiers chased the train. Andrews’ men had to switch trains over the course of the journey and their replacement train ran out of water and fuel before they could complete their mission. The men scattered and Andrews was executed by Confederates for leading the mission. Parrott was captured and flogged before imprisonment. He was later returned to the Union Army in a prisoner exchange.

The story has been told on film before. Disney made “The Great Locomotive Chase,” a 1956 movie starring Fess Parker as James Andrews. Parker was at the height of his Davy Crockett fame. Claude Jarman Jr., best known as Jody in “The Yearling,” played Jacob Parrott in his final movie role before ending his on-screen career to join the U.S. Navy.

The movie tries to appeal to all audiences. The Confederates are honorable men who have a mission and so are the Union spies. Parker even tries to shake hands with his Confederate nemesis William Fuller (played by Jeffrey Hunter) before he goes to the gallows. There are opponents but no one’s really the villain.

Jacob Parrott was one of six Army volunteers who received a medal of honor on March 25, 1863. Because he’d been physically abused in a Confederate prisoner of war camp, Parrott was the first man to receive his medal in recognition of his sacrifice. He was joined that day by Sgt. Elihu H. Mason, Cpl. William Pittinger, Cpl. William H. H. Reddick, Pvt. William Bensinger and Pvt. Robert Buffum.

AUSA will be publishing three more Medal of Honor graphic novels this year, featuring Mitchell Red Cloud Jr., a Native American soldier who sacrificed his life in Korea, Wild Bill Donovan, the WWI hero who later founded the OSS, and Roger Donlon, the first recipient from the Vietnam War and the first Special Forces recipient.