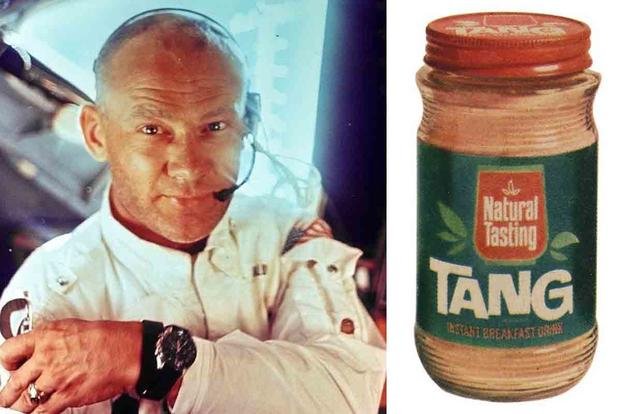 Tang, the orange-flavored drink mix that intrepid American astronauts took into space, wasn’t selling so well until it famously went into orbit. And there’s at least one astronaut who wishes it never left the ground.

Edwin “Buzz” Aldrin, the second person to step foot on the moon, told the audience of the 2013 Spike TV Guys Choice awards that “Tang sucks.”

For those unfamiliar with Tang, it’s the orange-flavored breakfast drink that has somehow managed to stick around grocery store shelves for the past 60-plus years, as if there wasn’t already an orange beverage closely associated with mornings. Except the only thing Tang has in common with oranges is its color.

Aldrin, the famous West Point graduate and Air Force astronaut, was not only the second man on the moon, he was a combat pilot in the Korean War. After notching two MiG kills in 66 combat missions, he earned a doctorate from the Massachusetts Institute of Technology and joined NASA. So if Buzz Aldrin says Tang sucks, he’s probably right.

Much of the Twitterverse agreed with him. An informal poll conducted by NPR following his controversial statement found that more than 57.1% of respondents agreed. Another 29.43% disagreed and 13.47% didn’t know what Tang is — and their lives are better off for it.

If you disagree with Aldrin, that’s fine. Just keep in mind that old-school astronauts don’t take guff from laymen. The one time someone tried getting into his face about how the moon landing was faked ended with Aldrin punching that person in the face.

Because NASA took this orange-like beverage on space flights, sales of the drink took off, too. It was so closely linked with the United States’ space program that people came to believe NASA developed the powdered beverage especially for astronauts. That built-in marketing gave it the lift it needed to stay on shelves ever since.

For this American hero’s sake, let’s be clear about Tang. If orange-scented furniture polish tasted exactly how it smelled, it would taste like Tang. The closest Tang powder ever gets to an orange is the picture of an orange on the label. Although it provides 100% of the recommended daily allowance of Vitamin C, that’s about all the benefit you’ll get from it.

Tang also contains two artificial yellow dyes, Yellow 5 and Yellow 6, which studies by the Center for Science in the Public Interest say can cause allergic reactions, contain possible carcinogens and may cause hyperactivity in children. It also contains BHA, which the label says is used to “protect flavor,” as if that was something we wanted. Meanwhile, the National Institutes of Health says BHA “reasonably anticipated to be a human carcinogen.“

For real food, NASA created dehydrated edibles for the astronauts to consume while in space, including scrambled eggs, curried chicken and raisin rice pudding, all packed in sealed plastic bags.