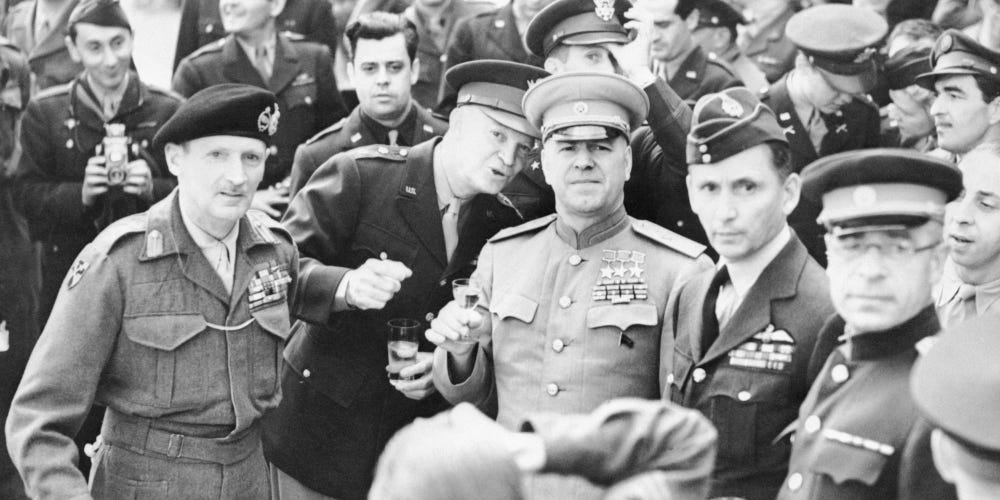 As World War II ended and the Iron Curtain fell over Eastern Europe, relations deteriorated between the Soviet Union and its Western allies.

The Soviet repudiation of the West and of capitalism went as far as banning business with Western companies, as there was no reason to trade with “imperialist” powers.

That created a problem for one of the most revered Soviet military leaders, marshal of the Soviet Union Georgy Zhukov, who oversaw many of the USSR’s greatest victories against the Nazis.

The problem? Zhukov had developed an intense liking for Coca-Cola, a drink now illegal in the Soviet Union. Not only that, but Zhukov also feared that being seen consuming such a recognizable Western product would lead to punishment.

In an effort to maintain good ties, the Truman administration undertook a covert effort to get Zhukov the soda he wanted.

As the US entered the war, Coca-Cola President Robert Woodruff ordered his company “to see that every man in uniform gets a bottle of Coca-Cola for 5 cents, wherever he is and whatever it costs the Company.”

The soft drink was seen as an important morale booster and thus a wartime necessity. Coca-Cola bottling plants sprang up close to front lines all over the world to get the drinks to Allied troops as fast as possible.

More than 100 employees known as “Coca-Cola colonels” were even given the Army rank of technical observer and deployed to the front to ensure soldiers got their Cokes quickly and efficiently.

In 1943, Gen. Dwight Eisenhower, a fan of the drink himself, ordered 3 million bottles to the front in North Africa. He also requested enough supplies and materials to refill 6 million more bottles every month.

When Richard Bong, a US Army pilot in the Pacific theater, set the American record for air-to-air-combat victories in January 1944, Gen. Henry “Hap” Arnold, the head of the Army Air Forces, sent him two cases of Coke as a reward.

By the end of the war, Allied military personnel had consumed 5 billion bottles of Coke from 64 bottling plants around the world.

Zhukov acquired his taste for Coke after drinking it during a meeting with Eisenhower after the war. Zhukov could enjoy Coke in meetings with Western officials but not at home, as the Soviet Union had banned Coca-Cola outright.

No alternative sated Zhukov’s thirst for Coke, but in 1946, he had an idea: If the drink were delivered without its distinctive caramel color, it could possibly be passed off as vodka.

Zhukov asked his American counterparts to see if such a feat was possible. Gen. Mark W. Clark, commander of US forces in the American sector of Allied-occupied Austria, eventually passed the request to President Harry Truman, who contacted James Farley, chairman of the Coca-Cola Export Corporation.

Coca-Cola was actually in the process of expanding its business operations in Austria, and one of its employees was assigned to the effort. A company chemist soon made a clear version of the drink by removing caramel from the ingredients.

At Zhukov’s request, the new beverage wasn’t put in the usual Coke bottles but instead in unmarked, straight-edged bottles. To create a communist-friendly appearance, Coca-Cola even used custom-made white caps emblazoned with a red star on the bottles.

Fifty crates of “white Coke” were delivered to the Soviets in Vienna. While all other goods entering the Soviet occupation zone were stopped and inspected, Coca-Cola was able to deliver the crates without interference.

In the end, the rare olive branch between East and West amounted to little more than a personal favor between wartime colleagues.

It’s not known what became of the drinks or their bottles, and the exchange had no effect on the deteriorating relationship between the two blocs.

It didn’t even earn Coca-Cola better treatment, either. Its rival Pepsi eventually gained a virtual monopoly in the Soviet Union, which the Soviets maintained — once trading several warships for $3 billion worth of Pepsi — until 1985.