This veteran Navy SEAL just did a 5 mile ruck underwater 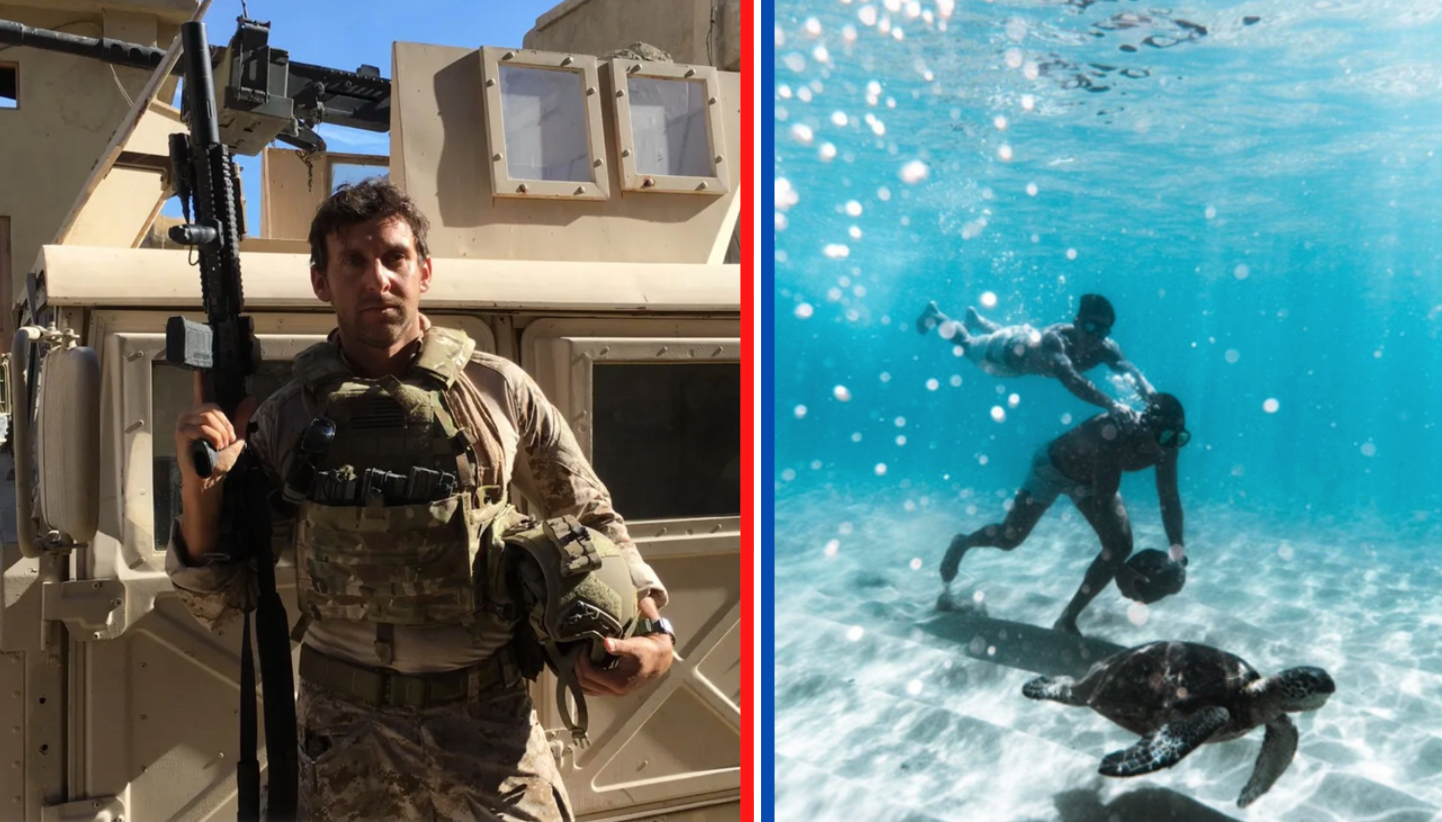 Combat veteran and Navy SEAL Kaj Larsen was born to be in the ocean, but these days he doesn’t blow things up underwater anymore. He’s saving it all instead.

Larsen grew up in Santa Cruz, California, where his mother taught at the university. Surrounded by “watermen,” the ocean was always home, he said. In 1995, he brought his aquatic abilities to the water polo team at the Naval Academy, committed to following a long, family tradition of military service.

“My grandfather served in the Navy during World War II and my father was a Marine during Vietnam so I thought it was important that I serve too. Because I came from this really aquatic background, the SEAL Team was a natural fit for me,” he explained.

Larsen transferred to the University of California in 1997 and then commissioned through Officer Candidate School (first in his class) in April of 2001. Not long after, our nation was at war. He was in the first phase of BUD/S class when America was attacked on 9/11. After graduation, he led teams into covert combat operations in the War on Terror for multiple deployments. In 2007, he transitioned from active duty after five years into the reserves.

Larsen left the Navy reserves in 2018 as a Lieutenant Commander.

After his active-duty military service, Larsen attended graduate school at Harvard for public policy and counter-terrorism studies. He very quickly became a familiar face on CNN, ABC or MSNBC where he reported from war zones across the world.

And, he volunteered to be water-boarded on live television.

You could also find him hosting VICE on HBO, where he produced documentaries on conflict and national security. Larsen was the only embedded journalist during the Nigerian fight against Boko Haram. The SEAL became an award-winning documentarian, journalist and producer.

His passion for national security and the military community merged his love of the ocean when he joined Force Blue Team as a veteran ambassador.

“Force Blue takes former special operations veterans and repurposes those underwater military skills for ocean conservation,” Larsen shared. “We have this dual mission of both healing the ocean and in doing so we can help heal veterans from our time in service. I really believe in the therapeutic and healing power of the ocean.”

You’ll find combat veterans just like him on the ocean floor planting coral, rescuing turtles, completing vital fish counts and conducting oceanic surveys. “It’s like my life has come full circle. Underwater demolition used to be my job and now I’m replanting coral reefs and watching them come back to life,” Larsen said.

In 2021, Larsen teamed up with veteran Marine Raider Don Tran for what was supposed to be a one-mile underwater ruck run when Ten Thousand challenged them to a feat of strength. The challenge was definitely accepted.

“We started training in the pool where it was definitely tough and challenging. But we accomplished it and like any two spec ops guys standing next to each other, we decided to ratchet up the intensity a little,” Larsen said with a laugh.

That “just a little” turned into a never-been-done-before five-mile underwater ruck. Using the freediving buddy system of one up and one down, the former special warfare operatives leapfrogged across the living ocean floor for five miles, all while carrying a 45-pound rock.

“The first 250 yards was brutal. It was not like the training in the pool. Here we had the ocean and current pushing us around. But like any marathon or mission we put one foot in front of the other and just grinded it out,” Larsen said.

Grind it out they did. It took them six hours and 28 minutes. The entire extraordinary event will be shown to the world in a documentary coming soon.

For this veteran Navy SEAL who relied on the ocean for so much, taking care of it is a mission he’s happy to accept.  “I know the beauty and wonder of the sea. I also see with my own eyes the terrible impact happening to our ocean,” Larsen said. “I am dedicated, along with my brothers from Force Blue, to helping heal that thing which has done so much to help heal me.”

You can learn more about Kaj Larsen by clicking here and then dive (pun intended) into Force Blue’s mission over here.