Today in military history: Charge of the Light Brigade - We Are The Mighty

Today in military history: Charge of the Light Brigade 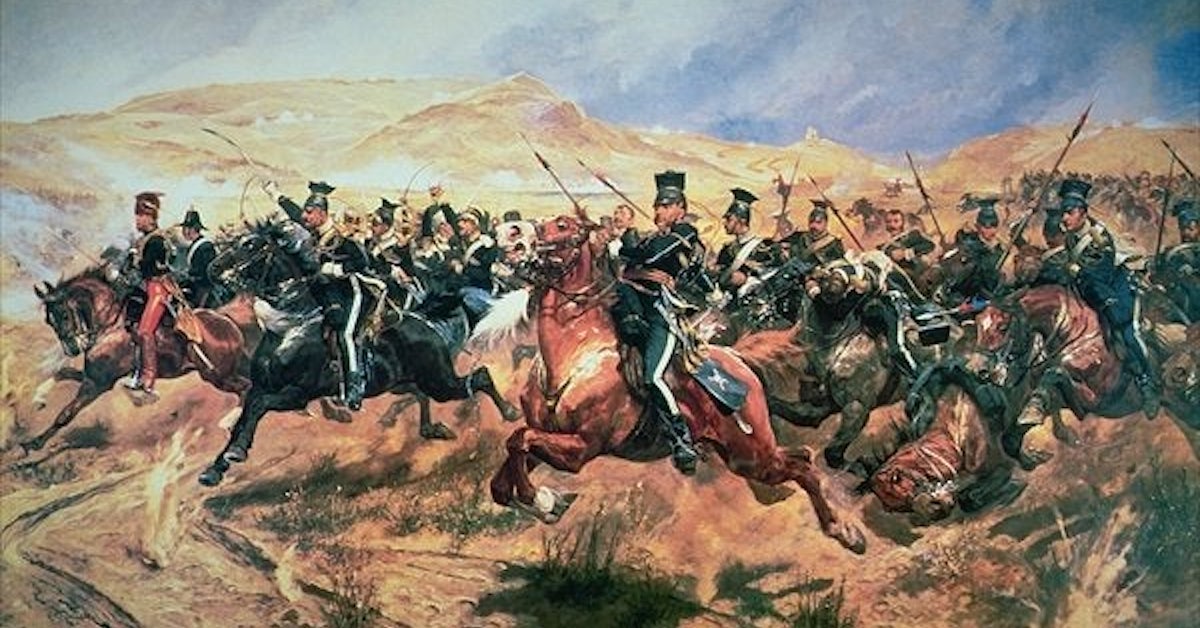 The “Charge of the Light Brigade” has become shorthand for a military disaster, especially one that is filled with heroics but is still a catastrophe. In the actual Charge of the Light Brigade, approximately 670 men rode into the teeth of Russian artillery because their officers didn’t understand their orders and didn’t want to talk to one another.

In what was later revealed to be a gross misunderstanding, Cardigan received an order to attack the Russians.

Lord Raglan wishes the cavalry to advance rapidly to the front – follow the enemy and try to prevent the enemy carrying away the guns. Troop Horse Artillery may accompany. French cavalry is on your left. R Airey. Immediate.

This would have been a valuable use of cavalry in what was an accepted practice at the time. Cavalry riding against artillery would have been able to close the gap between themselves and the enemy guns quickly, giving the enemy just enough time for one or two shots from the cannons. Once the cavalry reached the guns, they could have cut the gun crews to ribbons with their sabers.

Even better for the British, these were Russian cavalrymen retreating with Turkish guns. Chances are, they wouldn’t have attempted to fire the cannons at all, abandoning them or dying in their attempt to remove them.

But, Lord Raglan worded his orders with the assumption that Cardigan knew the Turkish cannons were being carried away. From their positions on the valley floor, neither Cardigan nor Lucan could see the former Turkish positions. When the order to attack came, they didn’t know what Russian guns they were being told to attack.

This is where a quick conference between the commanders or clearly written orders would have saved everything. But Raglan and Airey provided unclear orders and the courier who carried the orders may have indicated the wrong target for attack. Cardigan and Lucan, the two cavalry commanders, hated each other. (Cardigan had married Lucan’s sister but the couple later separated, embarrassing Lucan.)

So, Lucan simply passed the order to Cardigan and the cavalry mounted for an attack.

Though the advance was futile, about 500 cavalrymen of the Light Brigade galloped straight through the Russian guns and the whole body of two-thousand strong Russian cavalry.

Cardigan survived the attack, but his forces were decimated, suffering forty percent casualties. He was nonetheless hailed as a hero throughout England and the bravery of the attack has been remembered ever since.

Fun fact: The cardigan sweater was named for Lord Cardigan and modeled after the garment worn by his forces to keep warm.