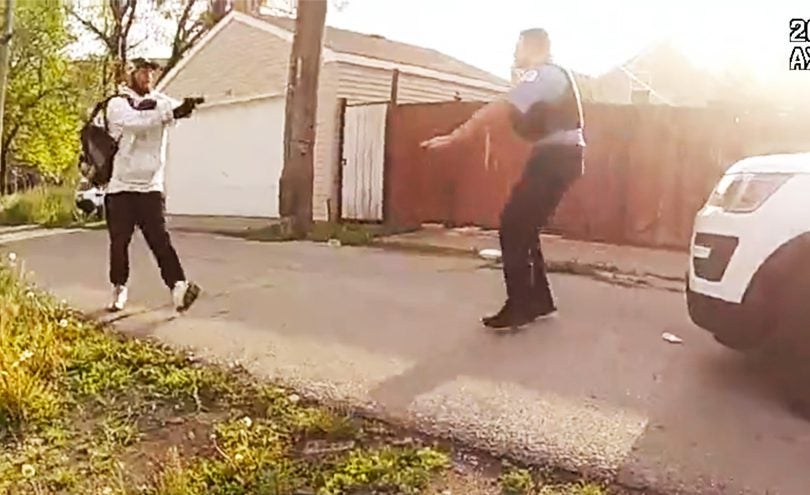 It all happens in 6 seconds.

Two police officers jump from their car as a man is walking — slowly, almost casually — toward them in an alley. The cops yells at him to stop.

In a flash almost too quick to see, a gun appears. Everything is point-blank. A spray of shots ring out.

Both officers — Julio Garcia, 28, and Mark Nakayama, 25 — are hit. As one cop falls, he returns fire and hits the shooter.

This officer body camera video includes graphic images of two shootings including the shooting of a police officer and bullet wound injuries.

The Chicago Civilian Office of Police Accountability (COPA) released gripping body-worn camera footage Wednesday showing an early morning shooting in an alleyway on May 16, 2021. The footage shows just how quickly police have to make split-second decisions in lethal situations.

Two calls to 911 had reported a man firing shots, and a police-run listening system had located the sound of gunfire in Chicago’s West Douglas Boulevard, about 5 miles west of downtown. Within minutes, officers found a man matching caller descriptions in a nearby alleyway. As two officers followed the man, identified as 45-year-old Bruce Lua, on foot, Garcia and Nakayama pull into the alley ahead of him, cutting him off and leaving him surrounded.

Garcia and Lua are a few feet apart as they fire at each other, almost simultaneously. One frame from Garcia’s camera appears to capture the exact moment that he both fires his weapon and is hit by Lua’s shot. In the frame, a brass casing is ejecting from Garcia’s weapon as he fires, but his hand appears to be deflected by Lua’s bullet.

Following the shooting, Garcia can be seen with blood dripping down his right arm and hand. He then almost immediately switches his weapon from his right hand to his left, covering Lua.

Nakayama — who on his body camera footage can be heard telling other officers he is shot in the leg — falls but appears to fire at least one shot that strikes Lua, causing him to fall as well.

Garcia covers Lua until other officers arrive who disarm and cuff Lua and begin to treat Nakayama.

At one point, a fellow officer can be heard yelling, “Where the f*ck is that ambulance?”

Both officers and Lua were transported to the hospital and released. The CPD Case Incident Report lists the officers’ injuries as “serious,” with Garcia shot once and Nakayama shot twice. Lua is being held on $10 million bail and charged with two counts of attempted murder.