'We lost everything': As Kabul falls and more US troops rush to aid the evacuation, time runs out for Afghan interpreters - We Are The Mighty

‘We lost everything’: As Kabul falls and more US troops rush to aid the evacuation, time runs out for Afghan interpreters 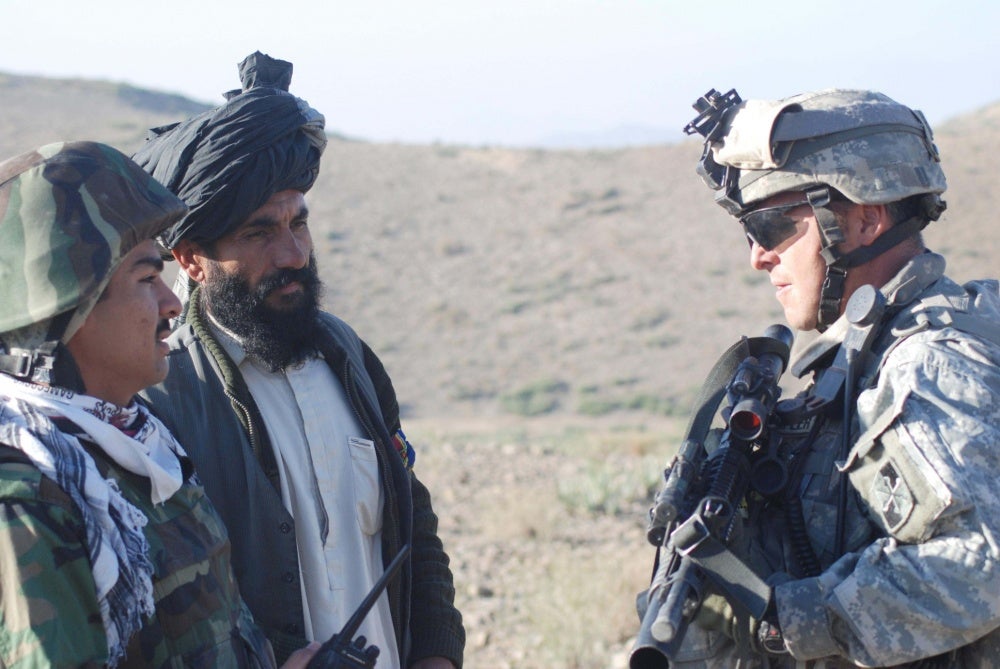 Office of the Secretary of Defense Public Affairs.

As the Taliban entered Kabul and the Afghan government dissolved on Sunday, one of the thousands of Afghans who served the United States as an interpreter — and has since waited more than a decade for his visa to be approved — watched the scene in despair.

“I can’t even talk right now,” the interpreter, who asked to be identified only as Said, said in an interview Sunday. “I’m just about to cry, because we lost everything.”Advertisement

He watched over the years as the U.S. and NATO allies tried to support the Afghan government and spent vast sums of money to do so.

Read Next: Biden Sending an Extra 1,000 Troops to Afghanistan as Taliban Forces Close in on Capital

“But, unfortunately, the Taliban can destroy everything in just the blink of an eye,” he said, referring to the deposed government in Kabul.Advertisement

As Kabul fell without a shot and the nearly 20-year Afghanistan campaign unraveled, the United States scrambled to shore up its hasty evacuation of personnel from the capital. A Defense official confirmed Sunday that the Pentagon was sending another battalion of 1,000 troops into Afghanistan — on top of the 1,000 announced Saturday – from the infantry brigade combat team that was slated to be deployed to Kuwait to bolster security at Hamid Karzai International Airport in Kabul.

Those troops are from the 82nd Airborne Division at Fort Bragg, North Carolina. The Defense official said that the battalions announced Saturday and Sunday will go straight from Bragg to Afghanistan, and that a third battalion is still headed to Kuwait in reserve.

This weekend’s deployments bring the number of U.S. troops in Afghanistan to about 6,000 including the roughly 1,000 service members already in Kabul, plus an added force of 3,000 soldiers and Marines who were announced Thursday.

Said, the interpreter who had worked with U.S. government groups, briefly left his home in downtown Kabul earlier Sunday and saw Taliban fighters patrolling the streets in their signature white robes and black turbans. The Taliban were driving Ford and Toyota pickup trucks they had captured from Afghan police and the National Directorate of Security, the deposed Afghan government’s intelligence and security service, he said.

He’s still trying to find a last-ditch way to get a visa and make it to the U.S. But even if that works and he were called to go to the airport, he’s not sure how he would manage it. He said he surely would have to bring documents proving he worked for the U.S.; if he were stopped at a Taliban checkpoint along the way and searched, those papers would seal his fate.

And even reaching the airport may not be a guarantee of safety. The U.S. embassy in Kabul on Sunday issued a security alert advising U.S. citizens at the airport to shelter in place, and said there were reports the airport, the last citadel of American power during the exodus, was taking fire.

Some Kabul citizens came out to high-five the Taliban, Said said, and they offered a friendly greeting of “Salaam” to one another. There were no Afghan military personnel to be seen.

For years, activists and others have sounded alarms about the need to evacuate Afghans who worked for the U.S. in interpreter, driver and other jobs, and about the dismal failings of the highly bureaucratic and understaffed Special Immigrant Visa, or SIV, process. Those advocates often called for relocating the Afghans — at one point estimated to be about 18,000, plus their family members — to locations outside of Afghanistan, such as Guam.

Those calls had become increasingly desperate since April, when the Biden administration announced plans to completely withdraw the U.S. military later in the year. Last month, the administration said it would start moving the first group of Afghans — about 2,500 in all, including 700 who were SIV applicants whose cases were far along — to Fort Lee in Virginia.

The Defense official stressed Sunday that part of the mission of the new wave of troops being sent to Afghanistan is to help the State Department accelerate the processing of SIV applicants.

SpyTalk reported Sunday that the State Department’s SIV application system had a glitch that limited how many emails it could receive, and had become overwhelmed by the volume of applications from desperate Afghans in the last few days. State told SpyTalk that it has fixed the glitch.

But though Said knows friends who have scheduled flights upcoming, flights that may well be disrupted by the rapid victory of the Taliban that has placed the airport within their sights, he still has heard nothing from the U.S. Embassy.

He fears for his and his family’s safety.

“I think this is the beginning,” he said. “When they settle up, they will start looking at people who helped [the United States].”

When asked whether he feels betrayed by the United States, he said, “Of course.” He points to a stack of ceremonial coins he received from officials, and recommendation letters from doctors and officers who knew him and vouched for him during his six-year stint as an interpreter at the hospital at Bagram Airfield — now in the hands of the Taliban — as evidence of his reliability and proof that his visa should be approved.

In an interview in July, Said said he has tried unsuccessfully to obtain a visa for more than 12 years. He believes at least part of the problem is due to a clerical error.

He’s perplexed that his life is in danger because of the paperwork issue, which he claims mistakenly lists his departure from American service as a firing for poor performance. He said he was laid off because there weren’t enough positions for him, and that he was a hard worker — a characterization backed up by his former supervisor who spoke to Military.com last month.

Had the U.S. outright rejected his second visa application earlier, he said, instead of letting it hang on for years, he might have taken his family to another country. But now, it’s too late, and he doesn’t have enough money to relocate.

He said family members came by to see him Saturday night and were concerned that he still had bundles of recommendation letters and certificates.

“They said either grave it, or burn it,” he said. “Because it’s useless now, and will threaten your life.”