Why cops love doughnuts - an origin story - We Are The Mighty 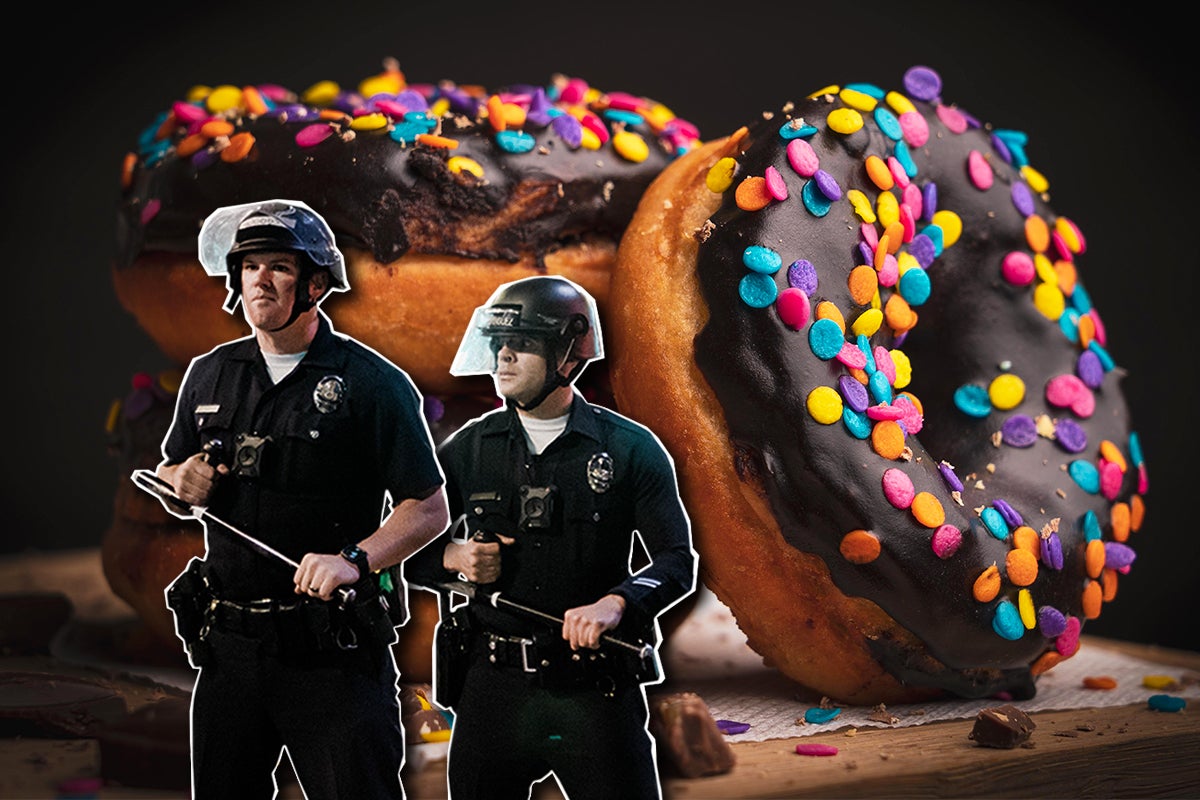 Cops love doughnuts. That’s the stereotype at least. Being caught in uniform with one of the delicious but unhealthy confections has long carried a certain stigma, but the real history behind the close relationship cops have with doughnuts is much more interesting and complex than the negative caricatures often put forth in American media.

In some places, the cop-doughnut relationship was symbiotic. In others, it was necessary. But the reason cops and doughnuts are like peas and carrots in our collective cultural memory is because the doughnut shop was the only game in town.

Cops have a lot to do during their shifts, no matter how long those shifts might be. When not actively responding to calls, patrolling their areas of responsibility, or doing the myriad things cops have to do during a typical 10-hour shift, police officers have to find a place to do the bulk of police work: writing reports.

To outsiders, police work has always been about walking the beat — the daily business of protecting and serving. For actual police officers, writing reports is a duty as old as walking any beat. And back in the day, cops didn’t have a lot of options for where they could post up and get some paperwork done.

Even by the late 1970s, the idea of a 24-hour convenience store seemed insane to most people. Gas stations didn’t always have stores and weren’t as ubiquitous as they are today. They also closed at a decent hour. The same goes for grocery stores. Outside of major cities, all-night diners were rare, and even in the 1960s, only 10% of restaurants were open all night, catering mainly to truckers.

If a police officer’s beat wasn’t near one of these small handfuls of all-night spots, they were out of luck. But there was one place a tired, hungry peace officer could go to grab a cup of coffee, some food, and maybe get some work done — the good ol’ doughnut shop.

What was good for the police was also good for the doughnut shop. Being open late in small cities and towns meant they were a target for criminals looking for an easy payday. Having the local police force using your doughnut shop as a staging area meant built-in security as you got up in the early morning hours to make doughnuts.

The symbiotic relationship spread all over the country, even as more and more establishments began to stay open late. When the interstate highway system ramped up construction in the 1960s and 1970s, the country became more connected, and some rural areas became significantly less rural.

Doughnut shops even became late-night chains such as Krispy Kreme and Dunkin’ Donuts. The cop-doughnut relationship held fast, and some stores set aside space for police officers to get their work done. Dunkin’ Donuts even had a companywide policy of catering to police. Its founder, William Rosenberg, credited the relationship with the company’s early success in his autobiography.

A doughnut is a decent snack for a graveyard shift. It’s a fresh, easily obtained source of calories that a busy officer might need for a night of busting punks. When the action dies down, coffee offers a burst of caffeinated energy to help cops get through their shifts. And coffee and doughnuts are relatively cheap, which is great for anyone working as a city or state employee.

Despite the rotund appearance of police Chief Clancy Wiggum on The Simpsons, doughnuts aren’t to blame for the image of the overweight cop. In The Donut: History, Recipes, and Lore from Boston to Berlin, author Michael Krondl interviews police officers who recall their sweet treats giving them just the right amount of food needed to do the job.

“You got out there, walked around, rolled in the streets with criminals [and burned] the calories off,” Frank Rizzo, former Philadelphia police chief, told Krondl.

Somewhere along the way, American popular culture began to notice, and the image of the local police officer began to shift into a caricature, fueled by the cop-doughnut relationship. Cops in film and television became less Andy Griffith and more Chief Wiggum.

What started with a wholesome beginning eventually became derogatory. Everyone from stand-up comics to punk bands and rappers began to make fun of the cop-doughnut dynamic. For some, there’s nothing worse than being caught with one of those sweet fried treats or being seen parked at a Krispy Kreme.

Today, cops can generally post up anywhere to catch up on paperwork. Police cruisers have come a long way and have everything an officer needs during a shift. If they need a meal or a break, there are often many options open to them.

But doughnuts and coffee still provide excellent fuel for the thin blue line, and late-night and early morning bakers appreciate the added security of having cops around. So the next time you see a cruiser parked at Dunkin’, cut your local police force a break and don’t cast shade. If you were in that uniform, you might be right there with them.

Feature image: Composite by Coffee or Die Magazine/Images from Unsplash.