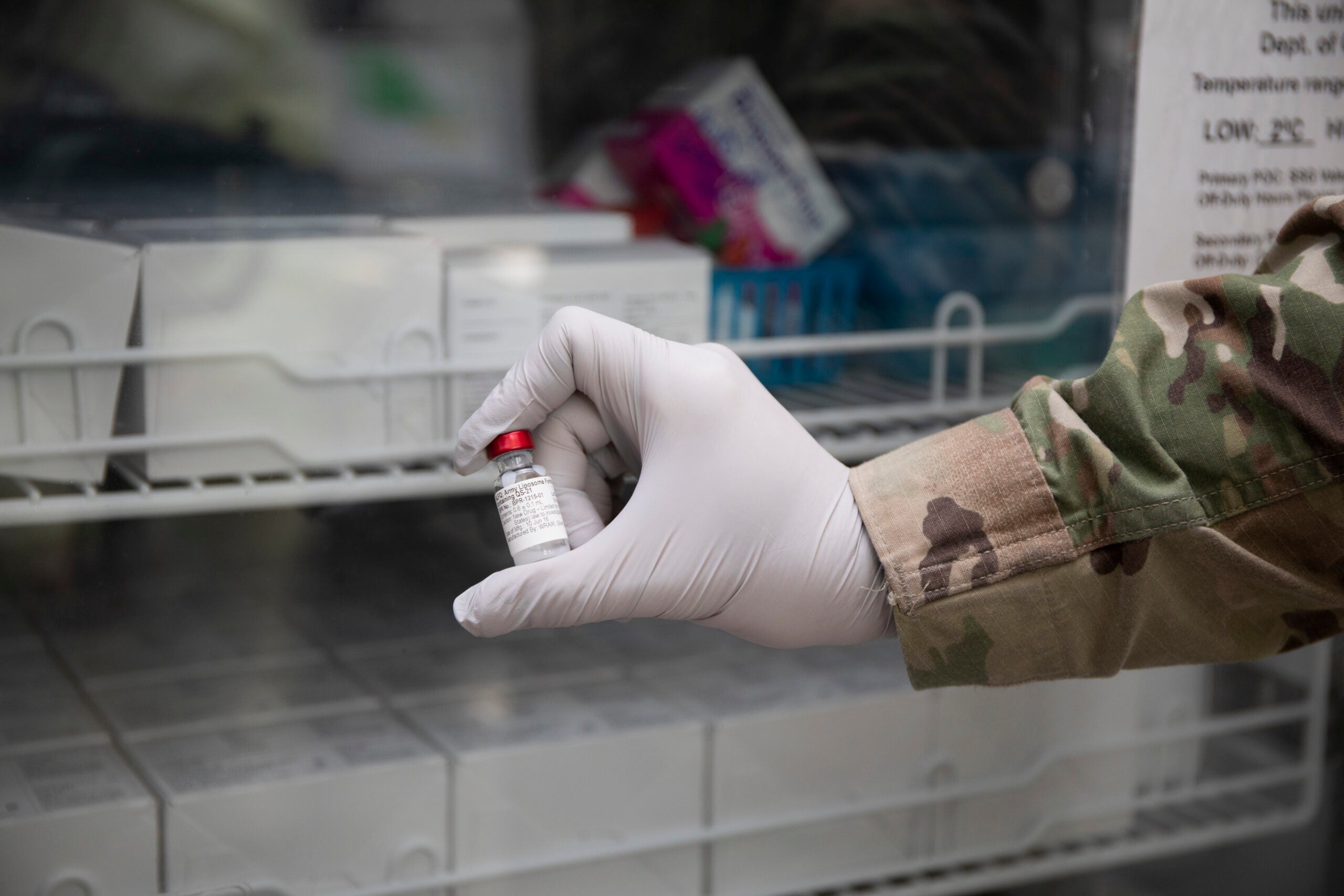 A vial of Army liposome formulation Q (ALF Q) is stored during the start of phase I clinical trials for WRAIR's COVID-19 vaccine, spike ferritin nanoparticle (SpFN) vaccine. ALF Q is an adjuvant, or compound used to boost the immune response, that is co-administered with SpFN.

The Walter Reed Army Institute of Research (WRAIR) is neck deep in the battle against COVID-19 by developing their own vaccine. In typical American military fashion, these soldiers hope to create the best and most effective weapon against the virus.

As of April 7, 2021, almost 20% of the United States has been vaccinated against the COVID-19 virus. Despite there being three available options for vaccines circulating throughout the country and availability of vaccines opening up to the public at large, the Army is looking ahead. It’s something they’ve been doing for a long time.

For over 100 years the Army has been studying viruses and working on vaccinations. Their roots go all the way back to 1893 as the scientists within WRAIR continually dedicated themselves to soldier readiness and preventing death. “When we send soldiers around the world, they not only face the threat of the enemy, they face the threat of diseases that we don’t have here in the United States,” Col. Deydre Teyhen, commander of WRAIR, said in an interview with ABC News. “And so our job at the Walter Reed Army Institute of Research is to create ways to prevent that and protect them.”

The Army’s far-reaching contributions to the scientific community have been revolutionary throughout history and they hope to do it again against COVID-19. Since the pandemic began, they’ve been quietly working on a vaccination against the virus wreaking havoc on the world. Their animal trials have progressed to humans and hopes are high. Retired Army Col. Francis Holinaty stepped forward and volunteered to be the first human test subject.

“Amazingly, in that growing landscape of vaccines, our approach is unique,” Dr. Kayvon Modjarrad, the director for emerging infectious diseases at WRAIR said in an interview with ABC News. “It presents that part of the virus, the spike protein that’s the hook that gets attached to your lung cells, a lot of vaccines just present one of those to the immune system. Our approach presents them multiple times.”

From there, the antibodies should provoke a response to the protein spike it’s presented with. The vaccine being developed by WRAIR also skips some of the steps seen in the other vaccines by bringing the protein spike and immune boosting components together for the recipient. The results in animals have shown it to be very promising according to Modjarrad in his interview, even against the highly contagious variants currently causing a new wave of infections.

Another factor that makes it stand out is its durability, if it’s successful in humans. The current model of their vaccine doesn’t require freezing and could make its way safely on an Amazon truck without fear of the vaccine being ruined.

The uniqueness of their approach is that it aims to target not just the COVID-19 virus and the variants, but all Coronaviruses. As a team, WRAIR recognizes that the world needs to think ahead to the next Coronavirus, because science has shown that there will be more. By doing the work they’re doing, these soldiers are ensuring the United States will be ready and able to respond.