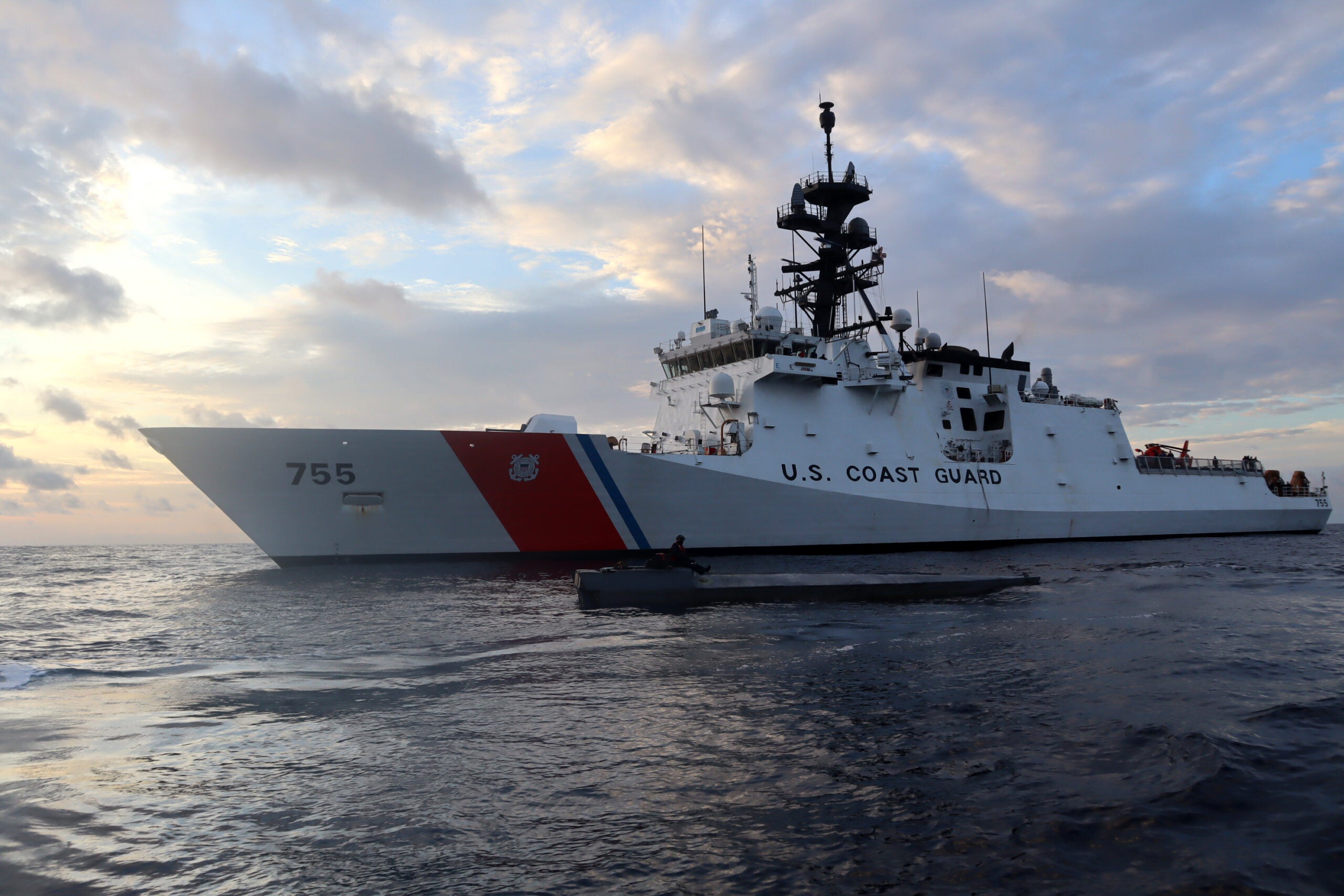 Coast Guard Cutter Munro (WMSL 755) boarding team member sits atop an interdicted low-profile vessel in the Eastern Pacific Ocean after crews seized 3,439 pounds of cocaine from the LPV, Jan. 27, 2021. Munro is one of two Alameda, California-based cutters who's crews interdicted a combined three suspected drug smuggling vessels in the Eastern Pacific Ocean between Jan. 26 and Feb. 1 resulting in the seizure of more than 9,000 pounds of cocaine worth an estimated $156 million. U.S. Coast Guard photo courtesy of the Coast Guard Cutter Munro.

The Coast Guard Cutters Munro and Bertholf out of Alameda, California seized over $156 million worth of cocaine from January 26 through February 1, 2021.

The Coast Guard is the first line of defense against cartels and narcotics. On January 26, 2020, the crew of the Munro boarded a fishing vessel that was suspected of carrying narcotics. After creating a bilateral agreement with a partnering nation, they seized over 1,300 pounds of cocaine that had been concealed. Only a few hours later, a maritime patrol aircraft spotted another one.

The Munro launched their helicopter crew and boarding team to intercept the potential drug smugglers. Working in tandem, they were able to stop what was called a low-profile vessel. It is a boat that cartels are specifically designing to evade detection, by riding low in the water but able to carry large amounts of illicit drugs and contraband. The Munro crew caught them and discovered the vessel was carrying 3,439 pounds of cocaine.

“Having back-to-back cases lasting 31 hours pushed our limits, but our crew took on the challenge,” said Capt. Blake Novak, Commanding Officer of the Munro said in a  press release. “Cartels are cunning and sophisticated, and this is a dynamic environment, which required interagency and international coordination which yielded results. I am proud of our crew, but these successes would not be possible without our Central and South American partnerships.”

On February 1 the crew of the Bertholf intercepted a suspected smuggling vessel on the pacific. They seized over 4,380 pounds of cocaine.

“The crew continues to impress me as they rise above challenges, stand a taut watch, and conduct themselves in a professional manner as we go about our business of stemming the flow of narcotics in the Eastern Pacific,” said Capt. Brian Anderson, Commanding Officer of the Bertholf in a press release. “I could not be more pleased with the overall teamwork between the aircraft, our small boats, and my crew in the interdiction of this drug laden vessel. Together we are making a difference.”

With the three separate seizures, nine drug smugglers were taken into custody.

Both cutters are 418-foot National Security cutters which are able to operate globally in a variety of missions. The largest and most sophisticated of Coast Guard cutters, they boast crews of 150 or more. Counter narcotic operations are conducted with the Navy, Customs and Border Protection, FBI, DEA, ICE and international partnerships. The law enforcement operations are led under the command of the 11th District of the Coast Guard.

The Coast Guard is the only military branch with the power to make arrests, because they are under the Department of Homeland Security. They also don’t need reasonable cause to stop any vessels under United States jurisdiction. This is why you will find coasties aboard many U.S. Navy ships.

Each year, the Coast Guard accounts for over half of all U.S. government drug seizures. In 2019, they removed 207.9 metric tons of cocaine from smuggling vessels. It was the equivalent of 4.16 billion individual doses which is valued at $6.14 billion.

The Coast Guard conducts counter-narcotic missions throughout the globe, every single day.