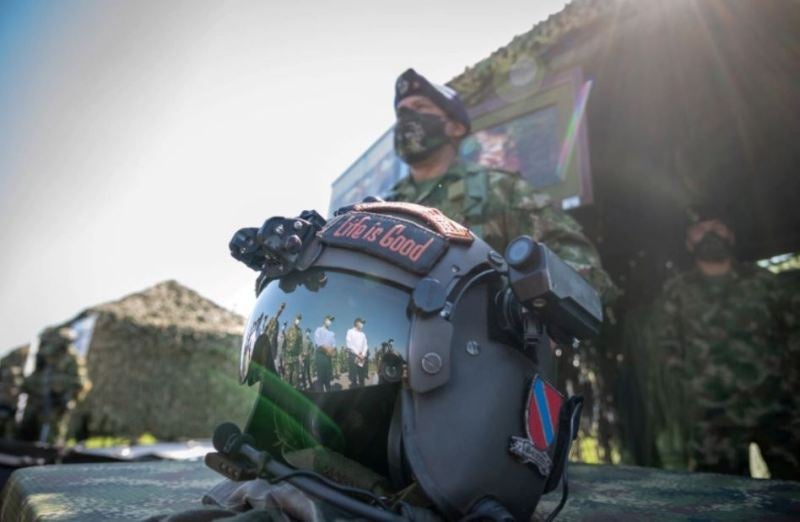 The Colombian military on Friday activated the elite Command Against Drug Trafficking and Offshore Threats (CONAT) unit. CONAT will be comprised of 7,000 troops and its purpose will be to fight narcos, rebels financed by drug trafficking and other illegal activities and which operate across the borders of Colombia and the region, and other organized gangs.

President Ivan Duque, speaking to the troops at the sprawling army base at Tolemaida in central Colombia, described the new unit as “historic.” Meanwhile, the unit displayed aircraft and armored vehicles in a show of force among the troops.

The force, Duque said, will be tasked with “subduing, beating and subjecting the structures of drug trafficking and the… threats linked to the illegal exploitation of minerals, trafficking of species, of persons and, of course, to any transnational form of terrorism.”

“The unit was born to hit, repress, and break down the structures of drug trafficking and transnational threats linked to illegal mining, the trafficking of wildlife, and people, and — of course — any transnational form of terrorism,” President Duque said at the event.

Colombia, considered the world’s largest producer of cocaine, had over 380,000 acres of the coca crop in 2019. That is an area larger than the combined bases of Fort Hood, TX and Fort Bragg, NC, the U.S. military’s two largest bases.

Colombia had suspended aerial spraying of glyphosate in 2015 following warnings by the World Health Organization (WHO) that the chemical was potentially damaging to health and the environment.Read Next: Colombian Security Forces Kill Top ELN Commander “Uriel”

The last active rebel group in Colombia, the National Liberation Army (ELN), finances its operations through drug trafficking, kidnapping, illegal mining, and extortion. Duque said that the unit will pursue the ELN and ex-FARC rebels who had rejected the 2016 peace deal “without qualms.”

“Soldiers, it is a morally necessary, morally correct battle… Let’s go for the defense of Colombia!” Duque added.

The long drug war, as well as a decades-long insurgency, left more than 260,000 dead and have displaced millions of Colombian civilians.

When Colombian President Duque announced the formation of the unit earlier this year, he mentioned that the ELN and other drug gangs had moved freely across the border of and “were protected in Venezuela.”

That prompted Venezuelan strongman Nicolas Maduro to rattle his saber and to “respond forcefully” although Colombia made no mention of crossing the border. Maduro, who is prone to making grand pronouncements, said that he ordered the military forces to “clean the barrels of our rifles to answer them at any level we need to answer if Ivan Duque dares violate the sovereignty of Venezuela.”

Colombia has broken off diplomatic ties with Venezuela since 2019 when opposition leader Juan Guaido was recognized as the interim president. Maduro ran a show election that was rigged. The European Union (EU), and the G7 group, Canada, France, Germany, Italy, Japan, the United Kingdom, and the United States, joined the EU in rejecting the results of the elections and denounced them as not “comply[ing] with international standards.”

Colombia has long accused the leftist government of Venezuela of supporting the terrorist insurgents of ELN and FARC. Venezuela has denied this.