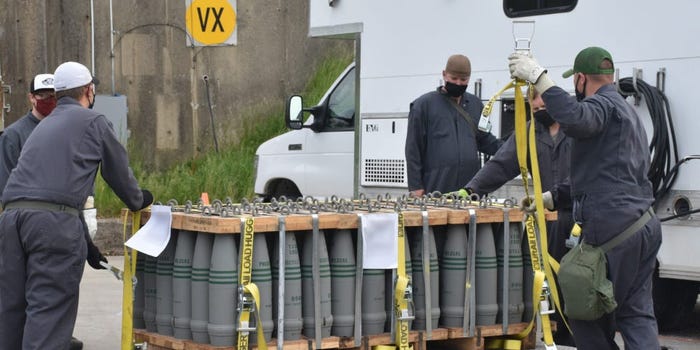 The US military delivered the last batch of the nation’s stockpiled 155 mm projectiles carrying VX nerve agent for destruction this week, according to the US Army Chemical Materials Activity.

The Blue Grass Army Depot in Kentucky is one of only two remaining chemical weapons stockpile locations in the US. The other is the Pueblo Chemical Depot in Colorado. Chemical weapons destruction began at the latter in 2015.

The Blue Grass Army Depot originally stored over 500 tons of mustard and nerve agents in 155 mm projectiles, 8-inch projectiles, and M55 rockets. Each 155 mm munition can carry either 6 pounds of VX or 11.7 pounds of a mustard agent.

The facility has already disposed of its 8-inch projectiles containing GB nerve agent, and it began disposing of the 155 mm H mustard rounds in 2019, with more than 64% destroyed by January 2021. Efforts to dispose of the 155 mm VX artillery shells started on January 10, 2021.

A BGCAPP spokesperson explained to Insider that the length of time it takes for the plant to destroy a batch of chemical weapons projectiles varies. The number of weapons the plant can process at a time can range from a handful to several dozen.

To dispose of the VX projectiles, automated equipment first dismantles the munition, and then the chemical agent and weapons components are destroyed separately through chemical and thermal treatments.

The next phase will start this fall, when the plant will start disposing of the M55 rockets, each carrying about 11 pounds of VX, that are still stored at the Blue Grass Army Depot.

The Department of Defense announced last September that the Pueblo Chemical Depot, once home to more than 780,000 chemical weapons munitions, had successfully disposed of all of its nearly 300,000 155 mm mustard agent projectiles.

The US military is working to eliminate its entire chemical weapons stockpile by the end of 2023 in accordance with the Chemical Weapons Convention. This international treaty prohibits the production and use of chemical weaponry and requires the disposal of stockpiled weapons.

“With the VX projectiles delivered for destruction, the US is one step closer to meeting its treaty goal,” Army Chemical Materials Activity said in a statement.