Situation Room meetings about the 2011 Osama bin Laden raid were named 'Mickey Mouse meeting' to ensure its secrecy, new account says - We Are The Mighty 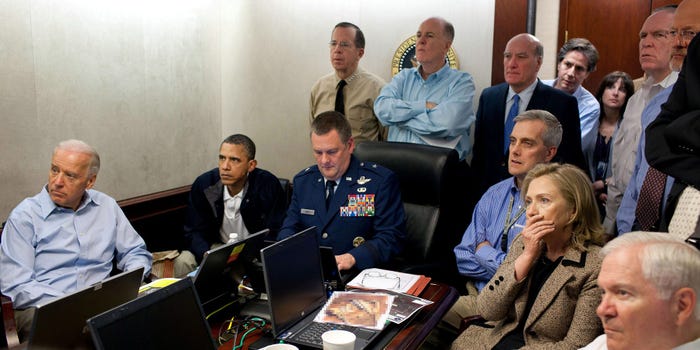 Situation Room meetings about the 2011 mission to kill Osama bin Laden were titled “Mickey Mouse meeting” on official calendars to conceal their purpose, according to a new account of the raid.

On Friday Politico published an oral history, written by Garrett M. Graff, of the bin Laden raid as told by 30 US political, military, and intelligence officials who were central to its success.

The officials said that in the run-up to the strike, which began on May 1, 2011, and concluded early the next day, they took many steps to ensure that news of the raid didn’t leak.

Mike Morell, who was deputy director of the CIA at the time, told Politico that the idea to label the meetings “Mickey Mouse meeting” came from John Brennan, then the White House homeland security and counterterrorism advisor.

“We also had the cameras and the audio in the Situation Room covered or turned off,” Brennan told the magazine.

Ben Rhodes, then-deputy national security advisor, also told Politico that he knew something serious was underway by looking at the titles of meetings listed on the Situation Room schedule.

“Suddenly, there was a very unusual pace of deputies- and principals-level meetings without a subject. I knew that there was something happening,” he said.

“At no other point in my eight years in the White House did that happen until 2016 with the Russian interference in the election.”

Former President Barack Obama was also keen to prevent any news of the mission getting out, especially if it ultimately went badly or failed.

On April 30, 2011, the evening before the raid began, Obama asked his speechwriter Jon Favreau to change a joke prepared for that night’s White House Correspondents’ dinner, where the president typically makes a speech mocking himself.

To hit back at GOP figures for mocking his middle name — Hussein — Obama was going to crack a joke in which he referred to “Tim ‘bin Laden’ Pawlenty,” referring to the then-Minnesota governor, Favreau told Politico.

“He’s like, ‘Why don’t we say his middle name is Hosni, like Hosni Mubarak?’ I remember just being like, ‘That’s not as funny.’ And Obama is like, ‘Trust me on this. I really think Hosni will be much funnier,'” Favreau said.

Dan Pfeiffer, then the White House communications director, said: “No one could figure out why Obama made that change. It seemed like a weird change.”

President Joe Biden on Sunday issued a statement marking 10 years since the raid that killed the terrorist leader, saying: “We followed bin Laden to the gates of hell — and we got him.”