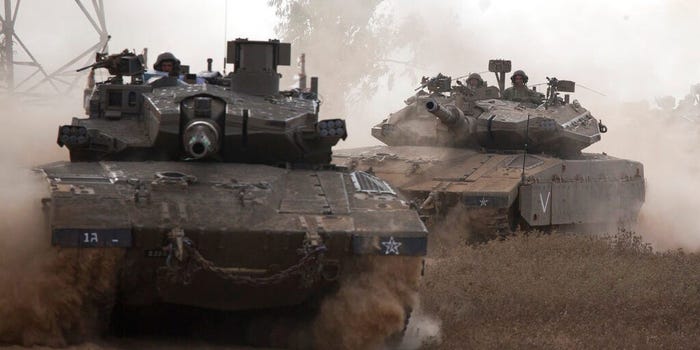 The deadly exchange of fire between Israel and Hamas that has already killed almost 100 people in recent days is some of the most intense fighting since the 2014 Gaza War.

Simmering tensions boiled over this week as Hamas unleashed hundreds of rockets on Israeli cities and Israel launched hundreds of airstrikes on Hamas positions in response.

Israel has started moving troops toward the border of the Hamas-controlled Gaza Strip, according to an Israel Defense Force spokesperson, raising the possibility of an invasion.

“There are troops that are being moved towards the borders,” Lt. Col. Jonathan Conricus explained to the BBC, calling it a “preparatory move” so that Israeli forces will be ready for “all eventualities and an escalation.”NEWSLETTERStart your day with the biggest stories in politics and the economy. Sign up for 10 Things in Politics.Email addressBy clicking ‘Sign up’, you agree to receive marketing emails from Insider as well as other partner offers and accept our Terms of Service and Privacy Policy.

Israel responded to a barrage of rockets Thursday with more airstrikes and artillery shells as it called up thousands of reservists for a possible invasion, The Associated Press reports.

The last major Israeli ground offensive into Gaza began on July 17, 2014 — 10 days into a serious conflict with Hamas that would last 50. The ground invasion was the expansion of Operation Protective Edge, which began on July 7 in response to Hamas rocket fire following smaller clashes and elevated tensions.

The invasion that summer was the first significant armed incursion into Gaza since 2009, when Israel and Hamas fought a horrible three-week fight that took over 1,400 Palestinian and 13 Israeli lives.

When the Israeli invasion began, casualties from the fighting, which had been limited primarily to rocket fire and airstrikes, were already in the hundreds, The Washington Post reported at the time.

“We have hit Hamas hard and we will continue to hit Hamas hard,” the Israeli military said on social media as the invasion began. Hamas said the Israelis had “taken a dangerous step,” warning that “the occupation forces will pay a high price.”

Numerous Israeli infantry and artillery units, supported by air and naval assets, entered the Gaza Strip focused on crippling Hamas ability to fire rockets at Israel and destroying the dozens of tunnels used to infiltrate Israel and launch assaults.

Dozens of Palestinians were killed on the first day of the ground offensive, both combatants and civilians, Reuters reported at the time, citing Palestinian and Israeli officials.

Similar to the Biden administration’s official statements on the latest round of fighting between Israel and Hamas, President Barack Obama acknowledged Israel’s right to self-defense but said “we are hopeful that Israel will continue to approach this process in a way that minimizes civilian casualties.”

The fighting that followed caused significant devastation inside the Gaza strip.

Almost two weeks into the conflict, the number of fatalities had risen to nearly 400, almost double what it was a few days prior, with Palestinians making up the overwhelming majority of the deaths, The Associated Press reported.

Among Israel’s casualties, the Israeli military also saw losses in the fighting.

The official end of hostilities, however, did not come for almost another month. Israel and the Palestinian militant forces agreed to an unconditional ceasefire on August 26, 2014.

“Palestinians and Israelis were profoundly shaken by the events of the summer of 2014,” a UN report on the bloody conflict said. “In Gaza, in particular, the scale of the devastation was unprecedented.”

UN investigators said that Israel conducted more than 6,000 airstrikes during the conflict while Palestinian militants fired over 6,600 rockets and mortars at Israel.

The report said that 2,251 Palestinians died during the fighting.

Among the dead were 1,462 Palestinian civilians, including 299 women and 551 children. Another 11,231 Palestinians were wounded, with at least 10% suffering some form of permanent disability. Israel was critical of some of the report’s findings.

In Israel, six civilians and 67 soldiers were killed, and 1,600 people, including 270 children, suffered injuries as a “tragic result of the hostilities,” the report said.

The UN team acknowledged that the casualty figures collected by the UN, Israel, the Palestinians, and non-governmental organizations vary.

“Regardless of the exact proportion of civilians to combatants,” the UN report argued, “the high incidence of loss of human life and injury in Gaza is heartbreaking.”

There are concerns that another ground offensive could also have devastating results.

Speaking to Insider about past and present conflicts, Israel Defense Force spokeswoman Capt. Libby Weiss told Insider Thursday that “after every operation that the IDF has, there is an extensive process of learning, understanding what took place, and applying those lessons to training and to better preparedness for the future.”

She said that the challenge is that Hamas operates in and around civilian infrastructure in a densely populated area, making it difficult for Israeli forces to target Hamas and ensure its own defense without sometimes affecting civilians.

That said, Weiss stressed that “when it comes to our practices in the Strip, we are obviously very concerned about the impact on the civilian population within Gaza.”