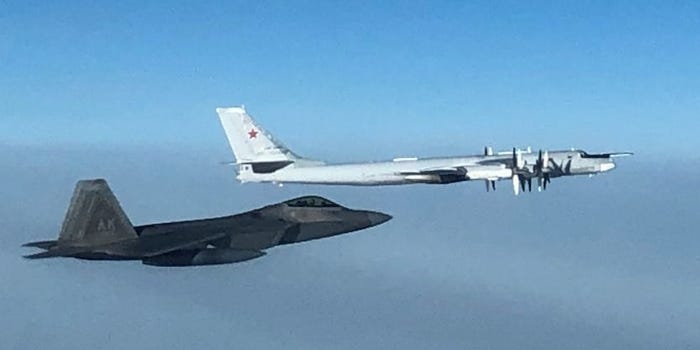 The military command responsible for defending the the US and Canada from attack responded to more Russian military flights near Alaska last year than any year since the end of the Cold War, the four-star general leading the command said Tuesday.

“Last year,” the general told lawmakers Tuesday, “NORAD responded to more Russian military flights off the coast of Alaska than we’ve seen in any year since the end of the Cold War.” These flights involved heavy bombers, anti-submarine aircraft, and intelligence assets.

VanHerck said that the Russian military flights near Alaska “show both Russia’s military reach and how they rehearse potential strikes on our homeland.”

The Russian military aircraft, which include Tu-160 and Tu-95 long-range bombers, Tu-142 anti-submarine warfare aircraft, Il-38 maritime patrol aircraft, and A-50 early warning and control planes that are regularly accompanied by Su-35 fighters, are typically intercepted by US Air Force F-22 Raptors assigned to NORAD whenever they fly into the Alaskan Air Defense Identification Zone.

No Russian military aircraft has at any point breached US or Canadian airspace, which extends out to 12 nautical miles from the US coastline.

Russian long-range air patrols were fairly common during the Cold War but became less frequent in the aftermath. In recent years, these flights have again become frequent occurrences.

The US military also conducts bomber flights near Russia, which have prompted the Russian military to scramble interceptor aircraft in response.

In addition to frequent military flights near Alaska, the Russian Navy also conducted exercises focused on maritime approaches in the Arctic and Pacific. The drills also involved anti-submarine patrols and anti-ship cruise missile launches in the US exclusive economic zone, an area that extends out 200 miles from a country’s coastline.

In his written testimony, VanHerck asserted that “Russia presents a persistent, proximate threat to the United States and Canada and remains the most acute challenge to our homeland defense mission.”

VanHerck argued that Russian leaders “seek to erode our influence, assert their regional dominance, and reclaim their status as a global power through a whole-of-government strategy that includes information operations, deception, economic coercion, and the threat of military force.”

The general said that should the US wind up in conflict with Russia, “we should expect Russia to employ its broad range of advanced capabilities—nonkinetic, conventional, and nuclear—to threaten our critical infrastructure in an attempt to limit our ability to project forces and to attempt to compel de-escalation.”

He also called attention to Russian newer offensive capabilities such as advanced cyber and counterspace weapons, as well as hypersonic weapons.

VanHerck told the Senate Armed Services Committee in the coming years, “Russia hopes to field a series of even more advanced weapons intended to ensure its ability to deliver nuclear weapons to the United States,” pointing to the Poseidon torpedo, one of several “doomsday” weapons Russian President Vladimir Putin touted a few years ago.

The general’s comments come as the US military focuses intently on China, which Department of Defense leadership has called “the pacing challenge” for the US. The Biden administration has repeatedly made a point of identifying China as the priority challenge.