Meet the Air Force’s top couple - We Are The Mighty 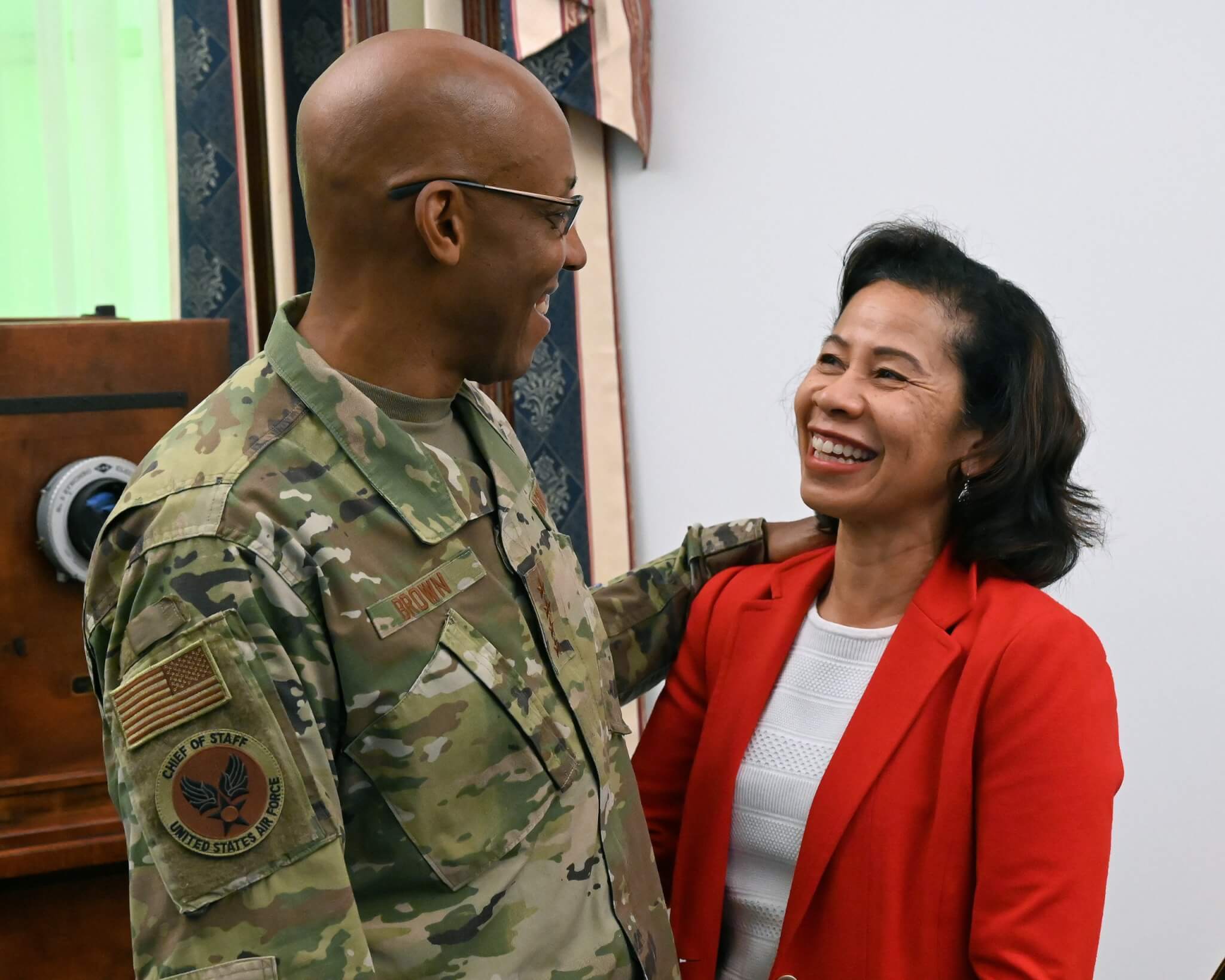 The Browns are self-proclaimed foodies who explore the DMV restaurant scene and steal time for walks together. It is during these no-tech-allowed strolls when the Air Force’s top couple catch up on their days and feed their relationship. Pun intended.

And it takes work to maintain, Air Force Gen. Charles “CQ” Brown Jr. said of marriage and a military career. He and his wife, Sharene, met after he was already an airman but she was no stranger to the lifestyle. Her dad served in the military.

Sharene Brown says the adventurous side of military life has long been a favorite aspect of being a dependent ID cardholder. It is likely the characteristic that kept her “all in” throughout the decades her husband has been building a career.

“First of all, I would describe military life as adventurous. I’m an adventurous person anyway; I like to travel; I like to see different things and what not. Since coming into the military as a spouse, I have found some of the same challenges a lot of our younger spouses have found,” Sharene Brown said.

A 2019 survey found the rate of unemployment for military spouses to be 24%, according to Blue Star Families. It is reflective of the old adage that as much as things change, they stay the same. In fact, Sharene Brown said change is the one thing that remains constant throughout the decades for those married to service members. She can also relate to hardships in pursuing and maintaining professional aspirations.

“There are things that I have experienced that I have grown from, but there are still some circumstances that are not much different. If I go back a few years to when I first came in, I was looking for a job and had a hard time finding one, moving from place to place. Then our family started to grow … our oldest son has some learning challenges, and so the plan was to go back to work after he got into school. It didn’t necessarily work out because of the challenges and I was determined at that point to just make sure he was going to be fine,” she said. “But what I found is when one door closes, another door usually opens.”

The connections she built over the years alleviated some of the common stressors she faced. Sharene Brown was not shy to dig in at duty stations, either. She relishes in the couple’s time overseas where they often chose to live off base to get a greater sense of the culture. Her favorite location was at Doha, Qatar, where she participated on a dragon boat team.

Gen. Brown also grew up as a military kid. His dad, who retired from the Army as a colonel, guided Gen. Brown through the process of applying for ROTC scholarships. Ultimately, he said, the Air Force stood out for its opportunities in engineering.

In 1984, Gen. Brown was commissioned as a distinguished graduate at Texas Tech University. He has served in a variety of positions at the squadron and wing levels, including an assignment to the U.S. Air Force Weapons School as an F-16 Fighting Falcon Instructor, according to his official biography. He said it was working with the people at that school that led to a snowball effect of positive career experiences, leading him to contemplate a long-term future with the Air Force. Then, a notable staff tour as Aide-de-Camp to the Chief of Staff of the Air Force opened his world even further.

“I got to see a bigger part of the Air Force. Exciting mission, a lot of responsibility, get to see the world, and get to meet a lot of good people,” he said.

In the summer of 2020, Gen. Brown became the first Black service chief in U.S. military history — an appointment that intersected with a period of heightened racial tension after George Floyd, an unarmed Black man, was killed by a Minneapolis police officer. Gen. Brown says he is keenly aware of the significance of his role, but also emphasizes that he wants to be judged on the merits of his performance rather than the color of his skin.

“I would say there’s a before and an after: before George Floyd and after George Floyd. Before, I already knew it [my appointment] was historical in the like, and you know I’ve thought about it but I haven’t really. Partly because, a lot of the times in the jobs I’ve been in, I’ve been either the first of or the only one. It’s probably in some cases — I hate to say it this way — it’s a bigger deal for some others than it is maybe for me because I’ve lived this. … I am who I am and I just want to be good at what I do, and be recognized as a good officer. And then after that, be recognized as a good African American officer. Just like any other officer or leader, you just want to be recognized as a good leader.

“I think after George Floyd, a bit more visibility and pressure was on the fact that I’m coming into this position. I think it adds a bit of extra weight because there’s some expectation that I’m going to be able to do things, but I’m just one person and I have almost 700,000 airmen that will have to buy into whatever good idea I come up with. And so, when we start looking at diversity and inclusion, it has to be things the whole Air Force can buy into and not just happen because I’m sitting in this chair as Chief of Staff of the Air Force,” he said.

The full report can be found at https://www.af.mil/Portals/1/documents/ig/IRDR.pdf

Gen. Brown said small steps have been made, but his priority is to do “the deeper dive” that would include determining the root cause of the problem so recommendations can then be made of how to move forward. One example he cites is getting underrepresented demographics into aviation career fields.

“Do some of the tools we have, are they biased in some way? Not purposely but for whatever reason, we may have missed opportunities and that all comes down to exposure. We only aspire to be what we’ve been exposed to, so looking at how we can lay that out earlier for underrepresented groups, whether it’s race, gender, ethnic background,” he said.

At the same time, leaders are grappling with the ongoing pandemic that has placed restrictions on the normal way of doing business. Gen. Brown says an integral part of checking the morale and mental health of the force starts with building relationships.

“The key part is knowing your people, and you can’t know they’re having a bad day if you don’t know them — because you can’t tell the difference between a good day and a bad day. And some of that has to happen before you get into a crisis. I found just a few minutes goes a long way. It’s building relationships with the people you work with; you got a professional relationship but you also got to have a little bit of a personal relationship — know about them, their family, some of the ups and downs they have, and talk to them about what they do in the evenings, what they do on the weekends. By building relationships, when they do have a problem, they may be more inclined to talk to you, to seek help,” he said.

The line of communication between airman and leader is also important, especially for those junior enlisted members and officers who have certain aspirations in the Air Force. Gen. Brown tells airmen to “take your chances.”

“Always ask for what you want. The worst the Air Force can do is tell you no, but they can’t tell you yes unless you ask,” he said. “I just tell airmen to explore what it is you want to be able to do, and then share that with your leadership so they have an opportunity to help you get to where you want to go. Or, to help you understand you may not be qualified for where you want to go — but you have to have the conversation. If you keep it to yourself, you may miss an opportunity or talk yourself out of it.”

Gen. Brown is adamant that his vision for a successful tour will be the same in years to come as it is today: he wants to make a difference.

“Flying was not the reason why I came into the Air Force or even why I stuck around. I mean, I like to fly, but it’s not the end-all be-all for me. It’s making a difference and that’s the key part; if I can do something that will change the Air Force for the better, make it better for our airmen and families. I would consider myself a failure if I didn’t make a difference in some form or fashion,” he added.

Follow twitter.com/GenCQBrownJr for updates on the 22nd Chief of Staff of the United States Air Force.

You can find this story and more in our February issue of Military Families Magazine. Download it here.