Airman shares experience of being in DC for historic activation 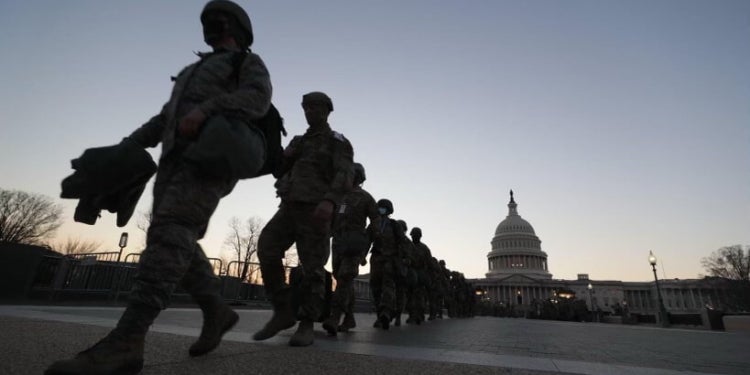 Mitchell, an intelligence analyst in the New Jersey Air National Guard, found plenty of that and more on her first activation: establishing security around the United States Capitol building and ensuring the safety and security of elected officials after the Jan. 6 riots.

“It was surprising but not shocking to know the Guard would have to be activated after what happened,” Mitchell said. “We really didn’t think about it. It was just time to pack up and get ready to go. Like our motto reads, ‘Always Ready, Always There!’”

Mitchell’s group, the 140th Cyber Squadron — part of the 108th Wing at Joint Base McGuire-Dix-Lakehurst — arrived in Washington D.C. on Jan. 10 and have not yet left.

“We have been training to ensure a peaceful transition of power for the 59th Presidential Inauguration, and that we can meet the challenges that come with missions that are sensitive to people such as this,” Mitchell said. “I never thought I would be in a position to make such a difference for my community, state, and country.”

It’s a definite role reversal for Mitchell and her husband, a retired chief master sergeant who spent nearly 29 years on active duty with the New Jersey Air National Guard and National Guard Bureau. Courtney Mitchell, who was named the 2017 Armed Forces Insurance New Jersey National Guard Spouse of the Year, spent nine of those years as the military spouse — but now it’s her husband’s turn, which she finds “pretty cool.”

She is also impressed with the way so many soldiers and airmen have been activated and moved in such a short amount of time.

“Our leadership has been amazing and has helped us navigate through some unprecedented times,” she said. “We are prepared and ready to protect the Capitol and perform the mission. This is an honor for me. I know from watching my husband through his career that these types of domestic operations and responses have been practiced and rehearsed for years.”

Mitchell had been to the Capitol several times before, but never in this capacity. Her unit’s basic needs were met “pretty quickly,” she says, allowing the guardsmen to concentrate on their mission.

“This is a great opportunity to be part of an event that supports the peaceful transition of power and ensures the safety and wellbeing of our fellow Americans,” she said.

Mitchell wants Americans to see the Guard’s activation to the Capitol as a reason not for fear, but to be inspired.

“I want everyone to look at our soldiers and airmen here, and view us as an example of unity and strength,” she said. “When people see the National Guard, they know we are here to help. We are more than just a security force. We have come together from all over to stand together, side by side, for the love of our country.”

She adds that there is strength in unity.

“We will become stronger tomorrow for the challenges we face today,” Mitchell said.