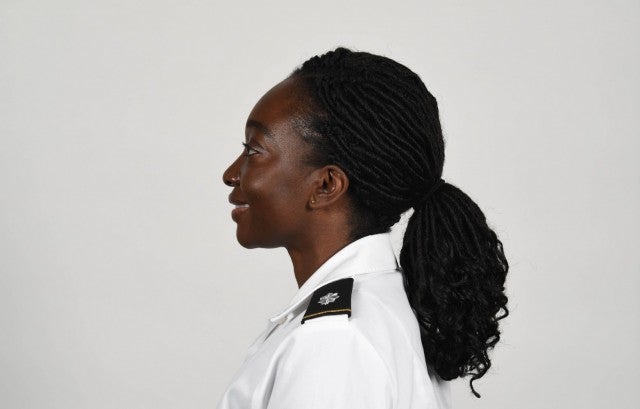 WASHINGTON – The U.S. Army announced an update to its grooming policy, which now allows female Soldiers to wear ponytails in all authorized U.S. Army uniforms.

In February the Army revised guidance on grooming standards after a DOD-mandated review of our policies. Through feedback from the Force resulting in a clear, consolidated policy recommendation from a group of Soldiers, the Army reconsidered and approved the wear of ponytails.

“This new modification is more practical for our female Soldiers. It allows them flexibility in a tactical environment, while maintaining a professional appearance in garrison,” said Sgt. Maj. Brian C. Sanders, Army G-1 Uniform Policy Branch Sergeant Major. “This change also helps to alleviate hair loss and damage to the scalp.”

The Army previously approved healthier hairstyle options that are more inclusive of various natural styles in an effort to stop hair damage and loss stemming from styles like the bun.

The Army consistently evaluates regulatory guidance, including uniform and grooming policy, to better the lives of our people, our top priority. Grooming and pride in one’s uniform directly impacts discipline and personal readiness, which affects unit readiness.

The only exception on the length of the ponytail or braid is while conducting tactical or physical training. The length of the hair should not hinder a Soldier’s performance or present a safety risk.

“Commanders will analyze the risk of a free hanging ponytail or braid and use commander’s discretion to determine if long hair will be secured or tucked inside the uniform top,” said Sanders.

A complete list of changes to the Army’s appearance and grooming standards is published at https://armypubs.army.mil/Publications/Administrative/POG/SA.aspx