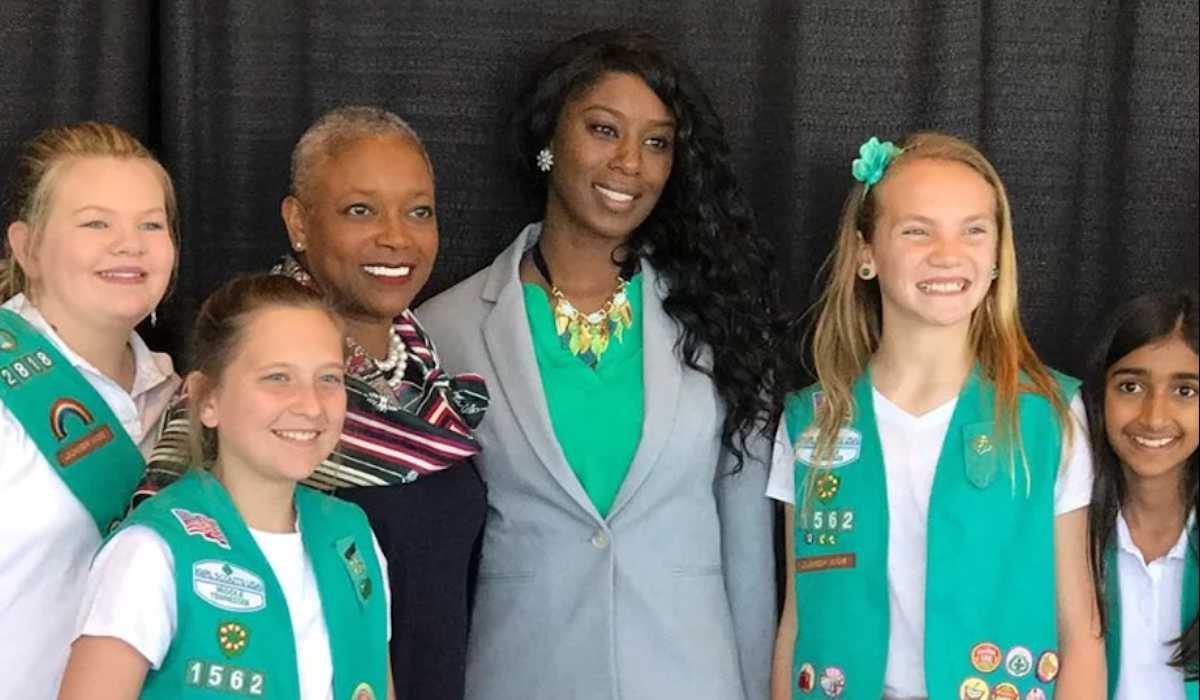 As entrepreneurs, it’s easy to get caught up in what we see as the success of others, but if social media has taught us anything, it’s that perception and reality are often quite different. Air Force veteran and founder, Charlynda Scales, wants more entrepreneurs to realize this.

From Scales’ experience, when we see someone achieve what appears to be significantly more than what we’ve accomplished, it sometimes makes us think we must be doing something wrong. Or maybe we aren’t smart enough or working hard enough. But more often than not, it’s none of that. It’s simply the fact that we’re only seeing the carefully crafted picture that person wanted you to see.

Scales is the founder of Mutt’s Sauce, speaker at the Military Influencer Conference, winner of the Heroes to CEOs grant contest run by Bob Evans Foods, and a mentee of FUBU founder Daymond John.

She says that despite her success, the reality of her situation behind the scenes was often far different than what other people assumed. They would see her activity on social channels, speaking at events and being featured by the media, and assume that her company was larger and generating significantly more revenue than it was.

She recalls a particular situation that exemplified this when she was asked to participate in an event hosted by Hill Vets. She had just left an unhealthy relationship taking only her clothes with her, was sleeping on a cot in an unfurnished apartment, and got a free makeover at the makeup counter in the mall before the event. She even wore a dress that she bought for $700, carefully tucking the tag away so that she could later return it after the event.

Seasoned entrepreneurs can relate to this experience, but many new founders don’t yet understand that the reality of entrepreneurship is often nothing like the glossy image we see on the surface.

There’s a lot of hard work, failure, challenges and disappointment behind the scenes. In many ways, it’s a lot like the military in that you need to be there for the right reasons. You need a powerful “why” to drive you through the hard times.

Scales’ path was no surprise to anyone who knew her—after ROTC at Clemson University, she commissioned in the Air Force and became the fourth generation of veterans in her family. In fact, her company was named in honor of her grandfather, Charlie “Mutt” Ferrell Jr., who was also an Air Force veteran and served in Vietnam and Korea.

Scales then started Mutt’s Sauce while stationed at Wright-Patterson Air Force Base in Dayton, Ohio, with the only remaining copy of a recipe that had been handed down by her grandfather.

Her business grew rapidly from there, but her journey also included a number of challenges along the way.

Initially, she started by working with the local Amish community to handle contract manufacturing for her products in batches of 700-1000 bottles at a time, which she would then pick up and deliver herself. She quickly outgrew their capabilities and began seeking manufacturers who could handle a larger volume. Since then, she’s had to switch manufacturers three times to handle her consistently growing volume.

She sold just 18,000 bottles in 2018, followed by 36,000 in 2019, and then like most of us, was blindsided in 2020 by COVID. While she was already working on building a stronger online presence, this global event forced her to make a massive and immediate pivot, going all-in on e-commerce. Today, her products can be found on her own website and in several retail stores.

But Scales doesn’t attribute her success only to herself—she says she had a lot of help along the way, and she’s a huge believer in collaboration and mentorship because she’s experienced the leverage they create first-hand.

Unsurprising to most veterans, upwards of 90% of her collaboration comes from fellow veterans, many of whom she met through the Military Influencer Conference. But she has also collaborated with and received mentoring from industry titans like Daymond John, who was so impressed with what she had accomplished that he made her a Rise and Grind ambassador and included her in his latest book, Powershift.

In 2017, she learned about another opportunity for collaboration—the Heroes to CEOs grant, run by Bob Evans Farms. Candidates had to submit a video telling a compelling story about their business’s veteran backstory for a chance to win a $25,000 grant.

Mike Townsley, CEO of Bob Evans Farms, explained that the program is their way to carry on the spirit of Bob Evans, the company’s late founder. “He had a soft spot for the military and veterans because he served in the Army,” Townsley said.

For the second annual Heroes to CEOs contest, in addition to the grant, three finalists won a trip to New York City where they also received mentoring from Bob Evans Farms executives and a half-day coaching session with Shark Tank judge Daymond John. “He’s equipped to teach them ways to gain momentum that are unique to an entrepreneur,” Townsley said. “It’s so much more different starting a small business wearing many hats, versus a large corporation that I run.”

Scales, who was an Air Force Reservist at the time, was one of the finalists.

“I answered a call from an unknown number,” she said, “and it was Daymond John telling me I won the contest. I just lost it. I cried.”

But she’s most passionate about collaborating with fellow veterans.

One of those veterans was Molly Mae Potter, who won Ms. Veteran America in 2016, a contest where Scales was 2nd Runner Up. Potter and Scales attended the Military Influencer Conference together and served as ambassadors for Final Salute, an organization that helps house homeless female veterans.

“My grandfather taught me humility will take you further than money,” Scales said.

With her tenacity, collaboration with fellow veterans, mentorship from entrepreneurs like Daymond John and grant money from Bob Evans Farms, Charlynda managed to scale her company from a meager $30,000 its first year to almost $80,000 in 2019.

“I do it because my grandfather sacrificed so much for his family — because I’m fourth-generation military, and that means something. Because my mother gave up everything so I could get an education. Because everything is connected and things happen for a reason. I tell people all the time they need to spend some time understanding that reason – to harness their why – so that they can walk in their purpose.”

For Scales, it’s about building a legacy.