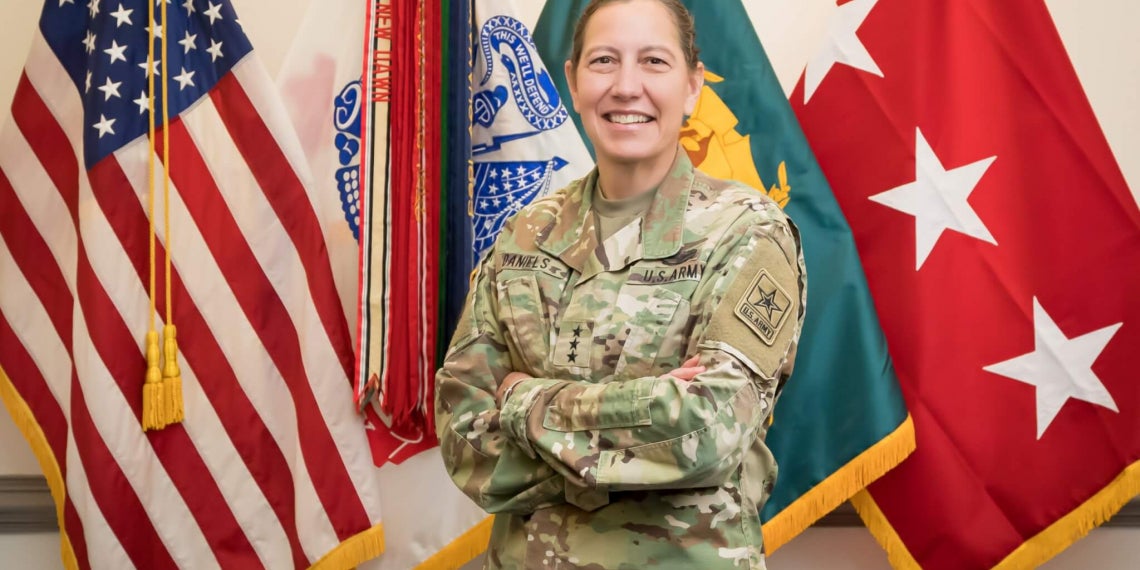 The head of the Army Reserve is crashing virtual battle assemblies to get face time with soldiers.

Lt. Gen. Jody Daniels assumed her new role in the summer of 2020, making history as the first woman to lead the Army Reserve. She also stepped in as chief at a time when the pandemic was in full force, ultimately changing how soldiers recruit and train — but not how they lead. In fact, Daniels says the situation has presented opportunities to improve connectedness between soldier and leader.

“One of the really great things is, it has enabled us through some of the software to have outreach at all different times visually — that we didn’t necessarily have before — because you could do it from your own personal device. … I think we’ve become more personable, overall.” she said.

But at the same time, Daniels adds that she is “looking to get back to as much of in-person activities as we can do, while protecting the force, while being smart about how we do it.”

Daniels’ career spans more than 36 years, including active and reserve military service that started when she decided to apply for ROTC scholarships in high school. Her father, a Vietnam veteran, spent decades in the Army but she said he was always “just dad” to her, not the “Army guy.”

She switched components to the Army Reserve after being accepted to a fully-funded, graduate-level program at the University of Massachusetts at Amherst. Daniels completed a M.S. and Ph.D. in Computer Science. She describes the operational pace of leaving active duty as being “a little bit different.”

“On the reserve side, you have to manage your business, whatever you’re doing for work, or if you’re going to school as a full-time student, like I did for many years; plus, whatever you’re doing for family members and having a life … on the active-duty side, you have perhaps longer days but you probably don’t have a second job as well. So how you balance those things becomes an interesting challenge. I think on the reserve side, we get really good at time management,” Daniels said.

And leaving active duty was not the only cultural change she experienced, she says. A deployment to Kosovo ended up being one of the most impactful billets of her career and tested everything she had been taught up until that point.

“I went over to Kosovo on an all-expense paid trip in the summer of ’99 and I went from intel, where you don’t tell anyone anything, to civil affairs, where you tell everyone everything. And that was sort of a whiplash between the culture I had been in and the culture that I was working in. … So that was a very different change in how I had been operating,” she said.

Now that she has been in her position for some months, Daniels is playing the long game in terms of priorities for what she plans to accomplish. Retention remains at the top of the list, which she says starts with getting soldiers “around the bend.”

“I have a four-year term and I am very much about what I’m calling getting around the bend. The Army Reserve has a unique structure because of the amount of generating force that we have. Instead of being your typical pyramid, we have this sort of diamond shape where I don’t have as many positions at the junior ranks, and then we turn the corner at captain and at sergeant, and go on up to a normal pyramid.

“My challenge is I’m not getting people around the bend, so trying to fill in that specialist to sergeant, and then sergeant to staff sergeant; and then on the officer side, getting those lieutenants to become captains and then go on to be majors — to fill that pipeline up because right now I’ve got my mid-grades are under strength and that’s going to take four years to really push around those bends as much as possible to start filling the pipeline.”

It isn’t a feat she can finish in four years, she added, but she can make headway in improving the experience of being a junior-level leader. Among the steps she plans to take include:

1) Look at policies and administrative processes that make jobs at the junior level harder than they need to be;

2) Remove bureaucracy, including having signature authority lower so documents don’t take so long and actions can happen sooner.

The Army Reserve has experienced many changes since Daniels first wore a uniform some three decades ago, which includes the moment she took her oath last July. In addition to technological changes, the mission also shifted from being a strategic reserve to an operational reserve “where we’re called in on a regular basis to help out with various different missions,” she says.

“[It] is a very different mindset from where we were 30-plus years ago,” Daniels said.

For those considering the military as a long-term career, she recommends two focuses.

“One is, for whatever position you’re doing, do your best at that job. Work hard, learn as much as you can about it, grow yourself and enjoy it, make the most of that opportunity, whatever it is,” she said. “The other advice that I give is to look two positions ahead. So, not your next job but the one after that. Talk to leadership and mentors as to what that set of opportunities can be … and if you find something that is a little further out that could be of great interest, you may need to take a course or learn a little bit about something to be ready for that position that is two out.”

Daniels credits two mentors with pushing her to think outside the horizons she had initially set for herself. The first was an Army boss who gave her the confidence to apply for graduate school; the other was then-Brig. Gen. Rick Sherlock who put the War College on her radar. It is among the reasons she encourages current leaders to look for strengths in people rather than focus on their weaknesses — a sentiment she echoed in her initial message to the force in 2020.

“My charge to our team is this: treat one another with dignity and respect at all times. Foster a mindset of teamwork, continuous learning, and growth so our Soldiers desire to continue to serve and lead. This culture of teamwork and growth is essential to shaping our future,” the letter stated in part.

New Year’s resolution: Three years ago, Daniels adopted a functional fitness routine and has maintained that goal. Now, she said, she is less concerned about her ACFT performance because of that commitment.