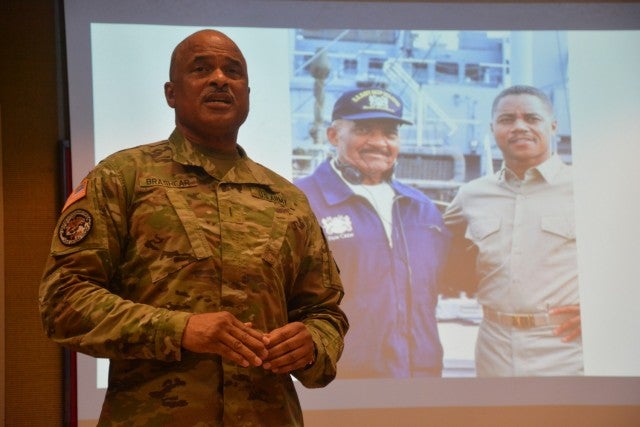 The theme for this year’s observance is “Honor, Remember, Inspire.”

Chief Warrant Officer 5 Phillip Brashear of the 80th Training Command, a U.S. Army Reserve unit based in Richmond, Virginia, served as the program’s guest speaker. Brashear is the third-born son of the late Navy Master Chief Petty Officer Carl Brashear, who is the subject of the well-renowned film “Men of Honor,” and whose role is played by actor Cuba Gooding Jr.

Phillip said he likes to share his father’s story in hopes of inspiring others to overcome all adversity.

Born in 1931 to a family of sharecroppers in Kentucky, Phillip said that his father faced many obstacles during his lifetime. But Carl refused to let them get in the way of setting out to accomplish what he believed God had intended for him.

With barely an eighth grade level education, Carl enlisted in the Navy in 1948 at age 17.

“Race, poverty, and illiteracy were three things that my father had to face before he finally joined the Navy to try to do better in his life … three things still affect every country today,” Phillip said.

But his obstacles were far from over. Even among the ranks, racism was rampant. Being a Black man during that time meant career paths in the military were very limited. But Carl set his sights on becoming a diver and succeeded in 1954, making him the first African American Navy diver.

About 12 years into his career, Phillip’s father was involved in a military operation off the coast of Spain where he was sent in to assist with bomb recovery. During the operation, Carl suffered an injury that later required his lower left leg be amputated. The injured diver could have decided that was the end of his military career, but he refused. Instead, he endured months of pain and rehabilitation, determined to prove to the Navy he could still perform his duties.

“At any point, my father could’ve said, ‘This is too much for one man to bear,’ but my father wasn’t built like that, and he wasn’t going to take ‘no’ for an answer,” Phillip said. “My father said, ‘You know what? What’s for me is for me, and what God told me I could accomplish, I can accomplish despite.’”

The following year, in 1967, Carl returned, making him the first amputee to return to active-duty after the loss of a leg.

“If the Navy saw any fault in his abilities, the Navy was going to retire him,” he said. “He struggled and he endured, and he stayed in shape so that he could do what he had to do.”

“He knew in his heart that he didn’t want to quit, and he knew he had faith and God on his side; he overcame,” Phillip said of his father. “We don’t have the right to quit. No matter how hard we think we’ve got it, there’s always somebody who’s got it worse. Always.”

Phillip showed photographs to the audience of his father during physical rehabilitation. The images illustrated some of the obstacles he faced including donning a 300-pound dive suit in harsh conditions, and climbing a metal staircase with weights over his head while wearing dress shoes. Had he slipped and fallen, Phillip believes the Navy would have discharged his father.

In doing so, Phillip said that his father proved “nobody can take your goals away from you.” It was one countless life lessons he carries with him and shares with others.

Carl continued his service as a re-certified Navy diver until 1979, when he retired. Although the senior Brashear received an honorable discharge, Phillip said that his father admitted to having an alcohol addiction and sought help prior to his discharge – yet another hurdle he was able to overcome.

“Obstacle in the way? Deal with it. Move it, knock it down, go around it, obliterate it,” Phillip said. “It’s not a sin to get knocked down. It’s a sin to stay down.”

The elder Brashear passed away in 2006, but his legacy lives on in the stories his family shares and in multiple physical forms throughout Kentucky, such as the Carl Brashear Memorial Bridge in Tonieville, Kentucky and a marble statue in the Kentucky State Capitol Rotunda.

Reflecting on what Phillip shared, Col. Carlene A. S Blanding, EAMC commander, said it occurred to her that people “have no reason to not succeed.”

“It’s about action, and I think CW5 Brashear has laid the path of his father’s story for all of us,” Blanding said. “We have great opportunities, and it is our responsibility to make sure we capitalize on those opportunities.”