Green Berets head ‘into thin air,’ training for mountain warfare in Nepal’s legendary Himalayan Peaks - We Are The Mighty 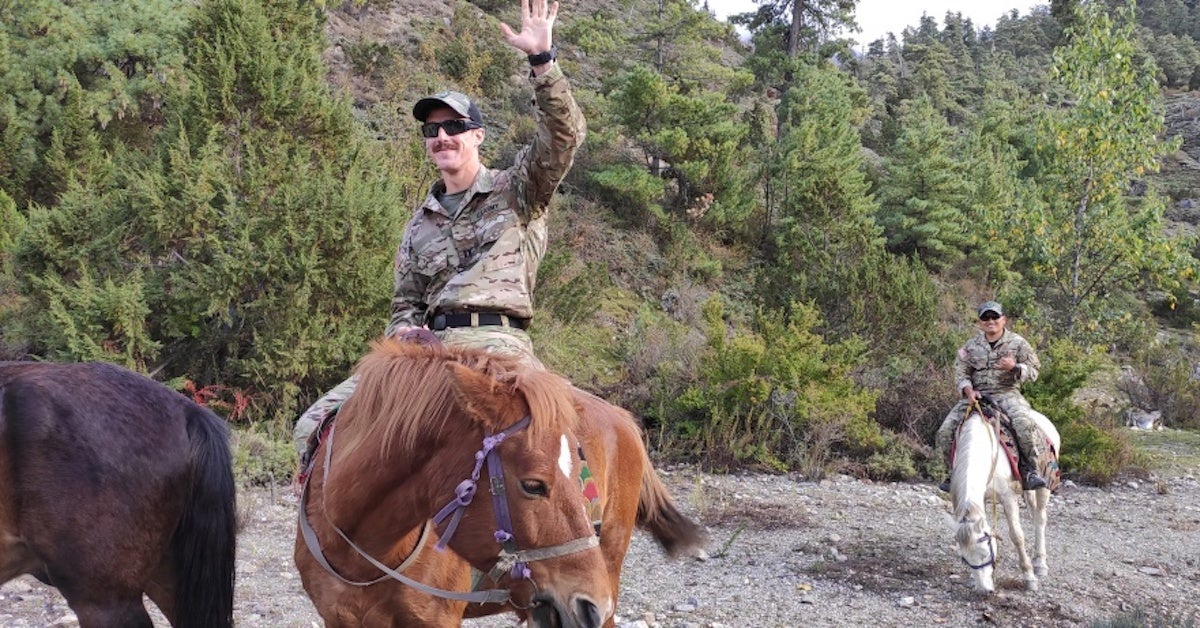 The Army’s Green Berets need mountain warfare training — and what better place to do it than on the so-called roof of the world?

About the size of the US state of Georgia, Nepal is wedged between India and China along the length of the Himalayan mountain range. The mountain kingdom is home to eight of the world’s 14 highest mountains, including 29,029-foot Mount Everest, the world’s highest peak. For two 1st Battalion, 1st Special Forces Group (Airborne) Green Berets, this was the perfect turf on which to hone their mountain warfare prowess.

In September and October, the pair of Special Forces soldiers spent six weeks with the Nepali Army High Altitude and Mountain Warfare School (HAMWS), training on all sorts of hard-charging mountain warfare skills, including ascending and descending techniques, survival and rescue techniques, the use of special equipment, and cliff assault tactics.

And for the pièce de résistance, the Green Berets put their new skills and equipment to the test scaling Thorang Peak, a 20,200-foot mountain. At that altitude, there’s roughly half as much air pressure — and half as much oxygen — as at sea level.

“Marrying a deep expertise in mountain warfare tactics and mountaineering techniques with breathtaking terrain, the program succeeded in not only sharpening our capabilities but in forging strong bonds between new friends,” a detachment commander from the 1st Special Forces Group (Airborne) said, according to a Department of Defense release.

Nepal has more than 13,000 peaks higher than 6,000 meters, or about 19,700 feet. (Alaska’s Denali, the highest mountain in North America, is 20,310 feet high.) For the past 30 years, the Nepali Army’s HAMWS has hosted some 16 foreign students from 23 participating countries. This year, four total students from the US, Pakistan, and Bangladesh participated.

US Special Operations forces have trained in Nepal for years — including parachute jumps in the shadow of Mount Everest in the country’s Khumbu region.

It was on one of those deployments when disaster struck.

On April 25, 2015, a 7.8-magnitude earthquake devastated much of Nepal’s Himalayan landscape, killing about 9,000 people. Ancient monuments in the capital city of Kathmandu were turned to rubble. A massive avalanche at Mount Everest base camp killed 24 people, National Geographic reported.

After the 2015 earthquake, the deployed Army Green Berets ditched their training and went into real-world search and rescue mode. Among other efforts, they performed a helicopter rescue mission in the Himalayas, saving 30 stranded trekkers, including an American named Corey Ascolani.

US military personnel traveled to Nepal in 2017 for a humanitarian aid mission called Pacific Angel 17-4.

The US has another, more clandestine military connection to Nepal, dating back to the Cold War when the CIA supported Tibetan guerrillas based in Nepal’s Mustang region. Known as the Chushi Gangdruk, the CIA-backed irregular Tibetan force conducted cross-border raids against Chinese forces inside Tibet — a lingering point of contention between Beijing and Washington.