That time we took on the Navy’s hunter-killer dolphins 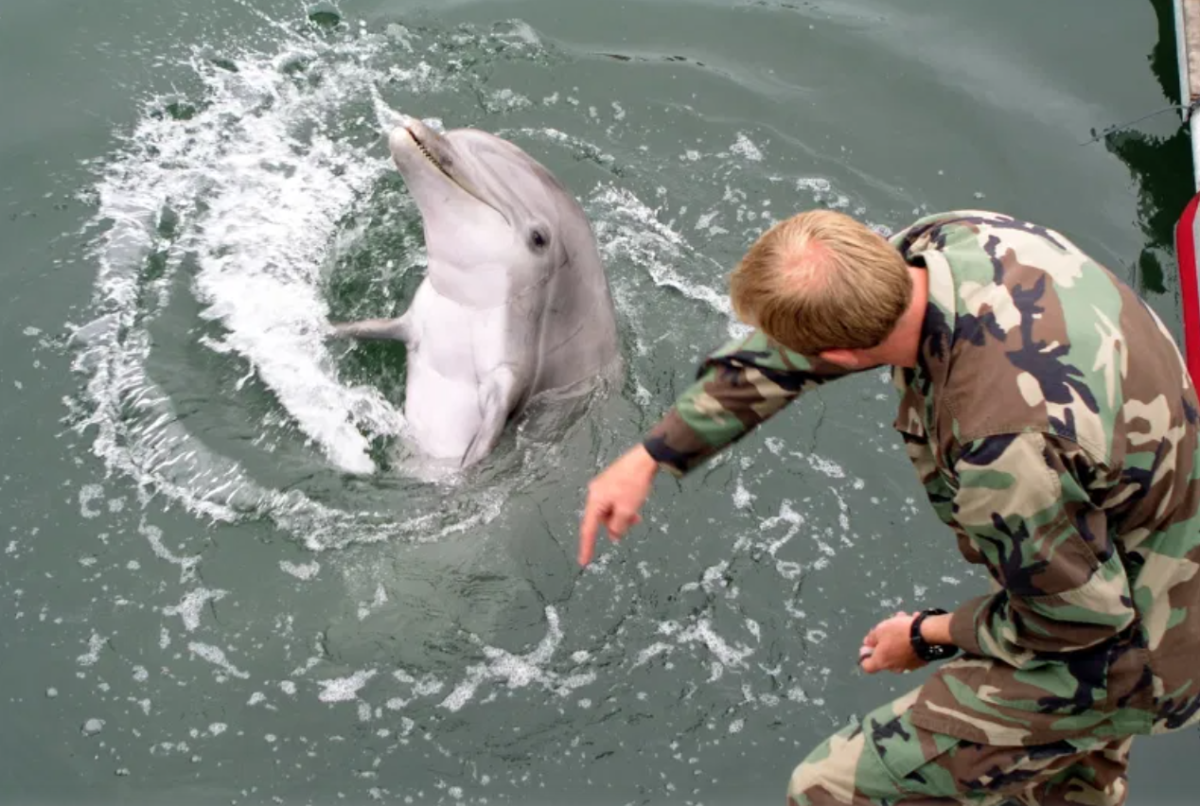 We formed the platoon into squads of seven men each; a senior NCO or officer was in charge of each squad. We trained for everything daily. Diving, free fall, and static line parachuting, demolition, beach surveys, shooting, rappelling, and surf work with boats kept us busy. A lot of what we trained to do was carry out common tasks, but we were testing new ideas regularly. The fast rope rappelling method to insert from hovering helicopters was new and fun. The IBS (Inflatable Boat Small) “rubber duck drop” had been perfected recently allowing us to jump our rubber boats with motors from aircraft at night. We were innovators and loving it.

A new task came our way when we were asked to plan a mission to attack the USS Lexington (CV-16) moored pier side in Pensacola, Florida. She was a World War II-vintage Essex Class aircraft carrier that would serve until her decommissioning in 1991. But for now, she was going to be guarded by the famed, and then-classified, dolphins that had been trained to detect or attack swimmers in the water. No one had ever successfully evaded them.

The bottlenose dolphins were outfitted with devices on their heads that could “kill” a swimmer when they slammed into them.  The training devices were not dangerous, but the idea of a large mammal swimming out of the dark and bumping aggressively into our wet-suited bodies was downright fearsome. We were expected to die as all others had done in the past. We were to be cannon fodder for the training element that ran this special force of water attack mammals.

There were no previous after-action reports that we could learn from, as all before had failed. Past platoons had tried launching from every direction around the target at once in the hope that one pair might make it in successfully, but this was the dolphins’ backyard and they were very fast and capable. So we began to brainstorm methods that might work. Our solutions focused on what we thought would keep us undetected by one of the most advanced sonar systems in the world — the dolphin.

One pair decided to try paddling on surfboards covered entirely with seaweed in order to look like floating trash. This was appealing to the swimmers as a dolphin attack might just hit the boards instead of their tender underbellies. The other swim pairs decided to make their approach in the rolling surf zone with fins and masks only. No scuba systems had ever worked as the bubbles were too easy to detect. Additionally, the quieter pure oxygen Dragger scuba systems, which produced no bubbles, had likewise already failed since they produced a detectable clicking sound upon inhalation and exhalation. We would also all need to be carrying the magnetic limpet mines that we would use to sink the carrier.

Our window of attack was to be from sunset to dawn. We chose a 0200 attack time in the hope of catching the boat handlers tired and off guard. Another factor that made the event more interesting was that all night the beach would be patrolled by roving guards with night vision scopes and beach capable vehicles. We could not get out of the water undetected. At 0200 we used our motorized launch craft to simulate putting multiple dive pairs in at various places around the target. Our boats had been cruising the area at a safe distance for a few hours, with stops and starts, to confuse the dolphin handlers. During that time, we could hear them giving whistle commands to the dolphins. Our real launches occurred close to shore.Read Next: The US Navy’s Deadly MK6 Attack Dolphin Program

As the seaweed-covered surfboard pair used their fins to move very slowly toward the target, just outside the breaking surf they passed a channel marker pole in the water. Undetected atop the pole was a large pelican. As the pair passed close by, the startled pelican launched noisily in the air and the already very nervous paddlers, fearing a sudden underwater attack, both screamed involuntarily and could be heard easily by all. They did not make it much further before a dolphin suddenly surfaced and squeaked a warning to the waiting handlers who zoomed in and threw simulated grenades at the embarrassed, and now eliminated, attackers. Now they knew we were attacking and one of our pairs was gone.

I was in the surf zone concentrating on staying in the froth of the breaking waves. I could hear engine noises as boat-borne handlers zoomed around. Our planning had included two essential concepts: First, we believed that the crashing surf would mask our presence by interfering with the dolphins’ sonar. (They were reported to always avoid breaking surf.) Second, if we could remain undetected by the beach patrols in the fluffy blackness of the rolling surf, we could then get to, and under, the barnacle-covered pier pilings and work our way slowly to the carrier. There were three long piers that jutted out into the harbor to which other boats and craft could tie up. We had been told that the dolphins would not come under the piers and risk their soft skin on the barnacles. We were counting on that.

The swim was exhausting as the surf tried to dash us repeatedly against the shallow bottom while we traversed over 1,000 yards to the pier area. One pair made it safely to the first pier and whispered to each other that perhaps they could save some time and energy by scooting across the open area between piers. They heard no area boats so took a chance by quietly and quickly swimming underwater across the short 30-yard distance between piers. Bad choice. They just managed to cover 20 yards when the dolphins hit them both. Two pairs down.

The two other pairs, including me and my swim buddy, stuck to the plan. We worked under the piers slowly toward the shore, across the gap under the pilings, and up along the next one until we made it past all three piers to the bow of the huge looming carrier. There were guards and vehicles moving above us, but we were invisible in the dark filthy waters under the piers. The carrier sat quietly with a draft of 35-feet. The seawater intakes had been shut down for the exercise, and the ship was entirely on shore power and water.

Four of us made it to the ship and, as briefed, dove down about 20 feet, planted our limpet mines on the metal hull, pulled the time-delayed fuses, and made it back safely under the pier. Separately, and quietly, we retraced our paths back along the pilings and worked back to the nearby surf zone. Once again, we stayed in the rolling, exhausting, noisy surf zone and swam slowly to our extraction point. It took over an hour but we were able to signal, undetected, for pickup by our launch vessels.

The crew was all smiles when it picked us up. Our limpet mines had detonated after the 30-minute time delay producing heavy red smoke that was seen by the pier patrols. Mission accomplished. One carrier sunk or severely damaged.

To this day the dolphin handlers swear we must have cheated!