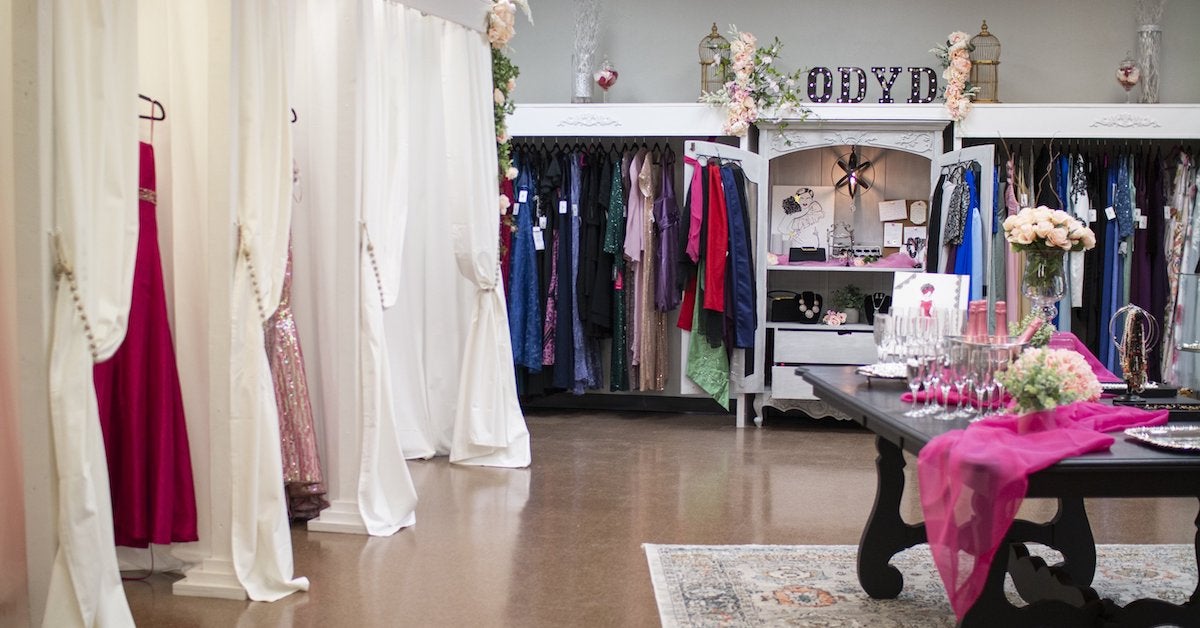 Two Army spouses joined forces at Fort Hood, Texas, to keep a military tradition alive, even as the pandemic continues to force closures.

As military balls face cancellations this year, even into 2021, Army spouses Maria Reed from Moving with the Military and Yvonne Coombes from Operation Deploy Your Dress (ODYD) pushed ahead with creating the ultimate dress shop at one of the Army’s largest installations.

ODYD is a non-profit organization that provides free dresses and other formal attire, including shoes and accessories, to service members and dependents. Located at military installations across the country, the boutique at Fort Hood is the eighth shop to open, with another opening at Fort Drum, New York, last month. More ODYD boutiques are set to open in 2021.

Moving with the Military is a home improvement and lifestyle television series dedicated to helping military families turn a house into a home. Reed, the creator of the series, also offers DIY tips and tricks to help create beautiful pieces for any personal space.

Together both Coombes and Reed designed and created a dress boutique for ODYD’s Ft. Hood location. While the two met in person at the annual Armed Forces Insurance Military Spouse of the Year Award ceremony in 2019, it was Christina Hendrex, the spouse of the III Corps Command Sergeant Major, who connected them.

“She knew what I was doing with Moving with the Military and my design background, and said, ‘Hey, would you be interested?’” Reed said.

Reed adds she jumped on the opportunity because she believes in the mission and Fort Hood is her home. From there, a collaboration was born.

The dress shop was set to open in April of 2020, but the pandemic set their timeline back.

“We tried our hardest to meet the cutoff [before the pandemic] but we just couldn’t,” Reed said.

The Fort Hood location officially opened in September. The entire process to create a beautiful boutique space wasn’t an easy one, especially with COVID-19 guidelines and protocol, on top of regular military protocol for using a space on an installation.

“When doing something like this on a military base, you can’t nail or drill anything into the walls,” Reed said. “So we had to be really creative on how to create a functional yet beautiful space inside an industrial space.”

And outside of creating a space that was pretty to look at in the big picture, and functional for what ODYD needed, Reed also wanted to focus on the details.

“I wanted [people] to walk in and feel like they were at a real dress boutique,” Reed said. “We had all these little details from the platforms for women to stand on to try on their dresses to gorgeous flowers draping over the corners of the walls that just added an elegant touch to everything.”

“Even though we were in this warehouse, it didn’t feel like that by the end,” she added.

“Even down to those minor little details — she got these perfect chairs for when people are sitting and waiting … with little bows on the back … everything was just perfect,” Coombes said.

The day of the opening was a special one for Coombes and Reed. It was almost a year-long process, from idea to fruition, and both felt that the end result was better than what they could have imagined.

“When we first started Operation Deploy Your Dress … it was just a lot of us trying to find out where to put these dresses. It was just racks in a room with … pop-up canopies that we would put curtains around.

“I had some wild imaginations of what [Reed] could do because I had seen her other stuff, but when I walked in [to the Fort Hood location], I was seriously floored. It’s like walking into … what you see on ‘Say Yes to the Dress.’ It’s beautiful,” Coombes said.

“I wanted [shoppers] to have a very different experience when walking in. I didn’t want them to feel like they were getting a ‘used’ dress. And that’s what happened — the first four shoppers walked in … and wow; it was really spectacular,” Reed said.

Both Reed and Coombes wanted to make each military family that visited the Fort Hood location to feel special and welcome. They enlisted help from the local community to foster that connection as well.

“Instead of making several larger dressing rooms, we made some smaller ones and one handicap accessible one,” Reed said.

“Everyone who worked on it did an amazing job … A local home store here called Homebase donated materials. Moving with the Military donated the decor, and the spouses club donated some items,” she said.

“We had a service member, who donated his Saturdays [and who is] a professional carpenter, come and help build each weekend. His family, my family; we worked every Saturday — cutting, painting, building  — until the space was done,” Reed said.

In the end, both Coombes and Reed couldn’t be happier with the space that was created at Fort Hood.

“We still love our other shops that have the big dressing rooms with all these spouses coming together to try on dresses, but the boutique [at Fort Hood] is just something else. Especially in a time when the spouses of Fort Hood need our support,” Coombes said.

“We want [ODYD] to be about the dresses, and about the love that has gone into deploying these dresses to military spouses,” Coombes said. “And Fort Hood exemplifies that.”

Just three days after opening, the location has served over 50 families.

“I know [Reed] helps one family at a time. But this is going to help so many families,” Coombes said.

Check out ODYD to find out if there is a location near you. Hours vary as each shop is run by volunteers.