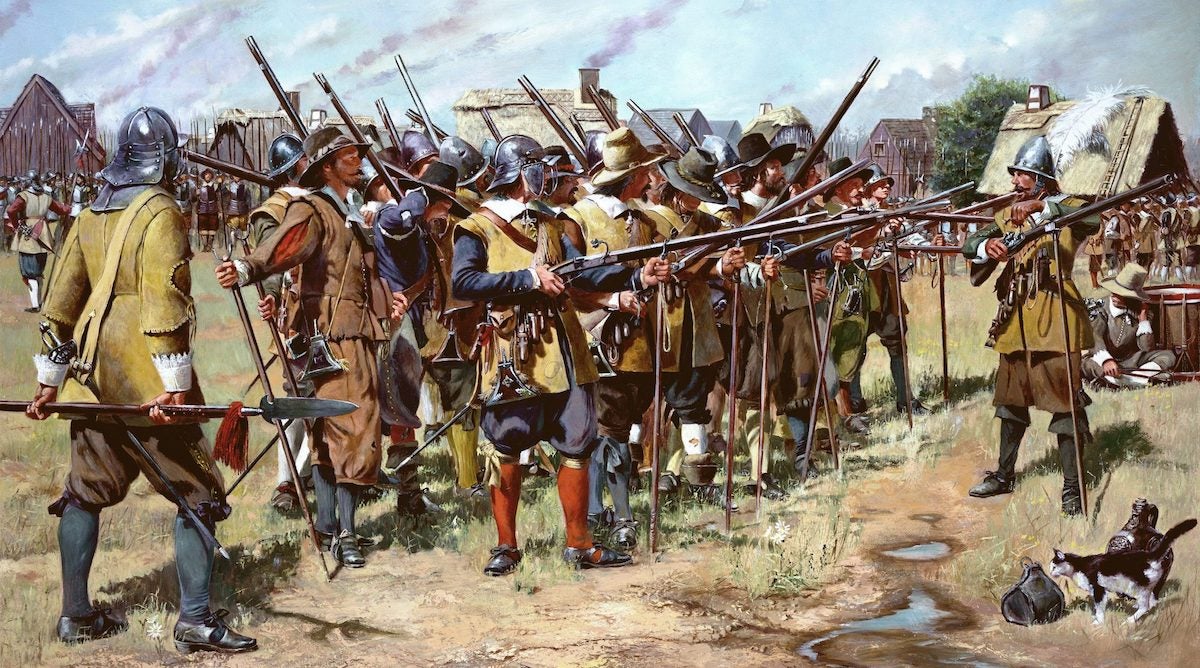 On the National Guard’s 384th birthday, we put together a list of four times it has saved the day.

Fast-forward 281 years from its birth to 1917. The entire National Guard was drafted into the US Army for service in World War I. This meant 17 divisions were off to Europe for the first time in the nation’s history. Among the most famous and battle hardened was the 30th “Old Hickory” Division, aptly named in honor of general and former President Andrew “Old Hickory” Jackson. He had ties to North Carolina, South Carolina, and Tennessee, the three states from which the initial draftees were pulled.

The Old Hickory Division earned more Medals of Honor — 12 — than any other division during the war. They were called other names out of respect for their ferocity in combat, including “The Workhorse of the Western Front” and “Roosevelt’s SS Troops,” the latter coinage by the German High Command.

In World War II, the men who made up the Old Hickory Division lived up to their name, serving 282 total days on the battlefield. The division had 3,435 soldiers killed in action and 12,960 wounded. They received six Medals of Honor, 65 Distinguished Service Crosses, 1,718 Silver Stars, 6,319 Bronze Stars, and 20,000 Purple Hearts. Some soldiers received the Purple Heart more than once.

The first tank-to-tank combat was fought by the 192nd Tank Battalion in the Philippines in 1941. First Lt. Benjamin Morin was the first tank commander to engage enemy forces in World War II. The battle was not a victorious one, as his M3 Stuart Tank was disabled and caught fire, forcing him and his men to surrender to the Japanese. He went on to endure three and a half years as a prisoner of war.

The Guard tanks of the 192nd Tank Battalion were later asked to hold their position for six hours to cover the retreat of forces to Bataan. They held the position for three days. There were 596 soldiers who answered the call of duty, and among them 325 were killed in combat, executed, died in POW camps, or were killed by American submarines aboard unmarked “Hell Ships” tasked with transporting POWs. The 194th Tank Battalion also saw action in the Philippines. Staff Sgt. Emil C. Morello earned the Silver Star for ramming his tank over an enemy roadblock, destroying a Japanese weapon position, and firing his main gun until his tank was disabled. His crew pretended to be dead and escaped on foot, only to be killed or captured in Bataan, where the rest of the battalion forces would later surrender.

When the US military must move heaven and earth in response to a crisis, they call the Air National Guard. Even before the unit was officially established alongside the Air Force in 1947, it was involved in the Border War between the US and Mexico. The 1st Aero Company, New York National Guard, mobilized in 1916 to provide assistance. The Air National Guard has earned a proud reputation, both in combat and for disaster relief.

Master Sgt. Keary Miller, a pararescueman assigned to the Kentucky Air Guard’s 123rd Special Tactics Squadron, was first awarded the Silver Star for bravery in the 17-hour gunfight during the Battle of Takur Ghar in Afghanistan. He provided lifesaving aid to a wounded helicopter pilot and set up multiple casualty collection points for Army Rangers on that snowy mountaintop in 2002. He also distributed ammunition to his teammates while under heavy enemy fire. In recent years, this battle has come under the microscope of the Defense Department to properly award these airmen, Rangers, and SEALs for their heroism that day. Miller’s Silver Star was upgraded to the Air Force Cross; John Chapman, an Air Force combat controller, and Britt Slabinsky, a Navy SEAL, each received the Medal of Honor.

In the midst of the Global War on Terror, the Air National Guard also responded to international and domestic crises such as the Indian Ocean tsunami and Hurricane Katrina in 2005, the earthquake in Haiti in 2010, the tsunami that hit Japan in 2011, and Hurricane Sandy in 2012. These are a few notable exploits, but the Air Guard has long provided aid and support as well as rescued countless victims in distress. The 210th Rescue Squadron of the Alaska Air National Guard, famously known as the “Guardians of the North,” are one of the busiest search and rescue units in the world.

We may not think of this immediately because we are currently living through it, but the National Guard has saved the day countless times this year. They remain on the front lines to provide aid during the current pandemic, entering the battle against COVID-19 in March. The Tennessee National Guard flew 500,000 swabs to Memphis to resupply COVID-19 test kits, and the New York National Guard helped with distribution of food in hard-hit areas.

They have also deployed to suppress wildfires in the Pacific Northwest. In September, a 1,000-member force was sent to Oregon to give assistance. California National Guard aircrew members responsible for rescuing 242 people from the Creek Fire were each awarded the Distinguished Flying Cross for heroism. They flew in Black Hawk and Chinook helicopters on three daring flights to carry the trapped campers to safety.

In addition to the COVID-19 pandemic and the wildfires in 2020, the National Guard has also served to support public safety amid the civil unrest across the country, including in Minneapolis after the death of George Floyd. The year isn’t over yet, but the National Guard is equipped to handle any problem that may arise with the same professionalism and dedication it has exhibited thus far.