Organization to honor 174 service women who paid the ultimate sacrifice 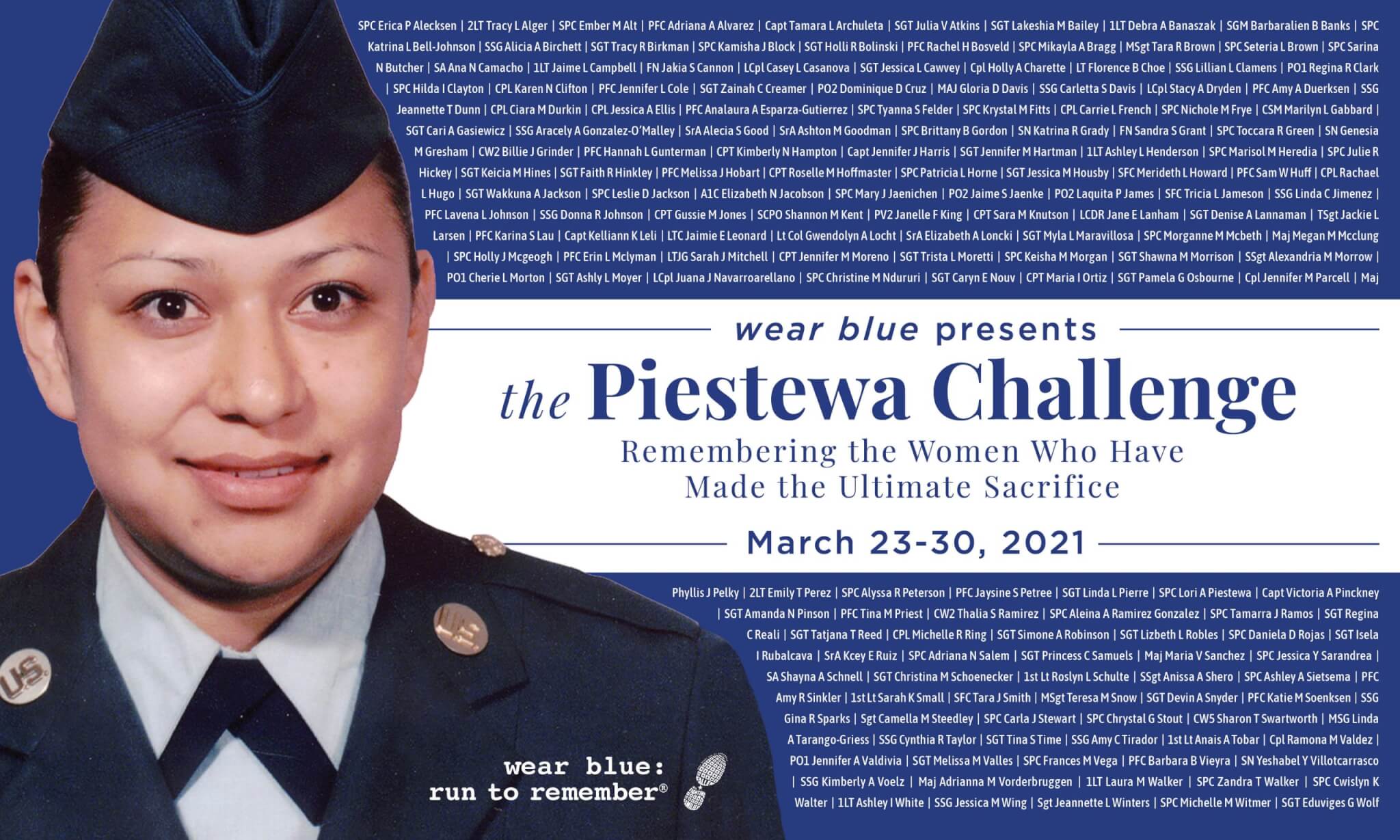 One hundred seventy-four miles may sound like a lot of ground to cover in one week, but to Lisa Hallett it’s minuscule compared to the 174 women who lost their lives in overseas combat since Sept. 11, 2001.

“I think women in service show an uncommon courage,” said Hallett, co-founder and executive director of wear blue: run to remember — a nonprofit dedicated to honoring the sacrifice of U.S. military members. “Their willingness to step into a man’s world, lead with conviction and have an impact on the success of our armed forces — I’m so in awe of that bravery.”

In conjunction with Women’s History Month and the 399,458 current-serving military women, Hallett and wear blue’s staff launched the inaugural Piestewa Challenge — a worldwide collective effort to pay tribute to the nation’s 174 fallen women. Kicking off Tuesday, March 23, the challenge invites groups of four to eight people to jointly run, walk, swim, kayak, bike or any other motion in completing 174 total team miles by March 30.

“Any movement counts!” Hallett said. “There is so much we can’t control in our lives, especially right now, but we can always do something intentional for ourselves, our communities and these women.”

The Piestewa Challenge is named after Army Spc. Lori Piestewa, the first Native American service member to be killed in combat on foreign soil and the first military woman to be killed in Iraq. March 23, the day the challenge launches, is the 18th anniversary of her passing in Nasiriyah. The symbolic starting line begins near Piestewa Peak in Arizona and ends 174 miles later — a location not far from Piestewa’s hometown of Tuba City on Navajo Nation.

Anyone — man, woman or child — can participate in any location. Hallett, herself a Gold Star wife after losing her husband John in Afghanistan in 2009, recommends joining the challenge not to check off another item on a to-do list, but as “a gift to ourselves and each other.”

“Here is a really simple way we can come together and connect as a military family,” she said. “When we remember the past, say these women’s names, we show the present how we will care for each other in the good and the bad in the future.”

The Piestewa Challenge is free and has already registered more than 1,500 athletes, although Hallett, an ultramarathon runner and Ironman participant, hopes for 5,000. Participants can join teams with names like “Hot Steppers” and “Wild Wicked Women” and log miles through Racery, a virtual race platform. Registration is available online.

The challenge is more than just lonely exercising. Athletes can begin the 174 miles with the “Piestewa Challenge National Circle of Remembrance” online Tuesday morning. The virtual ceremony will specifically honor Piestewa with a blessing from the Hopi people, her tribe, as well as reading aloud the 173 names of her fallen sisters. Additionally, wear blue will send emails throughout the week, each containing stories of soldiers, airmen, Marines, and sailors killed over the last two decades.

Many of the women’s family members are playing active roles in the challenge.

“It means so much that their loved one is not forgotten and that they do not remember alone,” Hallett said. “These women’s families have, in many ways, carried the weight of their service, and there is so much inspiration in witnessing each family’s courage and how they persevere.”

Hallett and her staff will be running on team “Run, Honor, Belong.” With each mile, she says, they will be thinking of each woman in the club of 174.

“This is an opportunity for the nation to turn the words, ‘Thank you for your service’ into tangible, meaningful action,” she said. “We’re going to carry with intention their legacies in our steps.”