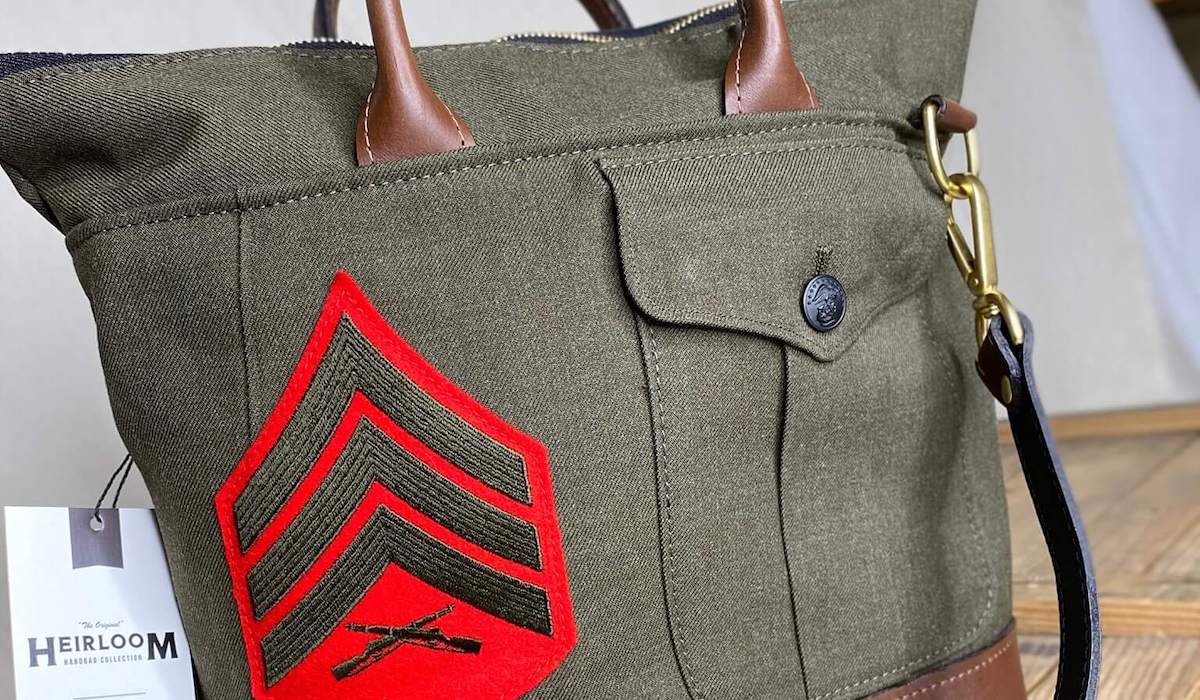 There are some things we can’t bear to part with. This holds especially true of items with sentimental value, those which spark memories or are a piece of family history. However, those items often remain tucked away in a box, a chest of drawers, attic or basement as we carry them from duty station to duty station.

It’s those special items that inspired Cameron Cruse and Lisa Bradley, co-founders of the military-spouse owned handbag company R. Riveter, to come up with its one-of-a-kind Heirloom Collection earlier this year.

“Most of us have things in our homes that have been passed down from generation to generation and mean a great deal to us but we struggle to find a way to showcase them every day,” Bradley said.

The R. Riveter project allows customers to transform their well-loved and sentimental materials like old military uniforms, jackets and duffle bags into one-of-a-kind handbags and accessories.

For Mary Schmid Carter, the launch of the Heirloom Collection was fortuitous after finding her 93-year-old grandfather’s military uniform from his time serving during World War II.

“We’d always heard about his time serving in the South Pacific, and what else would you do with a uniform that’s at least 70 years old?” she said.

Charles Feigl received his draft letter in January of 1944, just one month after his 18th birthday. He enlisted in the Navy and packed his bags for training. After learning morse code, ship steering and how to prepare nautical charts, the young man from Buffalo, N.Y. boarded a newly commissioned ship on a journey to see more of the world than he could have ever imagined.

“Our Heirloom Collection is a great way to honor our veterans and create something truly unique that is useful and beautiful,” Cruse said.

Crafted by military spouses like the rest of R. Riveter’s handbags and accessories, pieces created through the Heirloom Project range in price between $65-$500 depending on the size of the product and materials used.

When she took the uniform into R. Riveter’s flagship store in Southern Pines, N.C., the R. Riveter team discovered it was a Coast Guard uniform, even though Feigl served in the Navy.

Turns out, that discovery was part of Feigl’s story.

After the war was over in 1945, he made the long journey home from the Pacific to be discharged. On his last night of active duty service, Feigl was assigned an overnight watch on an empty English ship in New York Harbor. He returned to base the next morning to discover his belongings ransacked. His uniform, badges and memorabilia were all stolen.

“He had to buy a uniform just to be discharged,” Schmid Carter said.

Her goal was to have handbags made for each of the women on that side of the family, including her mother, aunts and cousins.

“I knew it would be a challenge to get ten handbags made from just one uniform, but the team at R. Riveter was determined to make it happen,” she added.

Schmid Carter expects the handbags to arrive just in time for Christmas.

“I think it will be a really special moment, an opportunity to honor [Feigl] while we still have him here. Rather than his uniform collecting dust, each of us can carry a piece of our family history with us,” said Schmid Carter.

Those interested in creating their own heirloom handbags can visit the R. Riveter flagship store in Southern Pines, or take a style survey on the R. Riveter website. There, the process is simple. Just upload photos of the item(s) and begin creating a one-of-a-kind piece. Customers select the leather color used, size of bags, and what aspects of the material they provide they want to be featured in their customized heirloom bag. The average bag takes approximately 6-10 weeks to craft.

Schmid Carter raves about the experience.

“It was wonderful. If I can get my hands on my other grandfather’s military uniform, I’d love to have handbags created for the other side of my family.”