Terms only Marines will understand - We Are The Mighty 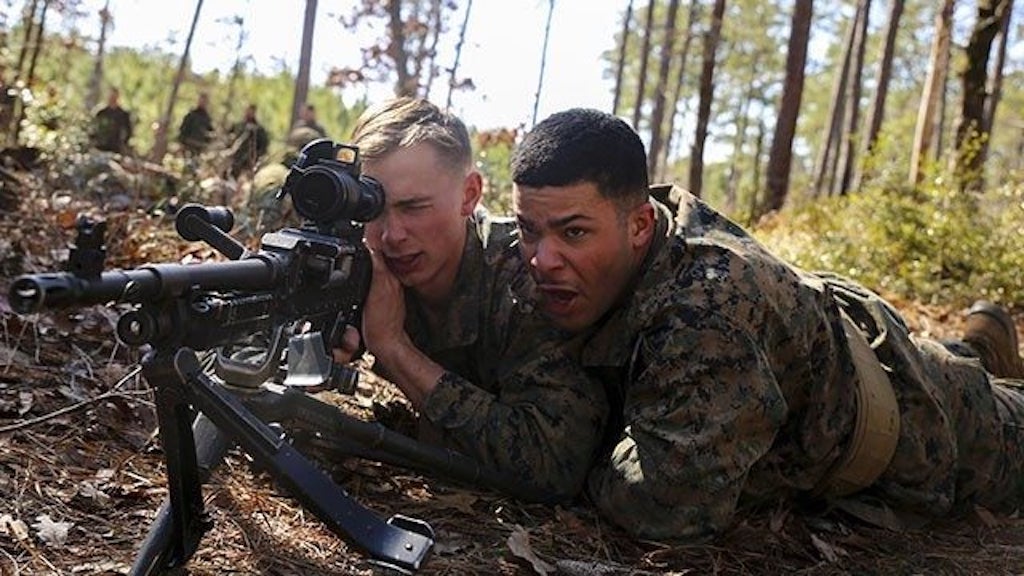 Marines speak a slightly-different language than the rest of the United States. While everyone in the Corps speaks and uses English most of the time, there’s another layer of terminology added on top which is uniquely Marine. If you are around Marines long enough, you’ll hear someone being called a “boot” or dozens of them screaming out “yut.” This is what it all means.

Short for “Oohrah,” a Marine greeting or expression of enthusiasm similar to the Army’s “Hooah” or the Navy’s “Hooyah.” Rah, however, is a bit more versatile. You could be agreeing with someone, by saying “rah.” You could be excited about going on a mission by exclaiming, “Rah!” Or you could be asking the platoon if everyone understands, “rah?”

It’s like the Marine version of the mobster’s “fuggaddaboutit.”

This is an even more shortened-down version of “rah.” But it’s most often used as a lazy-man’s version of agreement. Your platoon sergeant may ask if everyone understands the plan of the day, to which everyone will respond with “Errrr.” Translation: Yeah Gunny, we got it.

Arguably used more often than “Oohrah” by junior Marines to express enthusiasm. Instead of “oohrah,” Marines will often just say “yut” when in the presence of motivational speeches and/or talk of blowing things up.

A pejorative term for a new Marine fresh out of boot camp. The term’s origin apparently comes from Vietnam, as an acronym meaning “beginning of one’s tour.” New Marines joining a unit are usually referred to as “boots” until they go on a deployment or have at least a year or two in the Corps. Especially among post-9/11 era infantry Marines however, you are pretty much a “boot” until you’ve been to combat.

This is what Marines call guard duty. While sentries may well have been looking for fires in the past, Marines pulling fire watch nowadays can be walking around a barracks aimlessly or standing their shift behind the machine-gun in Afghanistan.

Since this is one of the most important duties of recruits at boot camp, senior Marines will often say boots only have the “fire watch ribbon,” a pejorative for the National Defense Service Medal that everyone gets.

Acronym often used in response to someone complaining. “Hey dude, SITFU.” That means suck it the f— up. You can also just ask if they have a straw. Most Marines will understand the reference.

An unofficial motto of Marines that means exactly what you think it means. As the smaller service — and with much less funding than the Army — Marines have an attitude of doing more with less. “Improvise, adapt, and overcome” sums it all up.

The nickname for the fifth Commandant of the Marine Corps, Archibald Henderson, who served in the Marine Corps for 54 years. But most of the time when this phrase is used, it’s in referring to the oldest guy in the unit. Common usage: “Hey grand old man, what was it like serving with Jesus?”

Sure, it can literally mean kill. But in Marine-speak, kill can mean “yes, I understand,” “hell yeah,” or “let’s do this.” Marines will even say “kill” as a half-joking version of hello. Using this one outside of the Corps can get plenty of strange looks, so don’t try this one on your local college campus.

The term Marines use for slacking off. Soldiers call this behavior “shamming,” but Marines can “skate” out of boring tasks by avoiding them somehow, usually by getting a dental appointment. And of course, S-K-A-T-E is even an acronym: S: Stay out of trouble / K: Keep a low profile / A: Avoid higher-ups / T: Take your time / E: Enjoy yourself.

This is often used sarcastically to rib a non-commissioned officer when one of his or her Marines gets in trouble. “So, two guys from your squad got caught drinking in Tijuana then got arrested at the border. Direct reflection of leadership, right corporal?”

What some Marines will call an extremely gung-ho coworker. It’s not a compliment.

Non-judicial punishment — also known as the Article 15 — is what Marines can face if they break the rules, but a commander doesn’t feel it’s bad enough to warrant a court martial. While the military justice system is the same across branches, the Marines refer to it as an NJP. If you walk out of your commanding officer’s door going down a rank or losing some pay, you probably got “ninja punched.”

The John Doe of the Marine Corps. He’s the screw-up and the guy always getting in trouble. The Marine who is lost all the time. The anonymous service-member who stands as the example of what not to do. This term will usually be brought up by a senior leader, like: “Hey gents, you are all doing good things. Be safe out there this weekend, but don’t let me get a phone call about Pvt. Schmuckatelli getting all drunk out at the club and getting into trouble, good to go?”

Another play on “Semper Fidelis,” which often gets shortened to “Semper Fi.” While the motto means “Always Faithful” and brings up teamwork and esprit de corps, “Semper I” is used when a Marine goes off and does their own thing without thinking of others. Sometimes used as “Semper I, f— the other guy.”

Lance Corporal, or E-3, is a Marine rank that comes with more responsibility than a private or private first class, but is not a non-commissioned officer. In order for Marines to pick up the next rank of corporal, they need to have a high-enough “cutting score” to be promoted. If they get out after their four-year enlistment at Lance Corporal, they are a “Terminal Lance,” which can be bad or a point of pride, depending on who you talk to. “Terminal Lance” is also a hugely-popular online comic strip started by Maximilian Uriarte.

Some Marines need some help in understanding how to complete a task. When this happens, a leader may want to break it down into baby steps and explain it very slowly. You know, just like Barney.

These are what Marines call the glasses you get issued at boot camp, or “boot camp glasses.” Most know them by their nickname, which is “birth control glasses,” because well, you probably don’t want to hit the club wearing these things.

The source of most rumors that go around the Corps. Since lance corporals make up a large part of the Corps, the underground is often responsible for passing word of what’s going on, or completely made-up falsehoods.

This phrase comes out when a Marine does something for a good reason, but things turn out awful. A great example would be when your platoon commander says he knows a shortcut through the woods, then he gets the platoon completely lost. “Good initiative, bad judgment, sir.” Next time, let’s stick to the planned route.

Traditionally run on Thursday, the one night of the week Marines usually dread. No, it’s not the field day of play and sports like back in school. It’s the term used to describe the weekly ritual of cleaning rooms in the barracks. Field day cleaning involves moving furniture (often completely outside of the room), dusting top-to-bottom, vacuuming, scrubbing, and waxing floors.

“Basically Field day is just another tool used by Marine Corps leadership to piss off and demoralize Marines on a weekly basis,” reads the top definition in Urban Dictionary. If your first sergeant finds a speck of dust anywhere, you’re screwed.

What would you add to the list? Let us know in the comments.