This is why certain Marine units can wear the French Fourragere 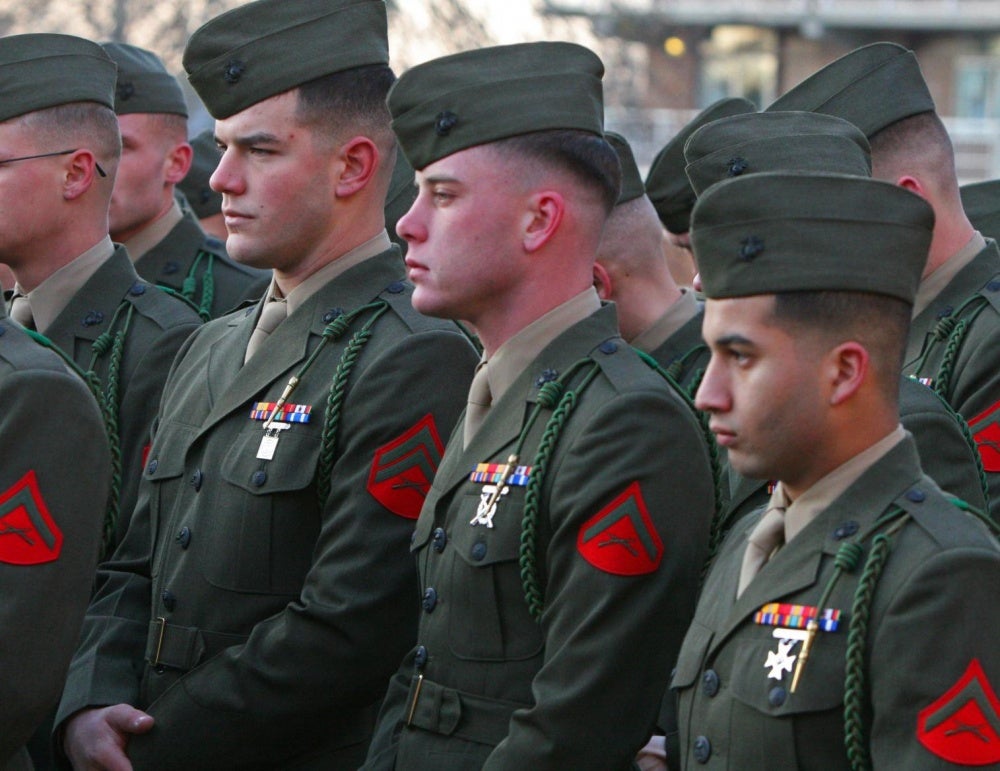 The German military is much more formidable at this point in the war. The central powers found new wind in their sails when Russians surrendered. The consequence of Russia’s capitulation meant the German army could consolidate and administer a knockout blow to French and English. So, they tried. The Spring Offensive barreled towards the fatigued allies. The fresh 2nd infantry division and the 5th and 6th Marine regiment are the only thing standing between German victory.

You train how you fight

The Marine Corps was a completely volunteer force and the strict standards paid off at Belleau Wood. They came out of recruit training as disciplined, highly skilled marksmen. The Corps focused on methodically ensuring Marines were prepared against a larger enemy force. Although the Marines did have mortars, machine guns and 37mm portable heavy guns, the buildup envision by Major General John A. Lejeune had not reached fruition yet. The Marines marching toward the Germans did not have the support by fire elements we expect today. Communication was limited to wire telephones, messengers and carrier pigeons. The restrictions affected the response time to the shifting battlefield causing more disadvantages. Unless it was planned prior to the battle, one had to send a runner to call for fire. Regardless, the Marines trained for any situation: adapt and tackle any obstacle to achieve victory.

Retreat, Hell! We just got here!

Captain Lloyd W. Williams famously retorted when a French Colonel who ordered him to retreat. Captain William’s successful, but costly assault routed the enemy. He was mortally wounded at Belleau Wood on June 11, 1918. The Captain refused medical care so his men could be treated first. Later that day, during an artillery and gas attack, he succumbed to his wounds on the operating table. He was posthumously awarded the Distinguished Service Cross.

Don’t bother with me. Take care of my good men.

Belleau Wood forged some of the hardest Marines to every fix a bayonet. Four officers from this battle would command troops at Iwo Jima in the second World War. Three Medals of Honor and 143 Navy Crosses of Marines charging machine gun nests, artillery, gas, and literally beating the enemy to death. The French Fourragere is a symbol of American heroism in the face of danger. The 5th and 6th Marine regiments did not waiver against a well-armed, reinforced enemy. Napoleon awarded his troops the Fourragere for displaying gallantry in battle. The French would award the two regiments, not once, but twice the distinguished award.

This decoration is awarded by the French Army to organizations receiving more than two citations as a unit for gallant achievement in action. For each citation a decoration, usually the Croix de Guerre,is pinned to the colors of that organization. Many regiments in the American Expeditionary Forces had their colors decorated by the French Government, and several smaller units in those regiments have received the required member of citations for the fourragere…The Marine citations are for gallant conduct in face of the enemy at Belleau Wood and Bouresches, in the Chateau-Thierry sector, and in the advance of Soissons on the morning of July 18.

Another unit that, relatively recently, now rates to wear the French Fourragere is 1st Battalion, 8th Marine Regiment. The Commandant of the Marine Corps’ Force Design 6th Marine regiment has absorbed 1/8 and on awarded the French Fourragere to the unit on November 25, 2020. While the Marine Corps continues to adapt to modern polices, it will always pay homage to the those that came before us.