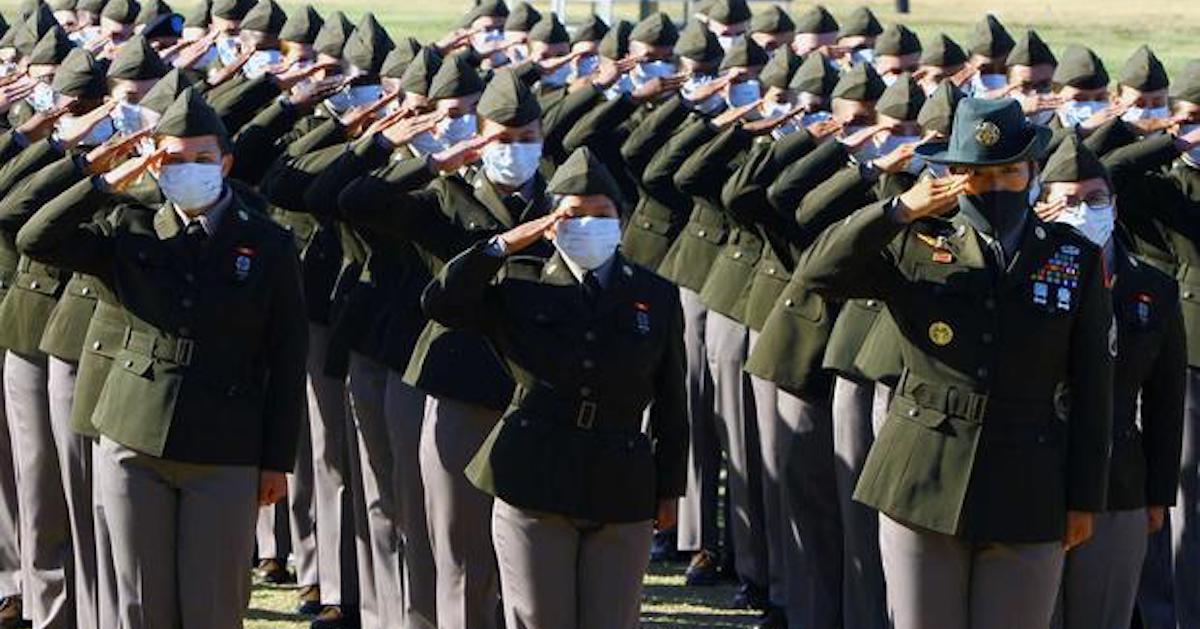 After completing the 10-week BCT course, about 200 soldiers from A Battery, 1st Battalion, 79th Field Artillery, which falls under the 434th Field Artillery Brigade, stood at attention at the Nov. 16 graduation ceremony dressed in the new Army Green Service Uniform, officials said in a release.

The significance of the iconic uniform — a throwback to the “Greatest Generation’s” Pinks and Greens — was not lost on fledgling soldiers like Pvt. Rebeca Beaird, who recalled what she thought when she was first issued the new uniform.

“A lot of us were thinking: ‘Oh, Captain America, like yeah! We get to be there,'” Beaird said in the release, possibly referring to the popular 2011 movie “Captain America: The First Avenger,” which showed actor Chris Evans dressed in his Pinks and Greens uniform during WWII.

“Soldiers who wear this uniform are going to be honored to wear them. Veterans who wore them will be happy to see us bring it back.”

“Now you, as our next great generation, are among one of the first in our United States Army to wear one of the most admired and recognizable uniforms in our history as it is being reinstituted to honor our heritage.”

The Fort Sill graduates were among the first recruits to receive the AGSU in October. Fort Leonard Wood, Missouri; Fort Benning, Georgia; and Fort Jackson, South Carolina are the next bases in line for trainees to begin receiving the AGSU, according to Army officials.

Army recruiters and drill sergeants were the first to begin receiving the new uniform, because the two groups are considered the face of the Army, officials have said.

Staff Sgt. Hayon Ju, a drill sergeant with 1-79th, said she “loved the practicality” of the new uniform.

“They’re a lot easier for females to set up our ribbons and badges,” Ju said.

During its development, the Army formed a special, all-female panel to speak for the needs of female soldiers. One of the recommendations was to have pants as the default option instead of the traditional skirt that was issued in the past.

Army senior leaders approved the new uniform for everyday wear in late 2018 as a replacement for the blue Army Service Uniform (ASU) after deciding that it is often too formal for everyday business use.

Soldiers who own a set of the ASU can continue to wear it for formal occasions.

Col. Daniel Blackmon, 434th Field Artillery Brigade commander, said the AGSU is special for him because his father and grandfather served in the Army and wore similar uniforms.

Blackmon said he has heard a lot of positive comments when wearing his AGSU — “one, the history, and two, just the way it looks.”

Sgt. 1st Class Antrell Bender, a senior drill sergeant at 1-79, said the new soldiers don’t have anything to compare the AGSU to since this is their first dress uniform.

For Bender, the AGSU is his third dress uniform of his career. “I’ve been in since we had the green dress uniform, then we switched over to the ASUs,” he said.

Soldiers are not required to own the AGSU until Oct. 1, 2027, an extended phase-in period intended to give enlisted soldiers more time to save up their annual clothing allowance to buy the new uniform.

The Army and Air Force Exchange Service, however, is moving ahead with plans to supply the new uniform through a wave-based rollout approach. The majority of AAFES locations within the U.S. are expected to have the new uniform by December. Stores in Alaska, Europe, Japan and South Korea, along with National Guard and Reserve military clothing locations, should have a supply of uniforms by February 2021.