From Homeless to Celeb Fitness Trainer - We Are The Mighty 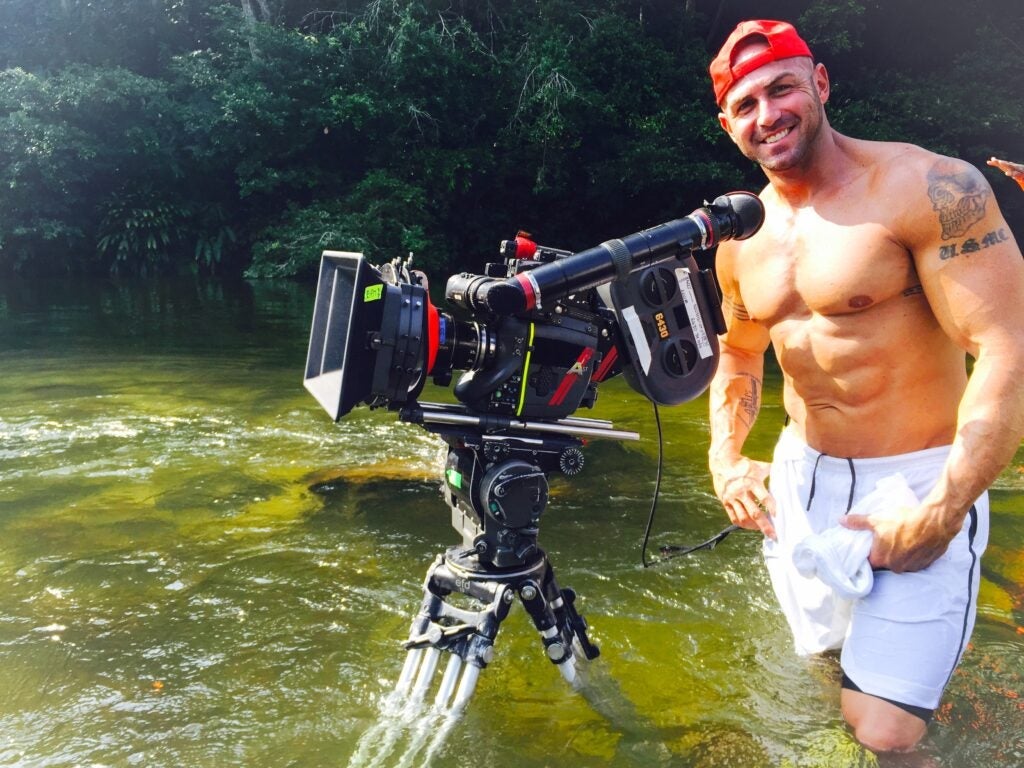 Aaron Williamson knows a thing or two about transforming. Although this body-builder is known for his fitness expertise, acting and incredible stunt work – it would take an extraordinary amount of dedication and “no quit” mentality to get there. Again and again.

The Marine Corps saved his life.

When his step-father and mother went through a divorce while he was just 11 years old, it had a devastating impact. “I got really depressed and turned inward. I went to a pretty shitty middle school and got picked on. There was a group of thugs who just always wanted to harass me. So, I got my ass kicked quite a bit. Then just one day I started fighting back,” Williamson explained. “By 7th grade, I was hanging out with guys who were on house arrest and selling drugs. I overdosed on cocaine and speed and almost died.”

His family wasn’t sure what to do and he bounced around homes. When he was a freshman in high school they admitted him into a rehabilitation center. Williamson was in the process of being placed in foster care when his mother made the decision to take him back home to Daytona Beach and put him in a private school.

“I did okay for the rest of the rest of my high school year. The problem was, I just had no direction, no responsibility, no respect for authority and didn’t have I couldn’t see a future past high school. I decided that I was going to join the military, specifically the Marines because in my mind, they were the best of the best,” he shared. “I call the Marine Corps my salvation because I went from being this broken kid to meritoriously promoted, squad leader, team leader, platoon guide and ended up having a couple of special duties. One of them was becoming the section leader for the Marine Corps body bearers in Washington, D.C. From there I went on to become part of the personal security for the Chairman of the Joint Chiefs of Staff, General Peter Pace, and his wife.”

Williamson served on active-duty as a Marine from 1998 to 2005 when he made the decision to get out and go into contracting work. “I had the opportunity to be a part of a technological advancement with biometrics so I was thinking about long term growth in a new field which is why I did it,” he shared. “I was given this opportunity by General Pace’s Executive Assistant, Colonel Rich Diddams.”

“During this time I was going through a bad divorce and decided to come back stateside in 2009 because it had just gotten too dangerous in Iraq. But the job I was supposed to have in New Orleans got cut,” Williamson shared.

He was frank in admitting he had some dark moments and contemplated ending his life.

“Trying to integrate into civilian life or just normal society was extremely difficult for me. Having gone from doing all the amazing things I did over the course of my Marine Corps career to all of a sudden being in New Orleans where I didn’t know anybody and I’m living in my car. It wasn’t a good chapter in my life,” he shared. “I was ready to go back overseas and just accept the contracting work was going to be the rest of my life for however long. But instead of doing that, my friends and family encouraged me to do something in fitness because it’s really what I loved.”

Though couch surfing at the time, he earned his certification as a personal trainer. Four months into working out at a 24 hour gym in New Orleans, Williamson met Zac Efron.

“He was doing a movie called the Lucky One, where he plays a Marine Iraq veteran. I became his technical adviser. After that, I realized that there was a film and TV presence in Louisiana, specifically in New Orleans. I started to try and get involved in it,” he said. It wasn’t long before his name was recognizable. “Everyone knew who I was and next thing I knew, I was training everybody. The Rock, Stallone, all these A-list guys were now my clients, which brought me into a whole new realm of work because now I had directors and producers coming to me from all the notoriety.”

In 2015 he made the move to Los Angeles to dive deeper into training the stars, acting and stunt work. One of his favorite roles was being a part of the Netflix film, Bright, starring Will Smith. “Acting for me became very therapeutic and dealing with a lot of these repressed emotions I had from being in the environment I was in for so long,” Williamson said.

Though known for his incredible muscular build and training ability – he does have a guilty pleasure: pizza. “I could eat it every day,” Williamson laughed. And despite the perception of him being larger than life, he’s a quiet introvert – preferring to stay in rather than go out.

A move to Las Vegas away from the craziness of LA in early 2020 was another high point for him. Or so he thought. The COVID-19 pandemic would bring his entire career – in acting and in fitness – screeching to a halt. It was a hard year.

But he didn’t quit.  “I finally decided it’s time to turn everything I had into something so I started working with a business coach to help me grow my brand into what it is now,” he shared. “Today, I am running Aaron Williamson Fitness. I’ve got clients in 36 different countries and I’m still doing film and TV work but I’m doing it quietly and strategically.”

Though he’s transformed himself time and time again, refusing to give up – it’s still a challenge every day for Williamson. His continued healing is rooted in fitness and clean eating, which helps recenter him during those hard days.

“Even to this day, I still have my dark moments that I have to fight through. And for me – everything about my life is rooted in purpose,” he said.  “I made it back, whereas a lot of people I know did not. So I feel I have a sense of responsibility to do something with my life and never take the easy way out.”

To learn more about this badass Marine veteran, click here.