The Medal of Honor: Above and Beyond Gallery drops players into history - We Are The Mighty

The Medal of Honor: Above and Beyond Gallery drops players into history 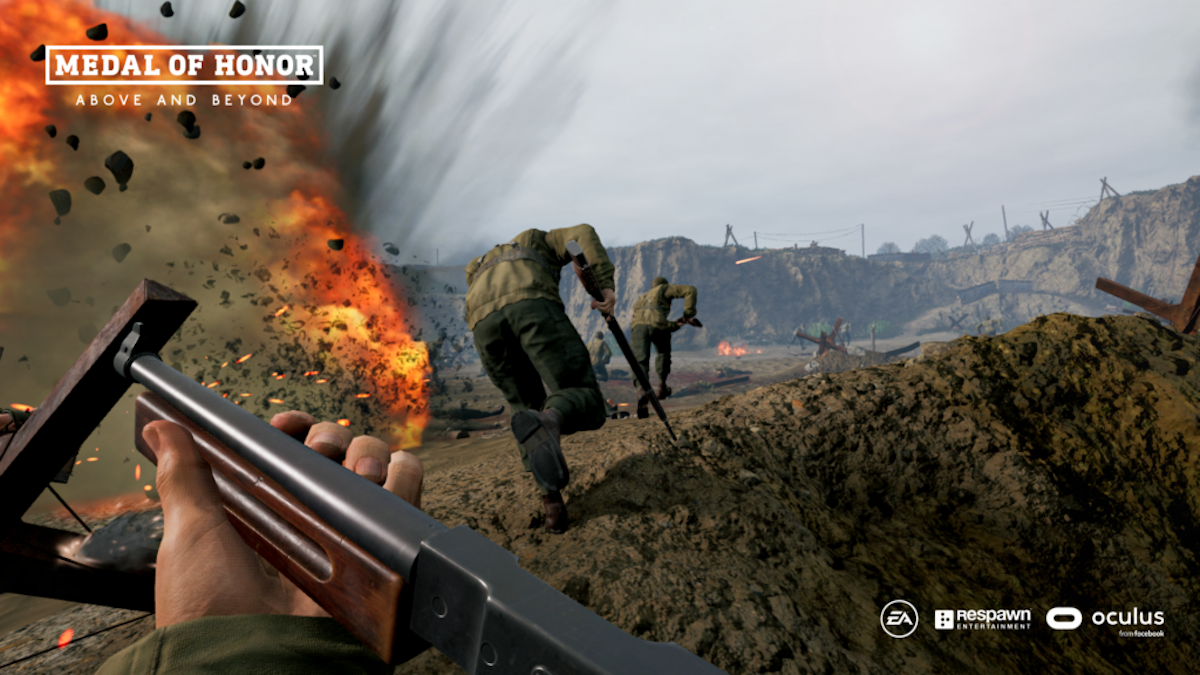 With the release of EA’s Medal of Honor: Above and Beyond, gamers have their first dedicated WWII virtual reality experience from a AAA studio. The game is the first release from the Medal of Honor franchise since Medal of Honor: Warfighter in 2012. Set in the European theater, Above and Beyond has players take on the role of an OSS agent fighting alongside the French Resistance against the Nazis in its single-player campaign. Played entirely in VR on either the Oculus Rift or Steam VR, Above and Beyond also includes traditional player vs. player competitive multiplayer and a survival mode. However, the game’s signature feature is its Gallery mode.

A longstanding inclusion with Medal of Honor games, the Gallery mode provides players with insight on the real-life soldiers and their stories that inspired the game. As players progress in the single-player story, documentaries in the Gallery are unlocked. “The goal of Medal of Honor is to be grounded and emotionally authentic. To be as true as we can to the people who actually fought in it and lived in it” said Peter Hirschmann, game director of Medal of Honor: Above and Beyond, “The goal is to tell and show as much truth as possible and let people get the tiniest of glimpses of what it must’ve been like.”

Hirschmann is no stranger to telling stories as he wrote and produced the groundbreaking original 1999 Medal of Honor game. He brought on board Emmy Award-winning filmmaker Anthony Giacchino to produce the Gallery mode. Giacchino, who is well-known for his WWII documentaries featured on The History Channel, sought to bring a human dimension to the game. Over 16 million Americans served in WWII. In 2019, the VA estimated that less than 390,000 were still alive and nearly 300 died every day. With the greatest generation fading away, Giacchino wanted, “for people to hear their stories before it’s too late.” Developer Respawn partnered with Honor Flight to bring WWII veterans to the locations of historic events that they took part in to conduct interviews.

In the Gallery mode, and through the power of VR, players will be able to sit next to these veterans and hear them tell their stories. They will walk alongside them on the battlefields that they fought through all those years ago. “It’s an amazing tool for transporting people into the stories that we’re telling,” Giacchino said of VR. “You’ll be able to go to Peenemünde where the V2 rocket program was, or Omaha Beach, parts of the world you’d otherwise never get to see.”

Above and Beyond offers players an engaging gaming experience, but an even more powerful and emotionally impactful story-telling experience. While new technology like VR will inevitably become antiquated and games like Above and Beyond difficult to play, its Gallery mode serves as a timeless historical record and testament to the veterans of the Second World War. Giacchino has confirmed that the team is working on a way to bring the Gallery mode to a wider and more mainstream audience without the need for a VR headset and gaming PC. “The Gallery will forever be the thing that lives on, a hundred years from now.”