Watch: Charles Coolidge, who charged at German tanks with a bazooka and grenades, gets Medal of Honor in vintage footage - We Are The Mighty

Watch: Charles Coolidge, who charged at German tanks with a bazooka and grenades, gets Medal of Honor in vintage footage 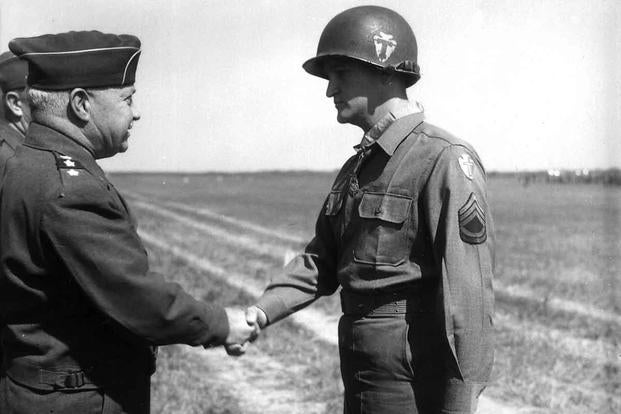 Tech. Sgt. Charles Coolidge, who fought the Nazis throughout Europe and North Africa with the Army‘s 36th Infantry Division, earned the Medal of Honor for his courage during a fierce forest battle in France in 1944.

As the nation mourns the loss of Coolidge, who died last week at the age of 99, you can now see the moment he received the nation’s highest honor for valor.

The Defense Department on Sunday reposted archival video of the June 18, 1945, award ceremony near Dornstadt, Germany. The video shows then-Lt. Gen. Wade Haislip, who commanded the Army’s XV Corps in Western Europe and after the war served as vice chief of staff of the Army, presenting the Medal of Honor to Coolidge.

Read Next: Officer Accused of Force in Stop of Black Army Officer Fired

In October 1944, Coolidge took command of a small group of men when they encountered a German force, estimated to be a company, in the woods near the French village of Belmont-sur-Battant. For four days, through the rain and cold, Coolidge rallied his men and beat back one German attack after another.

When the Germans made a final assault, with two tanks in tow, Coolidge tried to take them out with a bazooka. When the bazooka malfunctioned, he threw it away, grabbed as many grenades as he could carry, and hurled them at the German infantry. When it became clear the Germans would overrun their position, Coolidge organized his men in an orderly withdrawal and was the last to leave.

Until his April 6 death in Chattanooga, Tenn., Coolidge was the oldest living Medal of Honor recipient.