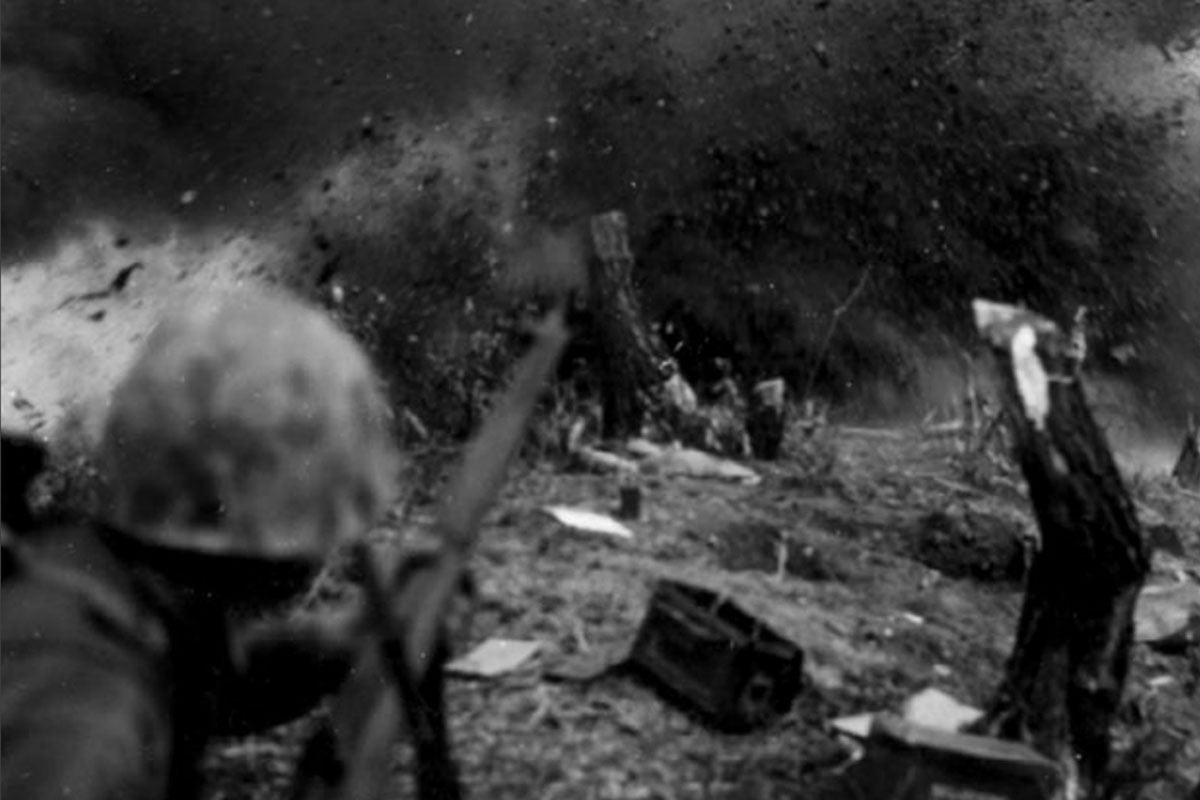 Marine Cpl. Salvatore Naimo was awarded the Silver Star on March 17, 2021 — his 89th birthday — for actions that took place when he was a member of 3rd Battalion, 5th Marine Regiment nearly 70 years ago. In September 1951 Naimo, a rifleman in “Howe” Company, found himself in the midst of bitter fighting along the 38th parallel, fighting for “the Punch Bowl.” High casualties among Naimo’s company meant his heroism was nearly lost to history.

The year 1950 had seen maneuver warfare up and down the Korean Peninsula with the Communist North sweeping aside allied resistance in June 1950 until the desperate defense of the Pusan Perimeter. Gen. Douglas MacArthur regained allied initiative with a brilliant counteroffensive landing Marines at Inchon in September 1950.

With Marines spearheading an Allied sweep North to the Yalu River, MacArthur all but guaranteed victory by the end of 1950 by declaring troops would be “Home by Christmas.” China entering the war in November 1950 once again changed the balance, leading to the fabled “Battle of the Chosin Reservoir” and a mass retreat south by Allied forces on the peninsula. By the summer of 1951, they were increasingly locked in stalemate with the front lines settling along the 38th parallel.

June 1951 began with armistice talks, but they began to fall apart by the end of summer. In August 1951, in an effort to drive the North Koreans and Chinese back to the negotiating table, Naimo, along with some 30,000 other members of the Allied task force, found themselves attacking a mountainous region on the far eastern part of the 38th parallel in what would become known as The Battle of the Punch Bowl.

The operation lasted from Aug. 31 until Sept. 21, 1951, and featured frequent and vicious engagements in mountainous terrain resulting in at least 5,000 Chinese and North Korean dead. On the Allied side, 69 Americans and 122 South Koreans would be killed in action and more than 1,000 Allied troops wounded.

On the morning of Sept. 14, 1951, Naimo and his fellow members of Howe Company were digging into a key ridge atop the Punchbowl, with Naimo’s platoon occupying the far left flank of Howe Company’s position. Suddenly, the Chinese Army began to drop well-aimed and concentrated mortar fire on the Marines, effectively suppressing the company.

With a mortar scoring a direct hit on the position adjacent to his, and critically wounding two Marines, cries for help rang out. Naimo immediately rushed from his position to the aid of his fellow Marines. Picking up the first wounded Marine and rushing back out into the barrage, Naimo proceeded to carry him toward the aid station when another round detonated — this time wounding Naimo and knocking him to the ground. Undaunted, Naimo picked up his fellow Marine and pressed on, reaching the aid station.

“The normal reaction when under fire is fear; that is the reaction. It’s a very difficult and deliberate decision to act, especially to put yourself at risk to save or protect your fellow Marine,” said Col. John Polidoro, chief of staff, US Marine Corps Forces, Central Command, who awarded the Silver Star on behalf of the Commandant of the Marine Corps.

It was at this point in the engagement that Chinese forces began transitioning from indirect “prep” fire into a ground attack on Howe Company’s position. Observing Chinese soldiers advancing up the hill, Naimo once again ignored his own wounds and sprang into action. He jumped into a fighting position and began firing his weapon and throwing grenades into the ranks of the advancing enemy. Naimo continued to do this until he was nearly out of ammunition and the Chinese assault broke on Howe Company’s rocky ridge.

“I earned this for something I was trained to do,” Naimo said.

While immediately recognized for heroism by his platoon commander, Naimo waited 70 years before being awarded — two days after this engagement, and before he could submit the paperwork, Naimo’s platoon commander was killed in action.

On his 89th birthday, Naimo, surrounded by family and friends rather than Marines, was presented the nation’s third highest award for valor.

“It doesn’t matter if the Marine’s actions took place yesterday, or 70 years ago, we will always ensure our Marines are recognized for their performance,” Polidoro said.