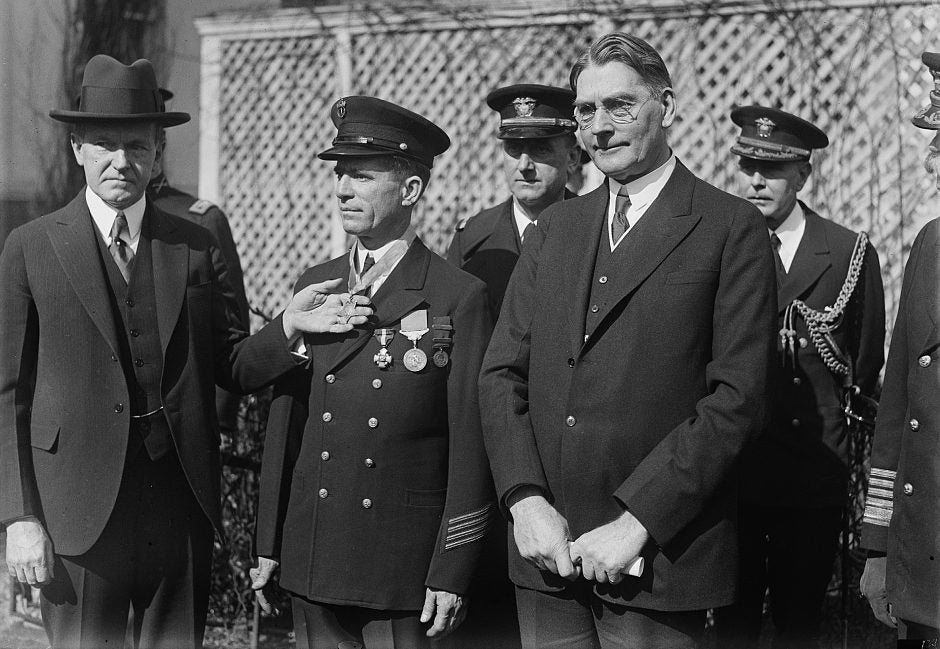 Chief Gunner’s Mate Frank William Crilley recognized the urgency unfolding 265 feet below the surface. Responding to a lost submarine in April 1915, a fellow Navy diver was operating at extreme depths when his life line and air hose became tangled in the hawser cables of a salvage ship. He could not ascend or descend without help. Crilley, a Navy diver with 15 years of experience in the fleet, immediately volunteered to don a diving suit and descend to reach Chief Gunner’s Mate William F. Loughman.

As Crilley entered the water off the coast of Honolulu, Hawaii, he knew that the US Navy didn’t want to lose any more sailors. A month prior, the USS F-4 submarine belonging to the 1st Submarine Group, Pacific Torpedo Flotilla, had plummeted to the ocean’s floor. An investigation later determined a corroded battery had caused an explosion, killing all 21 submariners.

It was the first underwater disaster for the US Navy. And despite attempts by four tugboats with the assistance of Navy divers to attach heavy lifting cables around the submarine, their efforts at rescue or salvage had so far failed.

“Any attempt at raising the F-4 and rescuing any possible survivors presented the Navy with a situation in which [it] had practically no experience,” wrote Alfred W. Harris in a June 1979 edition of Sea Combat magazine. “While fires, explosions and numerous other types of accidents had occurred about other U.S. submarines, F-4 was the first of our boats to take her crew to the bottom, unable to return.”

Never had the US Navy successfully rescued or salvaged a submarine beyond 20 feet. The F-4 submarine lay 304 feet below the surface. Loughman had ascended to 265 feet when he began the struggle for his life.

Crilley braved the pressured depths, reaching 306 feet, where he could touch the side of the wrecked submarine. He needed to get a better angle to rescue his shipmate. No diver had previously ever reached such depths. In the two hours and 11 minutes it took to bring Loughman to the surface, the pair collectively experienced “depth narcosis” or underwater drunkenness — a condition that makes doing the most simple of tasks difficult.

The F-4 submarine was later salvaged and recovered in August 1915. Four members of the 21-member crew were identified and delivered to their families. The remains of the other 17 sailors were sealed in four coffins and placed together in Arlington National Cemetery under a single headstone that read “Seventeen Unknown US Sailors, Victims of USSF–4, March 25 1915.” In 2000, submarine veterans lobbied in Washington, and Arlington installed a larger joint headstone. The old headstone was delivered to the USS Bowfin Museum at Pearl Harbor and is the only headstone ever transferred from a national cemetery.