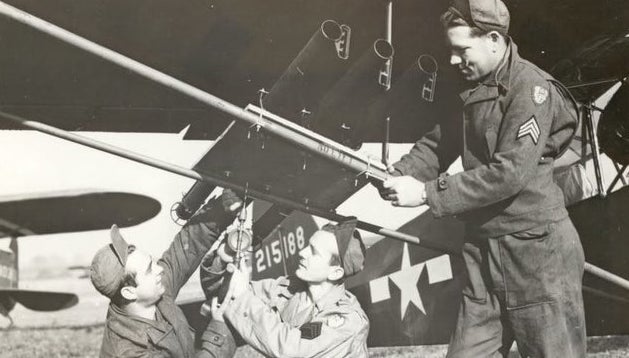 Charles Carpenter, or “Bazooka Charlie” as he’s now remembered, served as an Army pilot in the Second World War, tasked with locating enemy positions from the air for artillery bombardment. Aircraft like Carpenter’s unarmed L-4 Grasshopper were perfect for low-level, low-speed reconnaissance, but ol’ Bazooka Charlie aspired to do more than spot enemy tanks… he wanted to destroy them himself.

The Army’s L-4 Grasshopper, which is more commonly known by its civilian moniker, the Piper J-3 Cub, was an American design out of the Piper Aircraft firm that first went into production in 1938. Its simple strut-braced monoplane design made the aircraft extremely manageable at the sort of low, loitering speeds needed for a reconnaissance or military liaison aircraft. The Cub was so well suited for the role that the American military would eventually order more than 5,400 of the newly dubbed “L-4 Grasshoppers” for the fight.

But the Grasshopper’s performance and capabilities left a lot to be desired compared to some of the more legendary World War II planes like the acrobatic Spitfire, the powerful P-51 Mustang, or the forward-reaching B-29 Superfortress. The aircraft had room for one pilot and one passenger and was almost identical to the civilian-market cub, with the exception of a plexiglass skylight and rear windows for improved visibility in combat environments. With just the pilot on board, the Grasshopper would top out at 85 miles per hour, had a service ceiling of 12,000 feet, and could remain airborne for around three hours. It was also capable of flying very slowly–with a stall speed of just 38 miles per hour–which made it ideally suited not just for recon patrols, but for artillery spotting duties.

Of course, with a trained observer onboard carrying a 25-pound radio, the aircraft was often stuck operating while exceeding its intended weight parameters, but the plucky Grasshopper proved capable for its role, even if it wasn’t quite the war machine other aircraft of the day had become.

Charles Carpenter turned his Grasshopper into a tank-buster

Charles Carpenter signed up to serve in 1942, shortly after the United States entered the war. He was assigned the role of Grasshopper pilot and became an artillery spotter for the 4th Armored Division of General George Patton’s 3rd Army. Initially, the job was fairly safe–German troops rarely fired upon the unarmed scout aircraft for fear of giving away their position, which gave Carpenter a great deal of latitude when it came to performing his duties. As the war stretched on, however, Carpenter began to grow weary of his artillery spotter role, and began looking for ways to play a more active role in the fighting.

It wasn’t long before Carpenter found his way into the fight, jumping on a .50 caliber machine gun during an engagement with Nazi troops. After firing for a few minutes, Carpenter chose to lead a group of soldiers into the German-held town they’d come from and, despite not being their commander, the troops followed. In the midst of the fighting, Carpenter ordered the tank he’d jumped on to open fire on another vehicle that soon proved to be American. He was promptly arrested after the incident and threatened with a court martial… That is, until General Patton himself intervened on the young pilot’s behalf. It was after that close call that Carpenter decided to keep his fighting in the air.

Inspired by stories he’d heard from other unarmed scout aircraft, now Major Charles Carpenter decided to follow suit, strapping not one but six M1A1 bazookas to the wing struts of his Grasshopper. Aided by an ordnance tech and a crew chief, the bazookas were wired into the cockpit of the airplane and could be fired by flipping switches either individually or all at once. Each bazooka could fire a single rocket-propelled anti-tank grenade that could penetrate as much as three inches of armor plating. That was enough to take out a tank if you hit it in the right places (like on top) but would be practically useless against the Nazi armor when engaging head-on.

Bazooka Charlie and Rosie the Rocketeer

With his Grasshopper now equipped with enough firepower to rain holy hell down on his enemies, Carpenter took to calling his aircraft “Rosie the Rocketeer,” in honor of the cultural icon representing women working in factories and shipyards back home in the States. His plane wasn’t the only thing to get a new nickname though, and soon after he began flying with his bazookas Charles Carpenter became better known among the troops around him as Bazooka Charlie.

Carpenter’s first kill came quickly, eliminating a German armored car before upgrading some of his bazookas to the more capable M9 platform, which could fire the M6A3 High Explosive Anti-Tank rounds he’d need to go after bigger prey. Soon, the Germans began to realize that the crazy Grasshopper scouting them was just as capable of destroying vehicles as the artillery he guided, prompting them to fire on him any time he appeared in the sky.

“Word must be getting around among those Krauts to watch out for Cubs with bazookas on them,” Carpenter said at the time.

“Every time I show up now, they shoot with everything they have. They never used to bother Cubs. Bazookas must be bothering them a bit.”

Despite the hail of gunfire, Carpenter would dive his aircraft directly at Nazi tanks and open fire with his bazookas at only about 100 meters off the ground. Then he’d pull straight up, hoping to get back out of range of the enemy gunfire before they managed to shoot him down.

The “Mad Major” goes on the offensive

These exploits soon earned Bazooka Charlie yet another nickname: The “Mad Major.” Although Carpenter had been inspired by other pilots who had armed their aircraft, his wild successes at fighting armored vehicles inspired other artillery scout and reconnaissance pilots to follow suit, but according to press coverage at the time, the other pilots “found that driving their frail aircraft into a hail of German small arms fire was extremely unhealthy.” As a result, most returned to their less-dangerous observation duties.

Whether you knew him as Bazooka Charlie, the Mad Major, or just as Major Carpenter, the man tended to live up his larger-than-life reputation. At one point, he destroyed a German column advancing toward Allied troops and instead of flying back to base, he chose to land his aircraft in a nearby field to scout out the damage he’d wrought. While doing so, he managed to take an additional six German soldiers prisoner with a rifle he’d found on the ground–which, it probably goes without saying, was not a common practice among artillery scout pilots.

“Some people around here think I’m nuts,” Carpenter once said, “but I just believe that if we’re going to fight a war, we have to go on with it 60-minutes an hour and 24-hours a day.”

Not long after, Carpenter would match some of the exploits found among Spitfire pilots in the Battle of Britain, despite flying an aircraft that was never meant for combat. During a patrol, Carpenter found an American infantry unit pinned down by German soldiers and he sprung into action, engaging the German positions with his on-board weapons. When he ran out of firepower, he flew straight back to base and had the ordnance team re-arm his Grasshopper for another jaunt.

After expending all of his rockets again, he returned once more for re-armament. After flying three combat sorties into the fight, Carpenter had managed to destroy two German tanks and break up the Nazi attack. British pilots defending against Nazi bombers in the Battle of Britain would often fly multiple sorties a day in order to beat back the overwhelming Luftwaffe numbers, though they often used amphetamines to push through the exhaustion.

By the time World War II came to a close, Charles Carpenter was officially credited with killing six Nazi tanks, making him an official “tank ace,” though many claim his unofficial number was actually much higher. According to some accounts, Carpenter and his airplane Rosie the Rocketeer took out at least 14 Nazi tanks, a number of other armored vehicles, and dozens of enemy soldiers. He never took so much as a scratch from enemy fire, earning him one more nickname among the Allied troops he fought alongside: the Lucky Major.

With the war at an end, Carpenter was promoted to Lieutenant Colonel and awarded a Silver star, a Bronze Star, and an Air Medal with Oak Leaf Cluster for his heroic service, but with no more Nazi tanks to fight from the sky, the legendary pilot hung up his flight suit and went right back to work in the profession he had prior to the war, as a high school history teacher.