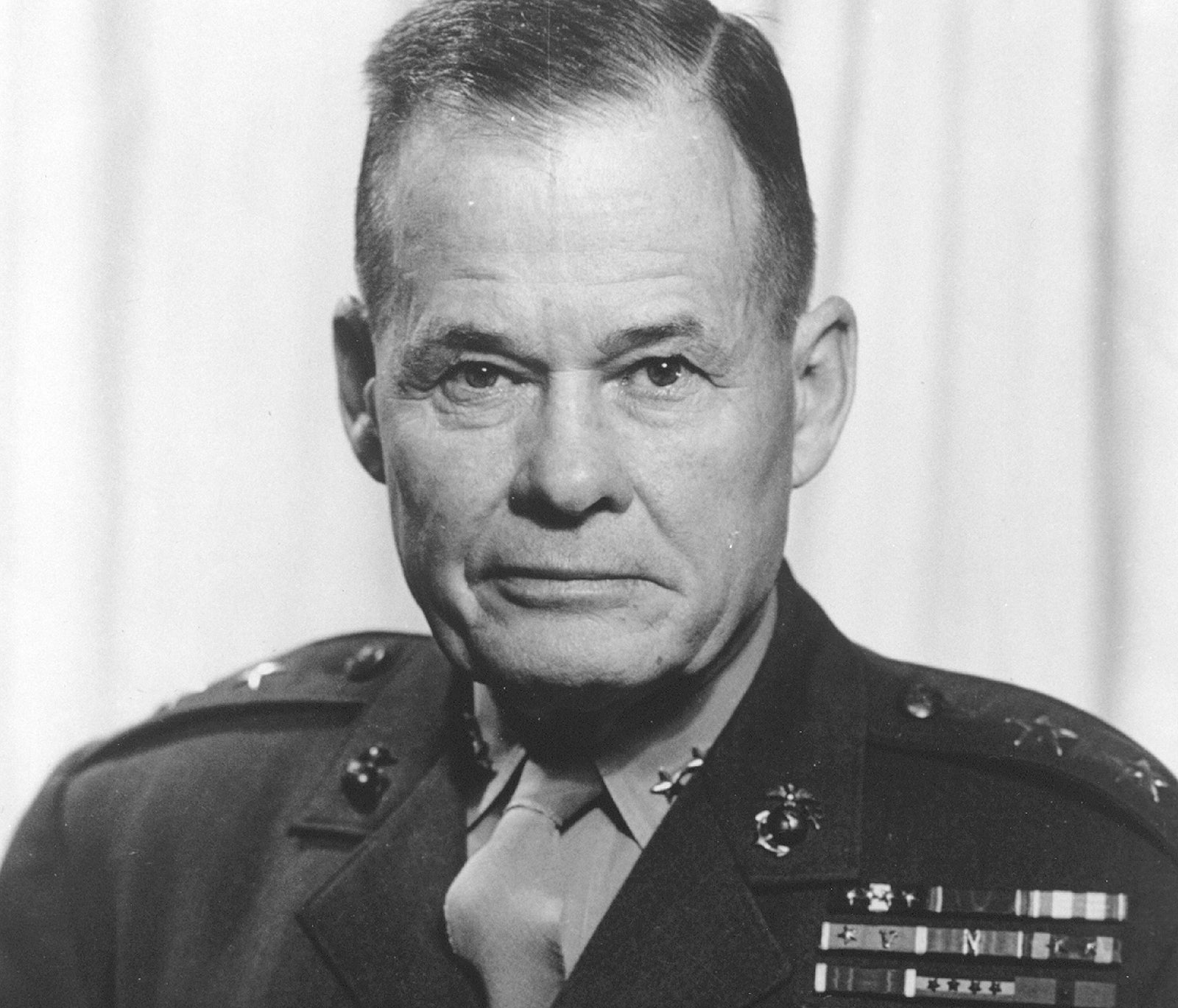 Lewis Burwell “Chesty” Puller is something like a god to United States Marines. To call Chesty a legend feels like an understatement for any Marine who has been properly indoctrinated in the ways of the World’s Finest Fighting Force. Marines are taught in boot camp about the most decorated Marine in the service’s history.

Over a 37-year career in the Corps, Chesty rose from the rank of private to lieutenant general. He saw combat in numerous conflicts and earned an unprecedented five Navy Crosses, a Distinguished Service Cross, and a Silver Star Medal. The Navy Cross is the nation’s second-highest military award for valor in combat — second only to the Medal of Honor. The Distinguished Service Cross is the Army equivalent of the Navy Cross, which is awarded by the Navy and Marine Corps. The Silver Star is the United States’ third-highest military award for valor in combat.

While most Marines are familiar with Chesty’s chest candy, the stories behind his biggest awards are less known. Strap in, folks.

As a first lieutenant, Chesty earned his first Navy Cross for commanding a Nicaraguan National Guard unit. From February through August 1930, Chesty led five successful engagements against superior numbers of armed bandits, completely routing the enemy forces each time, according to his award citation.

“By his intelligent and forceful leadership without thought of his own personal safety, by great physical exertion and by suffering many hardships, Lieutenant Puller surmounted all obstacles and dealt five successive and severe blows against organized banditry in the Republic of Nicaragua,” his citation reads.

Chesty earned his second Navy Cross while commanding a 40-man Nicaraguan National Guard patrol from Sept. 20 to Oct. 1, 1932. The first lieutenant and his men patrolled nearly 100 miles north of their nearest base, penetrating deep into isolated mountainous bandit territory. Chesty’s patrol was ambushed Sept. 26 “by an insurgent force of 150 in a well-prepared position armed with not less than seven automatic weapons and various classes of small arms and well-supplied with ammunition,” according to Chesty’s award citation.

After a Nicaraguan soldier was killed by the initial burst of fire and Chesty’s second in command was seriously wounded and reported dead, the legendary combat leader went to work.

“With great courage, coolness and display of military judgment, [Puller] so directed the fire and movement of his men that the enemy were driven first from the high ground on the right of his position, and then by a flanking movement forced from the high ground to the left and finally were scattered in confusion with a loss of 10 killed and many wounded by the persistent and well-directed attack of the patrol,” the award citation reads. “This signal victory in jungle country, with no lines of communication and 100 miles from any supporting force, was largely due to the indomitable courage and persistence of the patrol commander. Returning with the wounded to Jinotega, the patrol was ambushed twice by superior forces on Sept. 30. On both occasions the enemy was dispersed with severe losses.”

Chesty earned his third Navy Cross as commanding officer of the 1st Marine Division’s 1st Battalion, 7th Marine Regiment, on the Pacific island of Guadalcanal in World War II. On the night of Oct. 24-25, 1942, Lt. Col. Puller’s battalion was holding a mile-long defensive front under heavy rain and in some areas of dense jungle when a massive Japanese force launched a violent assault against the Marines.

“Courageously withstanding the enemy’s desperate and determined attacks, Lieutenant Colonel Puller not only held his battalion to its position until reinforcements arrived three hours later, but also effectively commanded the augmented force until late in the afternoon of the next day,” Chesty’s award citation reads. “By his tireless devotion to duty and cool judgment under fire, he prevented a hostile penetration of our lines and was largely responsible for the successful defense of the sector assigned to his troops.”

The famous battle at Guadalcanal was immortalized in HBO’s The Pacific miniseries, which also recounts in inspiring detail the heroic actions of Gunnery Sgt. John Basilone (another highly decorated Marine legend) and Chesty’s push for Basilone to receive the Medal of Honor.

Fourth Navy Cross, Battle of Cape Gloucester on the island of New Britain

Chesty earned his fourth Navy Cross while serving as executive officer of the 7th Marines during the Battle of Cape Gloucester on the island of New Britain from Dec. 26, 1943, to Jan. 19, 1944.

“Assigned temporary command of the 3rd Battalion, 7th Marines, from Jan. 4-9, Lieutenant Colonel Puller quickly reorganized and advanced his unit, effecting the seizure of the objective without delay,” his award citation reads. “Assuming additional duty in command of the 3rd Battalion, 5th Marines Jan. 7-8, after the commanding officer and executive officer had been wounded, Lieutenant Colonel Puller unhesitatingly exposed himself to rifle, machine-gun and mortar fire from strongly entrenched Japanese positions to move from company to company in his front lines, reorganizing and maintaining a critical position along a fire-swept ridge. His forceful leadership and gallant fighting spirit under the most hazardous conditions were contributing factors in the defeat of the enemy during this campaign.”

Known for its miserable subzero conditions and nightmarish brutality, the Battle of the Chosin Reservoir holds a special place in Marine Corps lore (the gut-wrenching documentary Chosin does a great job of capturing the absolute hell that battle was), and Chesty Puller had a pretty big role there. So central that his actions at Chosin earned him his fifth Navy Cross and his only Distinguished Service Medal.

As a colonel, Chesty was serving as commanding officer of the 1st Marine Regiment when he learned his Marines were completely surrounded by tens of thousands of Chinese soldiers and famously declared, “We’ve been looking for the enemy for several days now, we’ve finally found them. We’re surrounded. That simplifies our problem of getting to these people and killing them.”

During the period of Dec. 5-10, 1950, “Colonel Puller drove off repeated and fanatical enemy attacks upon his regimental defense sector and supply points,” his award citation reads. “Although the area was frequently covered by grazing machine-gun fire and intense artillery and mortar fire, he coolly moved along his troops to insure their correct tactical employment, reinforced the lines as the situation demanded, and successfully defended the perimeter, keeping open the main supply routes for the movement of the Division. During the attack from Koto-ri to Hungnam, he expertly utilized his Regiment as the Division rear guard, repelling two fierce enemy assaults, which severely threatened the security of the unit, and personally supervised the care and prompt evacuation of all casualties. By his unflagging determination, he served to inspire his men to heroic efforts in defense of their positions and assured the safety of much valuable equipment, which would otherwise have been lost to the enemy. His skilled leadership, superb courage and valiant devotion to duty in the face of overwhelming odds reflect the highest credit upon Colonel Puller and the United States Naval Service.”

Apparently Chesty bolstered his Battle of Chosin bling and scored the Army’s equivalent of the Navy Cross for his actions Nov. 29 to Dec. 4, 1950. Chesty’s citation for this award is sparse on details but cites his “extraordinary heroism in connection with military operations against an armed enemy of the United Nations while serving as commanding officer, 1st Marines […] Colonel Puller’s actions contributed materially to the breakthrough of the 1st Marine Regiment in the Chosin Reservoir area and are in keeping with the highest traditions of the military service.”

Before Chosin, Chesty pulled off an extraordinary feat when he executed Gen. Douglas MacArthur’s bold gamble to change the course of the Korean War with an amphibious landing of forces at the Port of Inchon.

The Marine Corps Times reported in 2019, “The bold landing at Inchon was a major gamble by MacArthur. Critics of the Army general’s plan noted Korean defenses, a heavily mined approach to the port and obstacles like seawalls.” MacArthur, who commanded American and United Nations forces during the Korean War, awarded the Silver Star to Chesty as a symbol of respect for the Inchon landing.

Chesty’s Silver Star citation highlights his “conspicuous gallantry and intrepidity while commanding the 1st Marines, FIRST Marine Division (Reinforced), in action against enemy aggressor forces during the amphibious landing resulting in the capture of Inchon, Korea, on Sept. 15, 1950, in the Inchon-Seoul Operation. His actions contributed materially to the success of this operation and were in keeping with the highest traditions of the Military Service.”

At this point, any Marine reading this listicle should be standing at attention and saluting while sounding off with a chesty “OOHRAH! Semper Fi!”

Good night, Chesty Puller, wherever you are.