These were America's first African-American paratroopers - We Are The Mighty

These were America’s first African-American paratroopers 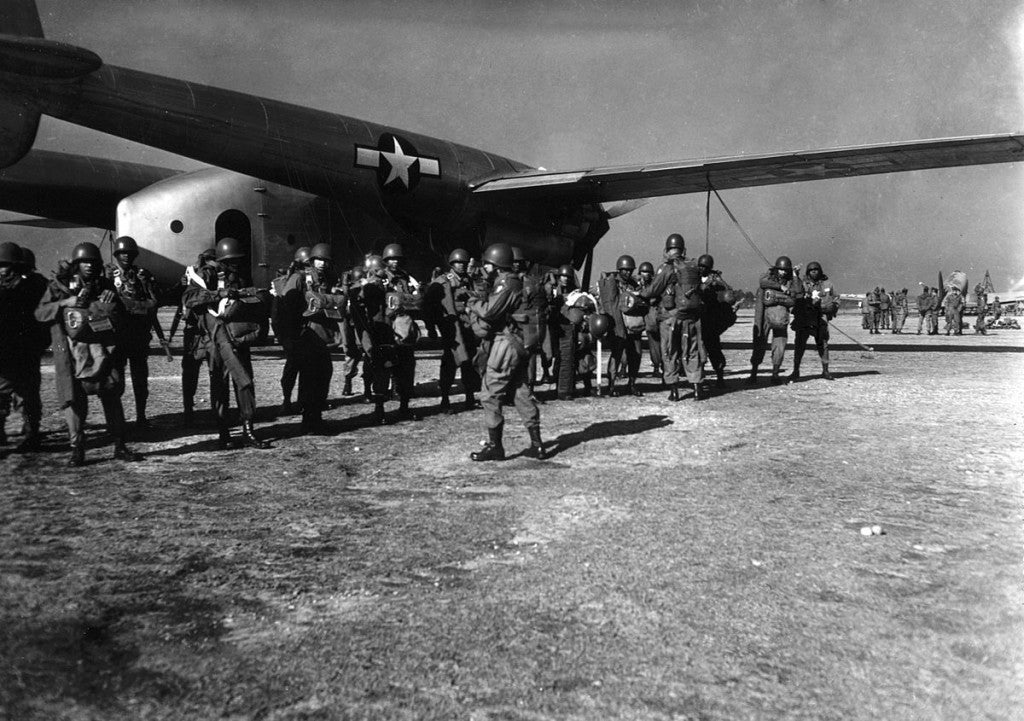 During World War II a company of service soldiers became the world’s first Black paratroopers and then made history as smokejumpers.

It started in 1942 when 1st Sgt. Walter Morris, an E-5 who had taken responsibility for his company because no first sergeant was assigned to it, crafted a plan for improving horrible morale.

The men were assigned to the U.S. Army Airborne School at Fort Benning, but were afforded none of the privileges other soldiers had and even lacked access to facilities that enemy POWs were allowed to use.

The men were assigned to cleaning the course after the white paratroopers finished training, and Morris simply had his men run it before they began cleaning. One day they were spotted making their way through the course by a passing general. The general ordered Morris to report to his office the next day. The general had received orders to start a Black airborne test platoon that would soon become a Black company and then airborne battalion. For his leadership of the service company, Morris was asked to become the unit first sergeant.

Morris and his men were officially re-assigned to the 555th Parachute Infantry Company, the Triple Nickles, in the final days of 1943. On Feb. 8, 1944, Morris and 16 others graduated Airborne School and became the first Black paratroopers.

The 555th quickly grew over the next year and Morris was sent to officer candidate school to become an officer so he could take another leadership role in what was now the 555th Parachute Infantry Battalion.

Unfortunately for the paratroopers of the unit, lingering racism kept them from the combat deployment to Europe that they were seeking.

They were instead loaned out to the U.S. Forest Service to defend the forests of the western states from Japanese incendiary bombs. The Japanese were floating thousands of balloons, each with four incendiary devices, across the Pacific to start wildfires in North America.

The Forest Service had decided to fight the tactic with “smokejumpers,” a new type of forest firefighter who jumped into the woods near the massive blazes and then created firebreaks to starve the flames of fuel.

Three hundred men were assigned to the mission, but only 160 were sent to Pendleton, Oregon for retraining. Between them all, they conducted 1,200 individual jumps and completed 36 fire missions in the summer of 1945.

Smokejumpers carried special “letdown” ropes to climb down from trees in case they were hung up on the high branches, and the men of 555th crafted special face protection by wrapping chicken wire around football helmets.

The war and the Army smokejumper mission ended in 1945, and the Triple Nickle was sent to Fort Bragg, North Carolina where the famed 82nd Airborne Division was headquartered. Maj. Gen. Jim Gavin, “The Jumping General” who commanded the unit, was impressed by the Black paratroopers and an early advocate of integration.

The unit trained and existed within the 82nd Airborne Division until Gavin ordered the men to an 82nd function in Dec. 1947. When the 555th commander presented his battalion to Gavin, the general ordered the unit fully integrated it into the 82nd as the 3rd Battalion, 505th Parachute Infantry Brigade.

While the men regretted the loss of the Triple Nickles, they celebrated being integrated into a storied unit.

“Everybody was crying,” former 555th paratrooper Charles Stevens told the Fort Jackson Leader. “I think we were crying for two different reasons. We were glad that segregation was leaving the Army and we were sad we were losing our Triple Nickle colors.”