How George Patton became the Army’s Master of Swords 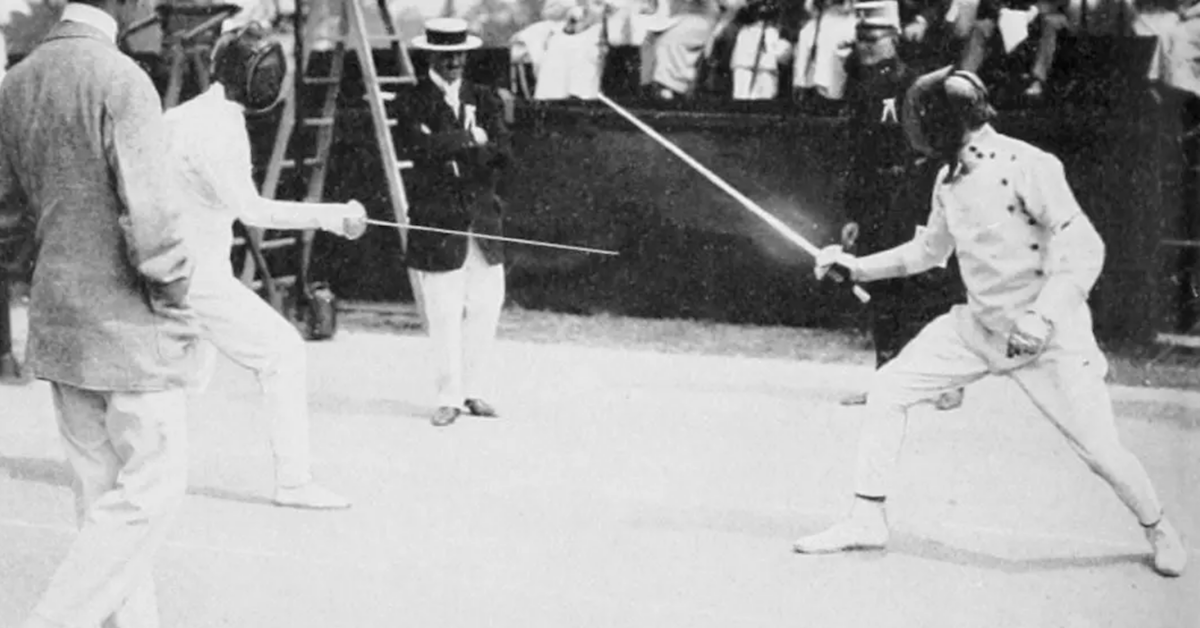 Patton (at right) fencing in the modern pentathlon of the 1912 Summer Olympics. (Wikipedia).

We’ve all heard of General George S. Patton. Maybe you’ve seen the movie. Maybe you did a report on him in school. Maybe you even have a grandfather who served under him in World War II. Maybe you’re a Cav or Armor troop. (Scouts out!) All of these and more are good reasons to know who this man was.

First, let’s cover some basics. Then we’ll jump right into stuff you may not know about this well-known — and sometimes notorious — United States Army General…

George Patton, Jr. (also known as George Smith Patton III) was born on November 11, 1885, in San Gabriel, California. He died following a car accident on December 21, 1945, in Heidelberg, Germany. He is buried at the American Memorial Cemetery in Luxembourg City, Luxembourg. In between those two bookends, he was a United States Army soldier and officer from 1909, until his death. As an officer, he commanded the U.S. Seventh Army and the U.S. Third Army during World War II — in the Mediterranean theater, in France and Germany, respectively. He was nicknamed “Bandito” and “Old Blood and Guts.”

Now, that’s enough with what you probably already knew. Let’s dive into the obscure; like what led to Patton being the Army’s master sword instructor.

As a junior officer, Patton was chosen to represent the United States at the 1912 Olympic Games in Stockholm, Sweden. He was selected to compete in the first modern pentathlon, a sport invented by the man who revived the Olympics and founded the modern Olympic Games, Baron Pierre de Coubertin. Patton was chosen based on his history with fencing at both the Virginia Military Institute and the United States Military Academy at West Point. Fencing is one of the five sports found within the modern pentathlon, along with 200m freestyle swimming, equestrian show jumping, pistol shooting, and 3200m cross country running. Patton finished fifth overall, and first among the non-Swedes in the event.

Coubertin considered the Pentathlon to be the core of the Olympic spirit. He was inspired by the ancient pentathlon from the original Olympics, which required the skills of an “ideal” Greek soldier. Coubertin created the modern pentathlon based around the skills of a 19th-century cavalry soldier behind enemy lines: “He must ride an unfamiliar horse, fight enemies with pistol and sword, swim, and run to return to his own soldiers.”

Even Gen. George Patton himself noted the difference(s) between his event at the 1912 Olympics, and other “non-military” events:

“The high spirit of sportsmanship and generosity manifested throughout speaks volumes for the character of the officers of the present day. There was not a single incident of a protest or any unsportsmanlike quibbling or fighting for points which I may say, marred some of the other civilian competitions at the Olympic Games.”

“Each man did his best and took what fortune sent them like a true soldier, and at the end we all felt more like good friends and comrades than rivals in a severe competition, yet this spirit of friendship in no manner detracted from the zeal with which all strove for success.”

Once he wrapped up the 1912 Olympics in Sweden, after some work and travel in Germany, Patton traveled to France in order to train directly with the French swordsman and Master of Arms, Adjutant Charles Cléry, at their Cavalry School in Saumur. Cléry was known throughout Europe, at the time, as being the greatest military swordsman. There, Patton picked up several tactics that were specific to French cavalry swordsmanship: stabbing, rather the slashing, for the most part.

The French penchant for piercing over slashing dated back to their heavy cavalry units during the Napoleonic Wars. The French determined/rediscovered that piercing wounds figured into a far larger percentage of fatalities than simple surface cuts — something Roman Legions understood all too well 20 centuries prior.

Upon completion of his training commitments with the French swordmaster, Patton returned to the United States. Once back, he was temporarily assigned to the Office of the Army Chief of Staff. After a flurry of assignment changes, more advanced training back at Saumur, and some publications on his tactical and technical fencing insights, Patton finally unpacked his bags at the United States Army’s Mounted Service School in Fort Riley, KS, and began his new post as both Cavalry student and the Army’s first Master of the Sword (sword instructor).

This culmination found Patton penning his 1914 Saber Exercise and his Diary of the Instructor in Swordsmanship. It also found the Army Ordnance Corps pumping out 20,000 new M1913 Cavalry Sabers (or “Patton Sabers”) based on his new designs, thus replacing the old hack & slash sabers.

In the middle of all of this, Patton was once again chosen to represent the United States as a Pentathlete at the 1916 Olympics… though those games were canceled due to World War I.

As revolutionary as Patton’s sword tactics (both mounted and dismounted) and sword design were, by the time they reached the line units preparing for combat, they were already obsolete.

So, to recap, one of America’s most famous/infamous generals — who led millions of tons of tanks into the heart of Nazi Germany, and who was both feared and respected by his enemies on the field of battle — dug his roots deep into the soil of swordsmanship and understood that the microcosm of combat is just two dudes or dudettes with weapons in-hand trying to bring their opponent down.

And, as to that, Gen. George Patton’s ability to adapt horseback-mounted, bladed combat into his then-modern, lethal counter-Blitzkrieg armored tank warfare is certainly a testament to the lengths a dyed-in-the-wool troop will go to win a war.

So just remember: The dude who helped defeat Nazi Germany on the back of a tank was once the United States Army’s Master of Swords, and he literally wrote the book on the subject (several of them, actually).