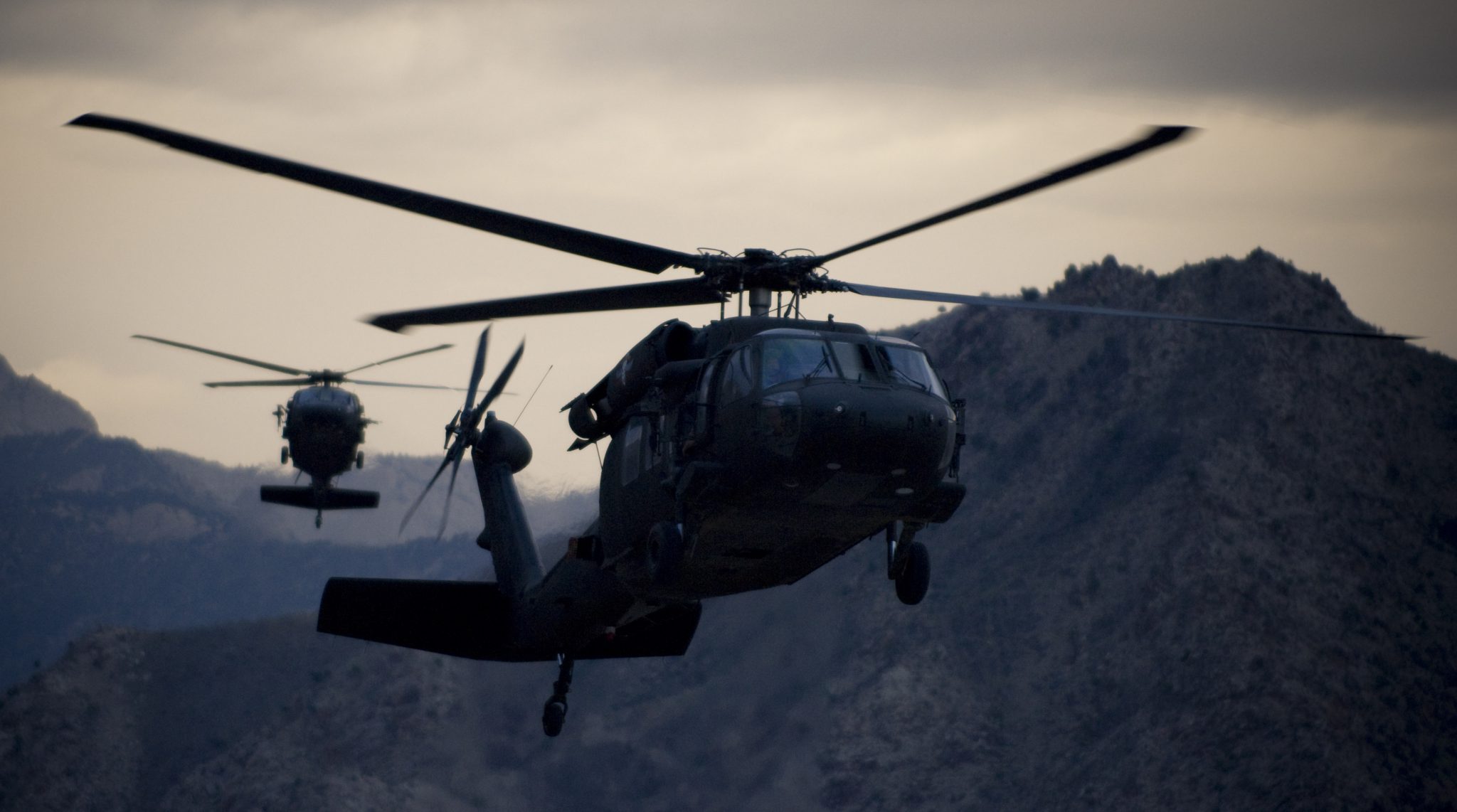 Carrying troops into combat, or at least close enough that they can walk to it, was a fairly basic art for thousands of years. Horses or boats did the job until motorized vehicles started to be used in large numbers in the beginning of the 20th century.

During World War II, airborne and glider troops made mass assaults with thousands of troops possible at long ranges. While this was a huge leap forward, airborne operations came with some major liabilities. As seen during the D-Day landings, the accuracy of these drops was lacking, and troops could end up far from their intended drop zones. Just as importantly, parachutes and gliders were both one-way trips, and troops were largely on their own until their leg counterparts could catch up.

Helicopters promised to change all that. Which helicopter was officially “first” is subject to some dispute, but vertical flight was largely a novelty for many years. Toward the end of World War II, some primitive rotary-wing aircraft saw limited action in the Pacific doing rescue missions, but they were far from a decisive arm.

After World War II, the Marine Corps first saw the utility of helicopters in an air assault role. As the service contemplated how amphibious assaults would remain viable in the Atomic Age, it concluded that the ability to cover much greater distances would be necessary. The Corps stood up Marine Helicopter Squadron One, HMX-1, and experimented with employing helicopters in amphibious warfare, developing the first doctrine on the subject.

The Korean War launched the helicopter from infancy to adolescence. The Marine Corps performed the first mass resupply via helicopter on Sept. 13, 1951. Marine Helicopter Transport Squadron 161 (HMR-161) used HRS-1 helicopters to deliver 74 Marines and more than 18,000 pounds of supplies to an area known as the Punchbowl. A week later, they performed the first combat troop lift, delivering 224 Marines to a hilltop in the area.

It took nearly two more years for the Army to perform its first helicopter assault, but true to form, it was bigger than the Marines’. On July 13, 1953, Army H-19 helicopters of the 1st Transportation Helicopter Battalion lifted more than 800 Republic of Korea troops.

The Kennedy administration’s focus on “brushfire wars” and shift to a doctrine of “flexible response” contrasted with Eisenhower’s “massive retaliation” and gave birth to what the Army would call “air assault.” Secretary of Defense Robert McNamara insisted on increasing the tactical mobility of the US Army. Under Lt. Gen. Hamilton Howse, the Army conducted a series of experiments at Fort Bragg in the early 1960s, leading to the formation of the 11th Air Assault Division at Fort Benning, which soon became the 1st Cavalry Division (Airmobile).

The “1st Air Cav” became one of the most storied units of the Vietnam War, which became known as the “helicopter war.” Given the terrain and the enemy insurgency in that conflict, helicopters — usually the UH-1 “Huey” — gave US forces a tactical advantage. Large insertions of troops into “hot” landing zones would become a trademark of the conflict, and ultimately, more than 5,000 of the roughly 12,000 helicopters used during that war were lost.

After Vietnam, the Marines returned to their traditional focus on amphibious assault and using helicopters accordingly. The Army returned to focusing on Europe and deterring the Soviet bloc. Helicopters, now mostly the UH-60 Black Hawk instead of the Huey, formed the most mobile element first in “Active Defense” and later in “AirLand Battle.”

Fortunately, Europe never needed American helicopter assaults to save it, but 1991 gave those aircraft a chance to shine. The 101st Air Assault Division mounted a brigade-sized lift to envelop the northern flank of Iraqi troops defending Kuwait as part of Gen. Norman Schwarzkopf’s famous “left hook” attack. The operation validated the utility of helicopter-borne forces in maneuver warfare, as opposed to the counterinsurgency role they served in Vietnam.

In almost a “back to the future” moment, after 9/11, helicopters once again became the preferred tool to maneuver quickly against enemy insurgents, first in Afghanistan and later in Iraq. While generally on a smaller scale than the largest assaults of the Vietnam era, tactical movement by helicopter has been essential throughout what became known as the Global War on Terror.

Modern helicopter insertions look different from those in Vietnam. Insertions into hot landing zones are rare, and losses are less common. This can be attributed to improvements in intelligence, surveillance, and reconnaissance (ISR) technology, as well as tactics. While there have been some failures, such as Operation Anaconda, by and large, helicopters have been key to major successes, including the raid that killed Usama bin Laden in 2011.

As the military exits Iraq and Afghanistan and shifts toward potential threats in the Pacific, the role of the helicopter will undoubtedly change once again. The mobility helicopters provided in the geographical constraints of Vietnam and Afghanistan seems limited in comparison with the vastness of the Pacific.

Vietnam-era Hueys could fly around 120 knots for about 275 miles. The Black Hawks that succeeded them in the US Army can reach 150 and about 300 miles in a basic configuration. A big leap in performance will be necessary if rotary-wing aircraft are to remain a part of future war plans.

The Marine Corps, with its amphibious mission, had to face this problem much sooner. The Marines invested in the MV-22 Osprey tilt-rotor, which cruises nearly twice as fast and flies twice as far as traditional helicopters. The Marines first deployed the Osprey in 2007 and replaced the last of its CH-46 helicopters with it in 2017.

The Army will have to invest in a similar capability to prepare for the type of conflict envisioned in the National Defense Strategy. It is moving ahead with the Future Long-Range Assault Aircraft program, which aims to produce an aircraft with the necessary speed and range to fight in tomorrow’s battlefields. Both Bell and a joint Sikorsky-Boeing team are competing, but whichever wins, it’s a certainty that air assault will continue to have a long future.